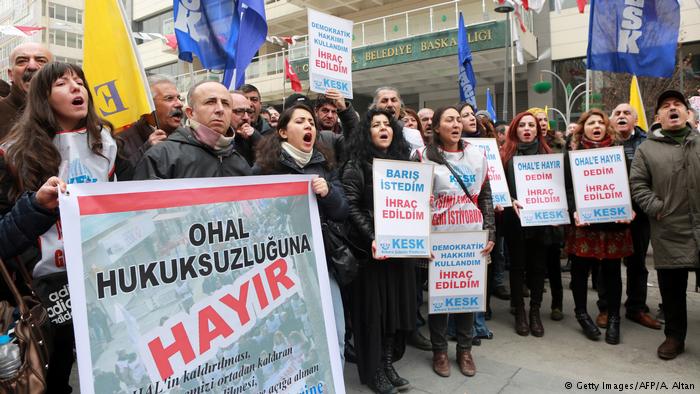 Amnesty International criticized mass sackings of public sector workers in Turkey in the wake of last July’s attempted coup, with a report issued on Monday saying that the dismissals were “carried out arbitrarily on the basis of vague and generalized grounds.”

The report said that the scale of the sackings, and the fact that trade unionists, political and human rights actitivists and government critics were among those fired from their positions, “increase[d] concerns that a great many dismissals were arbitrary, unfair and/or politically motivated.”

Since the failed coup, Ankara has dismissed more than 100,000 public sector workers under state-of-emergency regulations. According to the report, they have affected members of the armed forces, police officers, teachers, doctors, academics and people working at all levels of central and local government.

Many of those fired were perceived to be followers of US-based Muslim cleric Fethullah Gulen, whom Ankara considers to have been behind the coup attempt.

“However, it is clear that a much wider group of people have been targeted,” the report says, adding: “None … have been provided with any explantation of the reason for their dismissal beyond the generalized allegation contained in the decrees” published in the Official Gazette.

The organization urged the Turkish government to end the arbitrary dismissals and to follow due procedure when imposing disciplinary sanctions. It also said the dismissed employees should have access to a fair and effective independent appeal mechanism and that those wrongfully sacked should be reinstated or compensated.

The government insists that those dismissed have access to an appeals commission, whose members were confirmed last week, but Amnesty said it was not an “effective domestic remedy.”

Erdogan vows fight against enemies as returns to lead party Turkey has also carried out tens of thousands of arrests

In addition to the sackings, more than 47,000 people have been arrested over alleged links to the Gulen movement under the state of emergency, which was imposed a few days after the failed putsch bid and has since been renewed several times. Although it is due to expire on July 19, President Recep Tayyip Erdogan said on Sunday that it would continue until there was “peace,” and gave no time limit.

Amnesty’s report was based on 61 interviews, including 33 with people who have been dismissed and others with Turkish officials, trade union representatives, NGOs and lawyers.

Western governments and human rights activists have vehemently criticized the crackdown by Ankara, but the Turkish government says the purges are needed to remove those in the public sector who are intending to destabilize the state.

US envoy to the UN will visit Syrian refugees in Jordan, Turkey

Erdogan visits Trump, amid much friction between US, Turkey