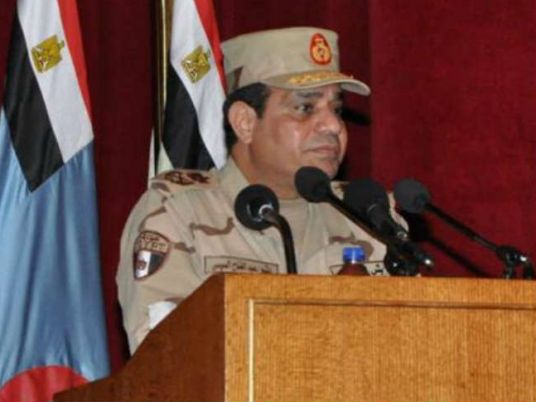 The April 6 Movement has made its first reaction to hints by Field Marshal Abdel Fattah al-Sisi, defense minister, over intentions to run for president.
The movement said Sisi’s nomination will not be in favor of the country and will not achieve the revolution goals, but only aggravate the crisis.
In a statement on Wednesday, the movement said, “Egypt’s progress and strength is not linked to personality or name of a potential president, but to the Egyptians’ will to build their country. No one can resolve the problems alone, but through unity among Egyptians and the state institutions without domination or control.”
“Egypt is witnessing a state of division and acute polarization. Everyone should place the interests of the country above personal ones,” it added.
The movement indicated that its opinion seeks the favor of the Egyptian military and its confidence, and that no citizen who loves the country should turn their back on society and allow division and polarization to fester.
It added that the only way to overcome such situation is to achieve interim justice, national reconciliation and peaceful coexistence among all diverse groups of society.
Edited translation from Al-Masry Al-Youm