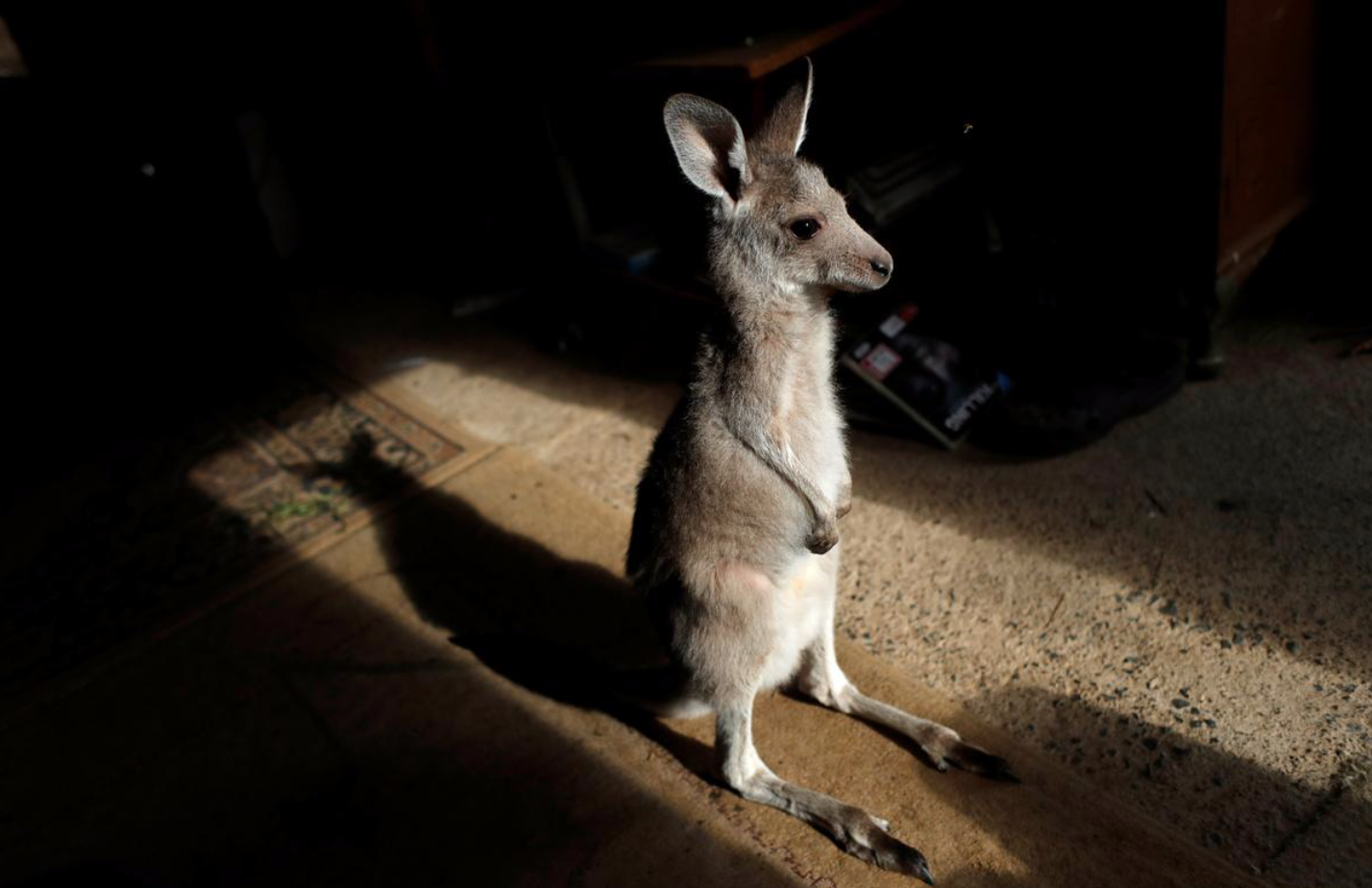 WYTALIBA, Australia (Reuters) — Even as a fierce bushfire bore down on the rural Australian community of Wytaliba, Gary Wilson and his partner Julie Willis decided not to flee their timber home — they had a house full of orphaned baby kangaroos to protect.

More than a dozen of the marsupials snuggled into fabric pouches hung in the couple’s living room, like stockings on Christmas Eve.

Full-grown kangaroos and other wildlife that had left their care long ago also came back to the house in search of refuge as the flames approached.

“We had way too many animals in the house and around the house so we really couldn’t go … we decided we were going to stay and fight,” Wilson told Reuters, at the couple’s off-the-grid home, now surrounded by scorched earth and burnt-out vehicles.

“At three o’clock it was a beautiful summer’s day, by four o’clock it was midnight,” Wilson said. “You couldn’t see any more than 20 yards and then the firestorm came through and pretty much burned everything.”

Wilson and Willis defended their home for at least 14 hours with fire extinguishers, water pumps and a sprinkler system on the roof that doused burning embers falling from the sky.

Good preparation and more than an ounce of luck meant the couple’s cypress-pine home still stands — and the motherless joeys survived. The Nov. 8 fire that swept through the small Wytaliba community, which was originally set up as a commune in the 1970s, killed two of Wilson’s neighbors.

“It was a horrible thing … the whole bush has been burnt. It’s been vaporized – it’s Vietnam is what it looks like,” Wilson said as infant kangaroos ate grain from a trough fashioned from a car tyre and lined up two-by-two to be bottle-fed special milk.

Willis said she had never seen fires so fierce, and that most animals, such as possums, gliders, echidnas, lizards and even many birds were not fast enough to escape the flames.

“It’s not until after the fires when it really hits you how close you were to dying but at the time you are too busy trying to put the fire out,” she said.

Australia’s prolonged bushfire season has killed 33 people and an estimated 1 billion native animals since September. About 2,500 homes have been destroyed and more than 11.7 million hectares (28.9 million acres) of tinder-dry bushland have been razed.

The number of boarders at the Wytaliba home, which has been a sanctuary for wildlife for 25 years, is ballooning as the fallout from the fires continues with burns, scarce food and ash-tainted water still devastating local wildlife.

While Wilson and Willis usually care for joeys rescued after their mothers are struck by vehicles, they are now hosting an increasing number of fire orphans.

Willis said the joeys, which are fed a special milk formula every two to four hours just like their human counterparts, will eventually be released back into the wild.

“We didn’t have children ourselves; this is what we spend our time doing,’ she said, as she gently stroked a joey on her lap while another nudged her feet. “We think it’s worthy – a worthy cause – looking after our babies no matter what they are, whether they are kangaroos, echidnas or wombats.”

Image: An orphaned kangaroo joey that was rescued during the bushfire season, stands inside the living room of partners Gary Wilson and Julie Willis’s home, both of whom are animal carers, in the community of Wytaliba, New South Wales, Australia January 28, 2020 (REUTERS/Jorge Silva)