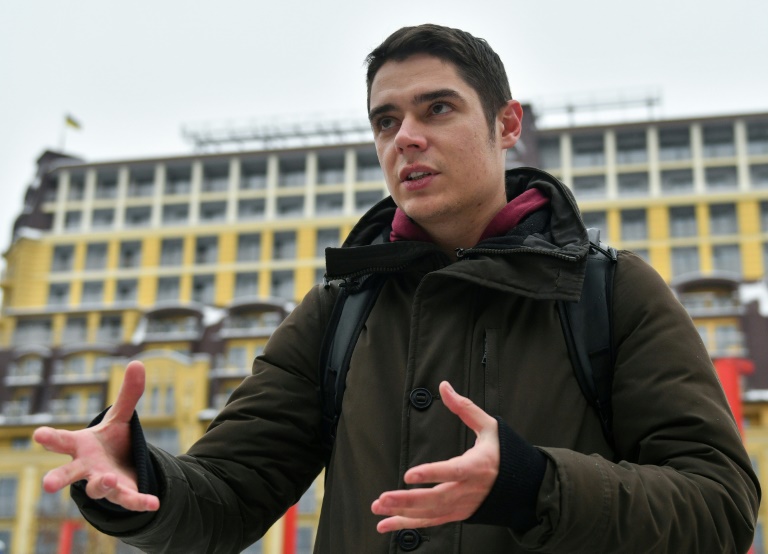 Last summer, Vitaliy Ustymenko was brutally attacked by two men in broad daylight in an assault he believes was linked to his work as an anti-corruption activist in Ukraine.

The number of such assaults on activists has soared, analysts say, as Ukraine struggles to rein in graft five years after a popular uprising partially motivated by rage over corruption.

Ustymenko, 25, was protesting against officials and businessmen building huge malls and luxury apartments in protected areas of the southern port city of Odessa.

“It is very difficult to carry out effective monitoring or preventative work,” said Ustymenko, who continues to organize protests on what he says are illegal construction sites.

Ustymenko knows the risks such monitors run. In June 2018, unknown assailants beat him and stabbed him in the lower back, leading to a hospital stay.

It was only after a wave of protests across the country against police inaction that the attackers were eventually tracked down. The pair remain in pre-trial detention.

But those who ordered the beating will likely never be found, with Odessa police officers under the thumb of a corrupt city hall, the activist said.

Odessa Mayor Gennadiy Trukhanov has long been accused of corruption, with investigators raiding his offices in 2017 as part of an embezzlement probe.

The Black Sea city’s authorities were accused of pocketing money from contracts assigned for repairing a highway and awarding loans that vanished but were meant to help refurbish the local airport.

Trukhanov denies all charges in the ongoing case.

The picture is no brighter for activists in other parts of the ex-Soviet nation.

“Over the past four years, we recorded about 100 attacks, half of which occurred during 2018,” Tetyana Pechonchyk, head of the Kiev-based Human Rights Information Centre, told AFP.

“We’ve had 10 murders of activists or human rights campaigners that may be related to their public activities. Five of them occurred in 2018,” she added.

Anti-graft activists, defenders of the environment and human rights campaigners had all been targeted, Pechonchyk said.

“After all the attacks, we have very few cases when instigators were found and brought to justice,” she said.

The Maidan protests in 2014 forced out a pro-Kremlin president and ushered in a new leadership that came to power on a promise to tackle endemic corruption.

The government launched a string of Western-backed anti-graft investigative bodies, but observers say these are toothless unless backed by judicial reform.

But while activists are finding instances of corruption, a culture of impunity and lack of institutional reform mean these cases of graft are not properly addressed, according to analysts.

“They understand that it is easy to organize attacks, even kill activists, and they will not be punished for that.”

In November last year, another campaigner died from injuries sustained during an acid attack.

Kateryna Gandzyuk worked as an adviser to the mayor of the southern city of Kherson and was an outspoken critic of corruption in law enforcement agencies.

An attacker poured around a litre of acid over the 33-year-old shortly after she left her home in the morning.

But months after Gandzyuk’s death, investigators have yet to find who ordered the assault.

Western nations called attacks on activists unacceptable and urged authorities to bring the perpetrators to justice.

Activists and analysts agree that major anti-corruption reform, including in the police and judiciary, must be completed in order to prevent further attacks.

“A strong state acting in accordance with the rule of law is the answer. … Those who act violently should be punished swiftly and without remorse,” Adrian Karatnycky, a senior fellow at the Atlantic Council think tank, wrote in a paper.

“The national authorities not only did not react, but indirectly supported these actions, because they felt the threat coming from activists to their power and incomes,” Dmytro Bulakh, chairman of the Kharkiv Anti-Corruption Center and also a victim of an attack, told AFP.