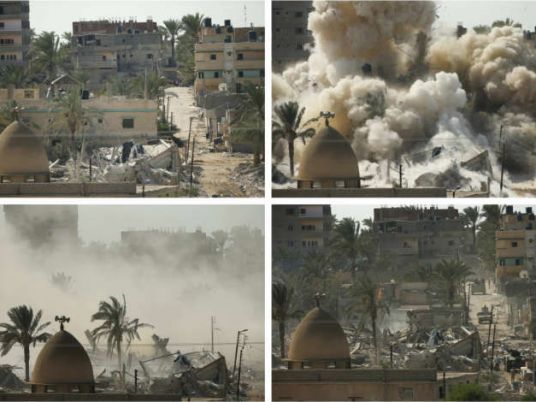 Authorities are in the process of responding to the deadly bombings that occurred Thursday throughout North Sinai that not only resulted in heavy casualties, but also caused considerable losses to properties in the surrounding areas.
Security sources said the North Sinai province building sustained major damages due to the blasts that occurred in Arish on Thursday when at least 27 military personnel and civilians were killed, with 36 injured, AP reported.
The surrounding buildings were significantly impacted by the bombing, destorying computers, offices and windows. Doors, windows and balconies collapsed at neighboring apartments and houses, while the glass facade of Al-Ahram newspaper’s local office was shattered. Other prominent offices severely damaged were the national museum in Arish, the local office for the National Council for Women, the governorate’s security department and the local military hospital.
Meanwhile, Major General Al-Sayyed Harhour said that efforts were underway for a newly-formed committee to estimate the damages of the 13 governmental buildings affected.
Streets in the eastern area of Rafah and Sheikh Zuweid were completely empty, as locals stayed in their home fearing further attacks. Citizens only cautiously left to perform Friday prayers.
Strict security measures were taken by police and military especially at entrances and exits of al-Salam district.
Armed forces raided several streets of Arish city. Dozens of armored vehicles headed to districts neighboring al-Masa’eed district in Arish. Roads leading to the raided areas were closed.
Security sources said a raid was carried out by armed forces under air cover of Apache helicopters in the areas of Rafah, Sheikh Zuweid and South Arish. The army killed and injured many alleged militants in the raid who were accused of being involved in the attacks.
Meanwhile, North Sinai security troops remotely detonated a bomb that was planted by unknown elements, meant to target passing armed personnel carriers. No injuries were reported. In response, the terrorist group Ansar Bayt al-Maqdis reportedly killed a Coptic citizen in his house, south of Arish city.
Edited translation from Al-Masry Al-Youm