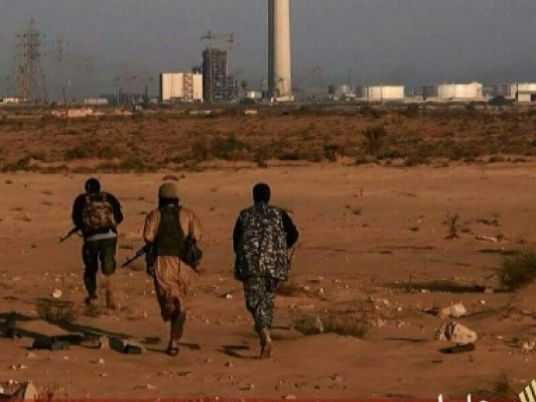 Islamic State group jihadists have beheaded 12 people and hung them on crosses during a battle for the coastal city of Sirte, the national news agency LANA reported Saturday.
The fighting for control of Sirte, hometown of slain dictator Moamer Kadhafi, has been raging since Tuesday, with one top Libyan diplomat warning of a "massacre" in the city.
LANA said the 12 people beheaded were local gunmen who had been battling IS in the eastern Sirte district known as "neighborhood three".
The agency also reported that IS militants executed 22 other Sirte residents who had taken up arms against the jihadist group as they lay wounded in a city hospital.
It said the jihadists also set the hospital on fire.
A Sirte city council official told AFP that clashes continued to rage on Saturday.
"There is continuous fighting, especially in neighborhood three, and the casualty toll is rising," said the unnamed official.
Libya's ambassador to France, Chibani Abuhamoud, told AFP on Friday that fighting in Sirte had left between 150 and 200 dead.
"A real massacre is taking place, and we call on the international community to intervene," the diplomat said.
The ambassador answers to Libya's internationally recognized government, which has taken refuge in the east of the country and is in a power struggle with a rival administration based in Tripoli.
Authorities in Tripoli, which was seized last year by a militia alliance known as Fajr Libya, announced on Tuesday the launch of an operation to liberate Sirte, 450 kilometers (280 miles) east of Tripoli.
Media loyal to the Tripoli authorities said warplanes were bombing armed groups linked to IS in Sirte.
The Libyan ambassador said the fighting erupted after IS assassinated earlier this week an influential imam from the powerful Al-Farjan tribe.
The jihadists have since been "massacring people, even killing people in their homes," Abuhamoud charged.
Late Friday, the Dar al-Iftaa Muslim organization that issues religious decrees issued a statement calling on Libyans to mobilize against IS.
"All Libyans able to carry weapons must mobilize to confront this cancer which is trying to destroy our Muslim nation," said the statement.
Libya has descended into chaos since the fall of Kadhafi in 2011.
It has two parliaments and two governments vying for power and a slew of armed groups and tribes fighting for its oil wealth and cities.
IS, which already controls large swathes of territory in Iraq and Syria, has exploited the chaos in Libya, notably taking control in June of Sirte.