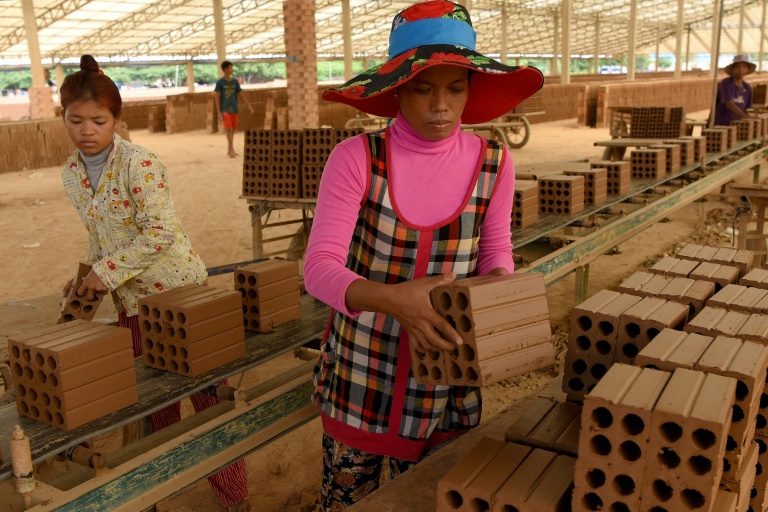 Bopha should be in school but instead toils seven days a week in a searing brick kiln on the outskirts of Phnom Penh — a 14-year-old trapped in debt bondage in a boom industry preying on the poverty of Cambodia’s farmers.

Saddled with debt from failed harvests, tens of thousands of farmers are turning to brick factories, where owners pay off their bills in exchange for labor.

The factories feed a surging construction sector, with high-rises cropping up around the capital Phnom Penh and beyond as money — much of it from China — pours in.

But for the farmers who shape and bake the clay bricks, Cambodia’s newfound urban prosperity has passed them by.

“I’m not going to school, I’m trying to help pay back the $4,000 that we owe, even if it will take years,” Bopha told AFP, as she loaded clay blocks on to a cart.

Cambodian labour law prohibits those aged 12-15 from working if the job is hazardous or interferes with their education.

Yet Bopha works all week with her family.

They were driven into the industry two years ago after drought ruined their rice harvest, leaving them with no way of paying back money they borrowed to plant crops.

A factory owner took over the debt and they went to work in the kilns about an hour’s drive from the capital.

There, a dirt road leading to the sprawling facility is lined with hundreds of kilns resembling small pyramids.

Bopha and her family are likely to be trapped for years as they try to clear their debts, in what campaigners warn amounts to modern-day slavery.

Like most workers interviewed for this article they asked that their full names not be used for fear of losing their jobs.

The University of London said in an October study that brick factories in Cambodia were creating a “multi-generational workforce of adults and children trapped in debt bondage -– one of the most prevalent forms of modern slavery in the world”.

And the link between climate change and debt bondage is stark, explains Naly Pilorge, head of Cambodian rights NGO Licadho.

“Many industries around the world employ climate refugees,” she said. “But what is unique in the brick factories in Cambodia is that the vast majority of workers are imprisoned in debt bondage.”

Compensation is not enough to pay off debts quickly, and the workers become virtual prisoners of owners who do not let them leave until they pay what they owe — with some living there indefinitely.

‘They ignore their rights’

Sov will soon be able to take a two-day holiday to return to her village in Stung Treng province in the north. But her husband and children must stay at the factory.

“The boss is afraid we will run away without paying,” she said, standing in a maze of bricks.

She started working at the factory two decades ago with a debt of $2,500. Now, at 57, she owes double that due to medical treatments and the cost of raising her children.

“I will have to leave this debt to my children,” she said.

Many workers have persistent health problems because of the smokey kilns, where men and women graft without gloves and masks. Complaints about respiratory or skin diseases, headaches and nosebleeds are common.

Dim Phally, 31, works in Thmey village with her husband. They have two kids.

When they went to borrow money, they were told by the brick factory owner to sign a document and pose for a photo holding the funds.

The contract says they have to pay back double if they try to escape. She still owes $1,500.

“I hope I can repay the owner and leave this place,” she said.

Sok Kin, president of the Building and Wood Workers Trade Union of Cambodia, said bosses can be violent, but he cannot recall a case where any were prosecuted.

As for the workers, “they don’t understand their rights and are afraid of losing their jobs”.

He called for a minimum wage to be established and a nationwide campaign to raise awareness among the workers of their rights.

The government has repeatedly said it will investigate the situation. The Ministry of Labor did not respond to a request for comment.

Owners of multiple brick factories declined to speak with AFP.

Many workers do not see things changing soon.

“And if we cannot repay it, we stay and work until our kids grow up and can help us.

Nearly half the world lives on less than $5.50 a day: World Bank