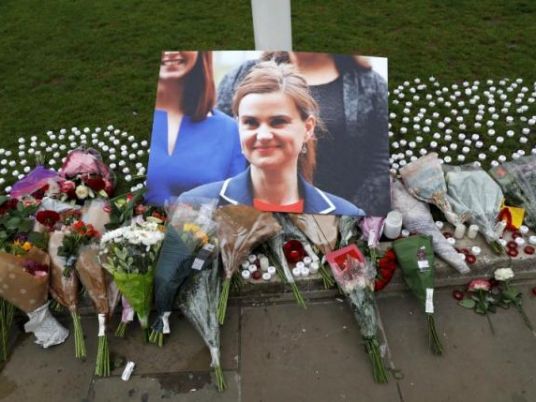 Britain mourned lawmaker Jo Cox on Friday after a man wielding a gun and knife killed the 41-year-old in an attack that has thrown a June 23 referendum on European Union membership into limbo.

Cox, a supporter of Britain staying in the EU, was shot and stabbed after a meeting with residents in her own constituency near Leeds in northern England by a man who witnesses said had shouted "Britain first".

She was pronounced dead just over 48 minutes later by a doctor working with a paramedic crew trying to save her life. A 52-year-old man named by media as Thomas Mair was arrested by officers nearby and weapons including a firearm were recovered.

The killing prompted campaigning to be suspended in the EU referendum, the tone of which has become increasingly angry and bitter and included personal recriminations as well as furious debate of issues such as immigration and the economy.

Though the motives of the killer were not immediately clear, some suggested sympathy for Cox could boost the Remain campaign which opinion polls indicate had fallen behind Leave.

Police said they were not in a position to discuss the motive of the attack.

"Jo believed in a better world and she fought for it every day of her life with an energy and a zest for life that would exhaust most people," Cox's husband, Brendan, said.

"She would have wanted two things above all else to happen now, one that our precious children are bathed in love and two, that we all unite to fight against the hatred that killed her."

A U.S. civil rights group the Southern Poverty Law Center (SPLC), based in Alabama, said on its website that it had obtained records showing a Thomas Mair had links with the neo-Nazi organization National Alliance (NA) dating back to 1999.

The SPLC posted images showing what it said were purchase orders for books bought by Mair, whose address is given as Batley, from the NA's publishing arm National Vanguard Books in May of that year. The orders included a manual on how to build a pistol, it said.

Britain's Union flag was flying at half-mast over the Houses of Parliament, Queen Elizabeth's London residence Buckingham Palace and Downing Street, where Prime Minister David Cameron has his official residence.

In Birstall hundreds of people attended a vigil at a local church. Queen Elizabeth was due to write a private letter of condolence to Cox's husband.

Some people, many weeping, laid flowers outside the Houses of Parliament. Beside a picture of Cox smiling, dozens of white candles lay beside bunches of flowers and a message board upon which people had written their condolences.

"You can't kill democracy," read one message on Parliament Square. Another said: "We will unite against hatred."

Others put flowers on the houseboat on the River Thames where Cox had lived with her husband and two young children aged three and five.

Beside flowers at the murder scene in Birstall, a message read: "Fascists feed on fear."

British politicians paid tribute to Cox and expressed shock at the killing, as did leaders across Europe and the world.

Cameron said the killing of Cox, who had worked on U.S. President Barack Obama's 2008 election campaign, was a tragedy.

"We have lost a great star," said Cameron, who called the referendum. "She was a great campaigning MP with huge compassion, with a big heart. It is dreadful, dreadful news."

Hillary Clinton said she was horrified. German Chancellor Angela Merkel called the attack "terrible" but added that she didn't want to link it to the EU referendum.

It was not immediately clear when campaigning for the referendum would resume. A spokesman for Vote Leave said they would clarify plans later in the day.

The implied probability of a vote to remain rose to 67 percent, up from 65 percent on Thursday, according to Betfair odds.

Media reports, citing witnesses, said the attacker had shouted out "Britain first", the name of a right-wing nationalist group that describes itself on its website as "a patriotic political party and street defense organization".

The deputy leader of the group, Jayda Fransen, distanced it from the attack, which she described as "absolutely disgusting".

West Yorkshire's elected Police and Crime Commissioner said "our information is that this is a localized incident, albeit one that has a much wider impact".

Family members, including his brother, said that Mair had not expressed strong political views, the Guardian newspaper reported.

"He has a history of mental illness but he has had help," the Guardian quoted his brother, Scott Mair, as saying. "My brother is not violent and is not all that political. I don't even know who he votes for."

Neighbors described a man who had lived in the same house for at least 40 years and helped locals weed their flowerbeds and inquired after their pets.

"I'm totally devastated — I didn't want to believe it. He's been very helpful to me. Anything I asked him to do he did very willingly and sometimes without my needing to ask," said next-door neighbor Diana Peters, 65.

"I saw him the day before. I was taking my cats to the vet and he came and asked me how they were," she said.

Gun ownership is highly restricted in Britain, and attacks of any nature on public figures are rare. The last British lawmaker to have been killed in an attack was Ian Gow, who died after a bomb planted by the Irish Republican Army (IRA) exploded under his car at his home in southern England in 1990.

Colleagues expressed shock and disbelief at the death of Cox, a Cambridge University graduate who spent a decade working for aid agency Oxfam and promoted women's issues.