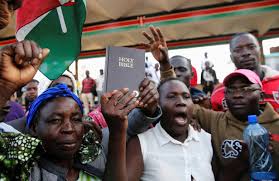 Kenyan authorities shut down private television and radio stations on Tuesday as thousands of supporters of opposition leader Raila Odinga gathered in a Nairobi park where he was due to take the presidential oath in an act of protest.

Odinga’s supporters insist that he, not President Uhuru Kenyatta, is Kenya’s legitimate leader, and that Kenyatta’s election was neither free nor fair.

Kenyatta’s election victory in August was nullified by the Supreme Court over irregularities, but he then won a re-run, which Odinga boycotted, and was sworn in for a second term in November.

The attorney-general had warned that Odinga could be charged with treason if the event went ahead – an offense that can carry the death penalty.

As thousands of people gathered in Uhuru Park, near Nairobi’s main business district, authorities began to force independent television and radio stations reporting on the gathering off air, several outlets said – the first such closures for about a decade.

Many of the protesters were chanting pro-Odinga slogans, waving tree branches and blowing horns and whistles.

“Odinga is the one we recognize as the president and that is why we are swearing him in,” said hairdresser Benta Akinyi, 32.

Although the police had said they would prevent any illegal assembly, there were no uniformed police in the park and no anti-riot officers or vehicles were visible. On the edge of the crowd, a single tear gas canister was fired.

Nearly 100 people were killed over the prolonged election period, mostly in clashes between Odinga supporters and police.

The local radio station Capital FM reported that Odinga’s supporters had been granted permission to use the park, but police and government spokespeople could not immediately be reached for comment.

“We intend to hold a peaceful event,” Odinga’s NASA alliance said in a statement late on Monday.

“We nonetheless wish to put the (ruling party) Jubilee administration on notice that we will accomplish our mission, come hell or high water. We advise our supporters to come prepared to stay until our mission is accomplished.”

By 10:20 a.m. (0720 GMT), a number of media outlets, including the independently-owned Citizen radio and television, NTV and KTN said that authorities had forced them off air. KTN had been showing a live video stream from the park.

A Communications Authority spokeswoman said its senior managers were in a meeting and would comment later.

“The Communications Authority of Kenya has switched off Citizen Television and Radio in most parts of the country over the coverage of the NASA ‘swearing-in’ plan,” Citizen said on its website.

On Monday, Linus Kaikai, chairman of the Kenya Editors’ Guild, said editors had been summoned by the authorities and warned that they could be shut down if they covered the event.