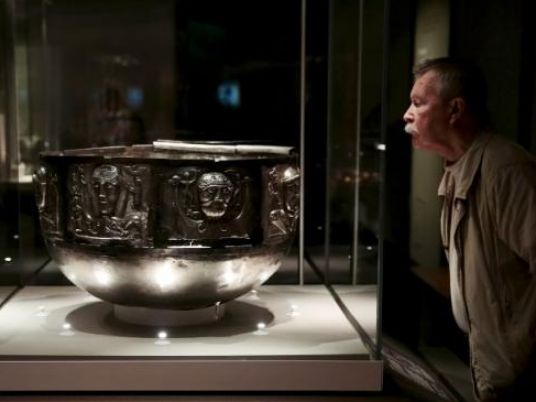 In a darkened gallery of the British Museum, where spotlights catch the intricate swirling decoration of Celtic Iron Age metalwork, visitors are confronted by a face from another world.
It belongs to a 2,500-year-old red sandstone warrior who marked a grave in present-dayGermany. His bulbous "ears" are in fact a "leaf-crown" headdress denoting high rank. His hollowed-out eyes mesmerize.
Too fragile to travel from the German museum of which he is the centerpiece, even in replica he is a presence from deep pre-history.
The warrior and his creator were Celts, although they would not have said so. Greek writers first used the term in about 500 BC to describe "barbarian" tribes in northern Europe.
The exhibition "Celts: art and identity" plots how the word Celtic has been used and co-opted to define identity over time.
The Celts were not one ethnic group and, while Celtic languages would have been spoken in much of the landmass, they had no common tongue, although their art demonstrates cultural connections across Europe from the Atlantic to the Black Sea.
"In a way, what brings them together is what they are not," lead curator Julia Farley said.
"These are people who are deciding that they want to have an abstract art style rather than following the trend towards increasing naturalism that we see in the classical world."
Instead of Greek and Roman art's realistic representations of people and animals, beasts and stylized human forms are "hidden" among the curved, interwoven lines traced over Celtic jewelry, weaponry and feasting utensils.
Many of the items in the exhibition, organized with National Museums Scotland, were unearthed from the graves and other buried hoards of the elite.
For centuries, the Celtic well-to-do wore torcs, or neck rings forged in gold, silver and other metals and the exhibition shows they evolved as art styles and ideas crossed the continent via trade links and even military conquest.
Fast forward to the present and Celts are confined to the Atlantic fringe of Britain, Ireland, northwest France and Galicia, Spain, where Celtic languages live on in varying degrees of health.
The 19th-century Celtic revival, which asserted identity in the face of Britain's industrialization, looked back to the past, prompting an upsurge of romantic literature and paintings of harp-wielding Welsh druids resisting the English oppressor.
"Claiming the name of being a Celtic nation and speaking Celtic languages is very much a statement of difference. It enables," Farley said.
Celtic art lives on and continues to define identity. The exhibition includes images of murals painted on the sides of houses during the unrest in the British province of NorthernIreland.
In one, the mythical Irish hero Cuchulainn is a symbol of Irish nationalist resistance to British rule, in another he is evoked by the pro-British "loyalists" opposing the nationalists.
For Farley the "showstopper" exhibit is the richly decorated silver Gundestrup cauldron, found in Denmark but probably made in the Balkans around 150-50 BC.
It is not Celtic art but it portrays people, gods and animals using and wearing the torcs, weapons and other objects that make up the exhibition.
"It is a reminder that these people did have this incredibly rich inner world of heroes and heroines, gods and goddesses. Even if we have lost the details and the names, objects like that remind you that it's there," Farley said.
The exhibition continues in London until Jan. 31 before transferring to the National Museum of Scotland in Edinburgh from March 10 to Sept. 25, 2016.