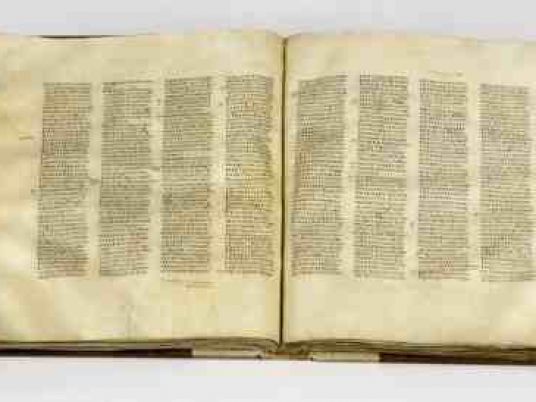 The world's oldest bible is among 200 objects tracing Egypt's religious evolution in an exhibition at London's British Museum, which opens Friday and spans the 1,200 years since Cleopatra's death.
Titled "Egypt: faith after the pharaohs", the exhibition covers 12 centuries, from the country's integration into the Roman Empire in 30 BC to the fall of the Islamic Fatimid dynasty in 1171.
One of the highlights is part of the 4th century Codex Sinaiticus, a book written in Greek on animal skin by monks on Mount Sinai, and which contains the oldest complete copy of the New Testament.
"It is without question the most important book in Britain. It is a remarkable chance to see it in the context of the world in which it was made," said British Museum director Neil MacGregor.
The exhibition shows how Christian, Jewish and Muslim communities reinterpreted Egypt's pharaonic past and shows that they were far from segregated, with one document outlining a lease agreement between two Christian nuns and a Jew.
The curators also highlight how monotheistic faiths developed — sometimes practices related to pagan worship and polytheistic beliefs, such as the casting of spells, were incorporated into the new faith.
"The idea that religion is something with clear boundaries distinguishing people from their neighbors is simply not what was happening there. It was a world where many people believed in many things," MacGregor said.
Door curtains from the 6th to 7th century featuring winged Victories holding a jeweled cross illustrate the fusion of classical and Christian motifs.
Other exhibits, trawled from the rubbish heaps of ancient and medieval towns, are less dramatic but also shed light on Egypt's religious past.
Letters from the Ben Ezra Synagogue in Cairo dating from between the 11th and 13th centuries, written in Hebrew, Judeo-Arabic, Aramaic and Arabic, are part of the exhibition, having originally been earmarked for disposal hundreds of years ago.
The texts suggest a thriving Jewish community with international links from Spain to India and give an insight into wider mediaeval Mediterranean society.