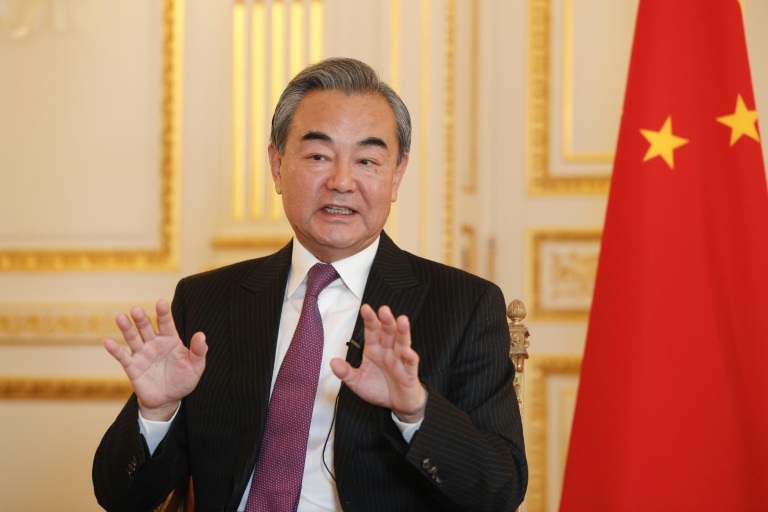 China’s foreign minister on Monday denounced months of pro-democracy unrest in Hong Kong as “violence pure and simple”, accusing foreign forces and the international media of fueling the political crisis.

The comments, in an exclusive interview with AFP, were the most direct condemnation from a top Chinese official of the protests that erupted five months ago and have seen millions of people take to the streets calling for greater democracy.

“What is happening in Hong Kong today are in no way peaceful protests,” Wang Yi said during the interview with AFP during a trip to Paris on Monday.

“It’s violence pure and simple. These are unacceptable acts in any country,” he added, accusing the protesters of attacking police, members of the public and paralyzing transport.

Hong Kong has been riven by seething protests for the past 20 weeks, with violence spiraling on both sides of the ideological divide.

While huge crowds have regularly marched peacefully, clashes have repeatedly broken out between smaller groups of hardcore protesters and riot police.

The hardline protesters have thrown molotov cocktails and bricks at police, as well as vandalized businesses perceived as being pro-China. Police have responded with rubber bullets and tear gas.

With no political solution in sight the clashes have intensified with each passing month.

China has run Hong Kong under a special “one country, two systems” model, which allows the city liberties not seen on the mainland, since the financial hub’s handover from the British in 1997.

But public anger has been building for years over fears that Beijing has begun eroding those freedoms, especially since President Xi Jinping came to power in 2012.

This summer’s protests were initially sparked by opposition to a now-scrapped proposal to allow extraditions of criminal suspects to mainland China.

They quickly snowballed into a wider anti-government movement after Beijing and local leaders in Hong Kong took a hard line.

China has regularly accused “external forces” of fueling unrest in Hong Kong, often citing comments by some western politicians supportive of the protests.

In his interview with AFP, Wang again alleged foreigners were involved.

“There are foreign forces which are encouraging this sort of violence in the streets with the aim of destabilizing Hong Kong, sowing chaos… to wipe out the historic progress made since the one-country-two-systems policy was applied,” said Wang.

“Such action will never succeed,” he added, insisting that the Hong Kong government would be able to re-establish “social order and respect for the rule of law”.

With “support from Beijing, Hong Kong will continue to apply the one-country-two-systems formula”, Wang stressed.

Wang also took aim at foreign media, complaining that some of them “call this violence democratic and peaceful, in total disregard to reality”.

These media outlets “do not hesitate to describe the actions of the police as violence. If such allegations can be perceived as reality, how can we imagine that there is still justice in this world?”

Chinese state media — which is controlled by the Communist Party — has churned out condemnations of the rallies, both domestically but also internationally through its global TV channels and official accounts on social media.

There have been concerns that China could send in troops to put an end to the unrest.

Last week Xi warned that any attempts to split China would result in “bodies smashed and bones ground to powder”, words that were seen a clear reference to the unrest in Hong Kong.

But Chinese officials have also repeatedly said it believes Hong Kong’s police force is capable of handling the protests.

Few analysts believe Xi would risk international condemnation by repeating its 1989 crackdown on pro-democracy demonstrators in Tiananmen Square, when it deployed tanks and troops to quash the uprising, leaving hundreds, perhaps more than 1,000, dead.