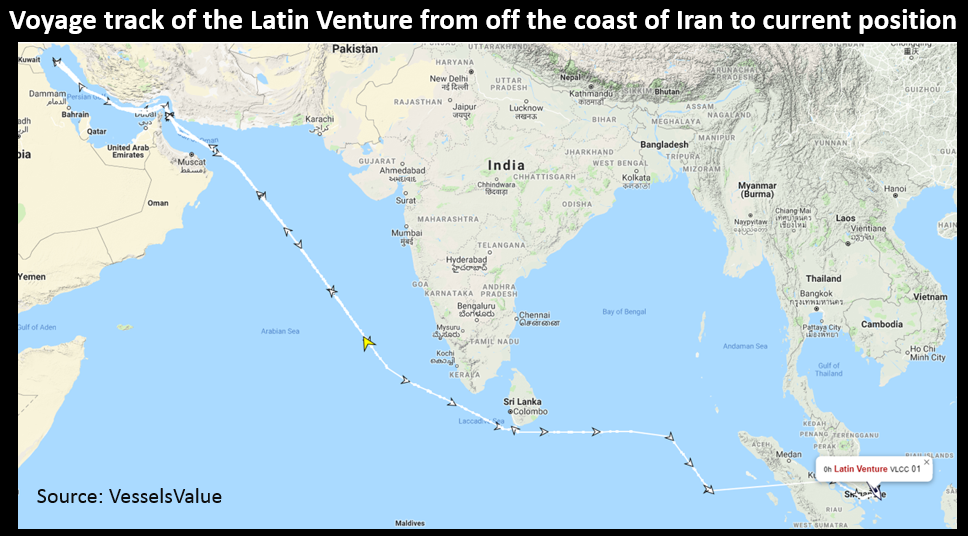 SINGAPORE/KUALA LUMPUR (Reuters) – While in the Indian Ocean heading toward the Strait of Malacca, the very large crude carrier (VLCC) Pacific Bravo went dark on June 5, shutting off the transponder that signals its position and direction to other ships, ship-tracking data showed.

A U.S. government official had warned ports in Asia not to allow the ship to dock, saying it was carrying Iranian crude in violation of U.S. economic sanctions. A VLCC typically transports about 2 million barrels of oil, worth about $120 million at current prices.

On July 18, the transponder of the VLCC Latin Venture was activated offshore Port Dickson, Malaysia, in the Strait of Malacca, about 1,500 km (940 miles) from where the Pacific Bravo had last been signaling its position.

But both the Latin Venture and the Pacific Bravo transmitted the same unique identification number, IMO9206035, issued by the International Maritime Organization (IMO), according to data from information provider Refinitiv and VesselsValue, a company that tracks ships and vessel transactions. Thomson Reuters has a minority stake in Refinitiv.

Since IMO numbers remain with a ship for life, this indicated the Latin Venture and the Pacific Bravo were the same vessel and suggested the owner was trying to evade Iranian oil sanctions.

“Without speculating on any particular shipowners’ actions, generally speaking for a ship to change its name abruptly after receiving accusations from the U.S., it can only be that the owner is hopeful that the market will be deceived by something as rudimentary as a name change,” said Matt Stanley, an oil broker at StarFuels in Dubai.

(GRAPHIC – The Latin Venture oil tanker shut off its transponder from early June to July 18: here) 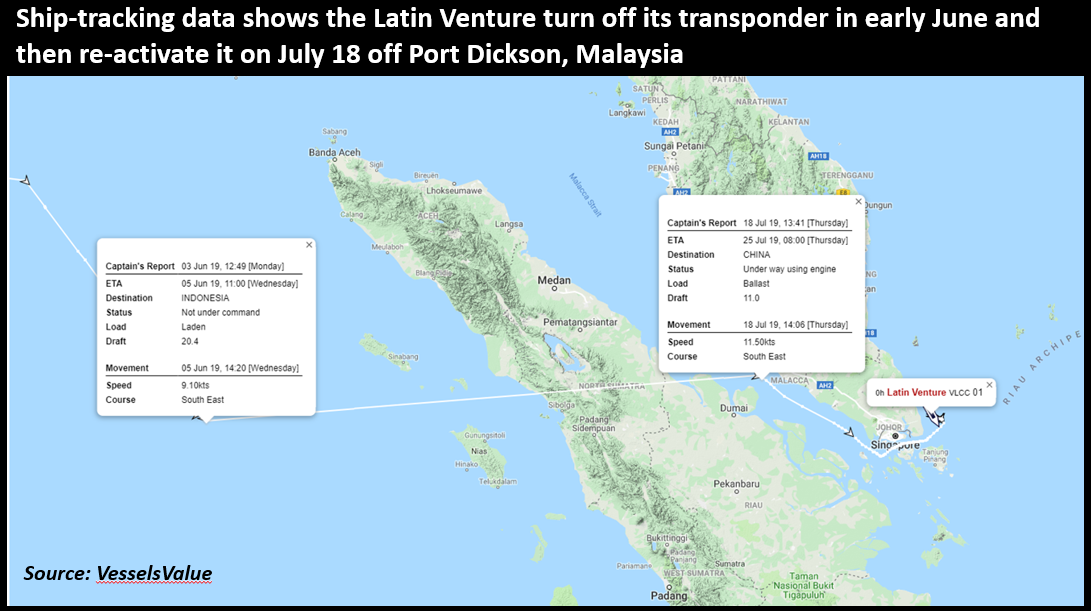 The vessel is owned by Kunlun Holdings, which, according to data from Equasis.org, a shipping transparency website set up by the European Commission and the French Maritime Administration, is based in Shanghai. The company also has an office in Singapore.

Calls to the company’s offices were unanswered. 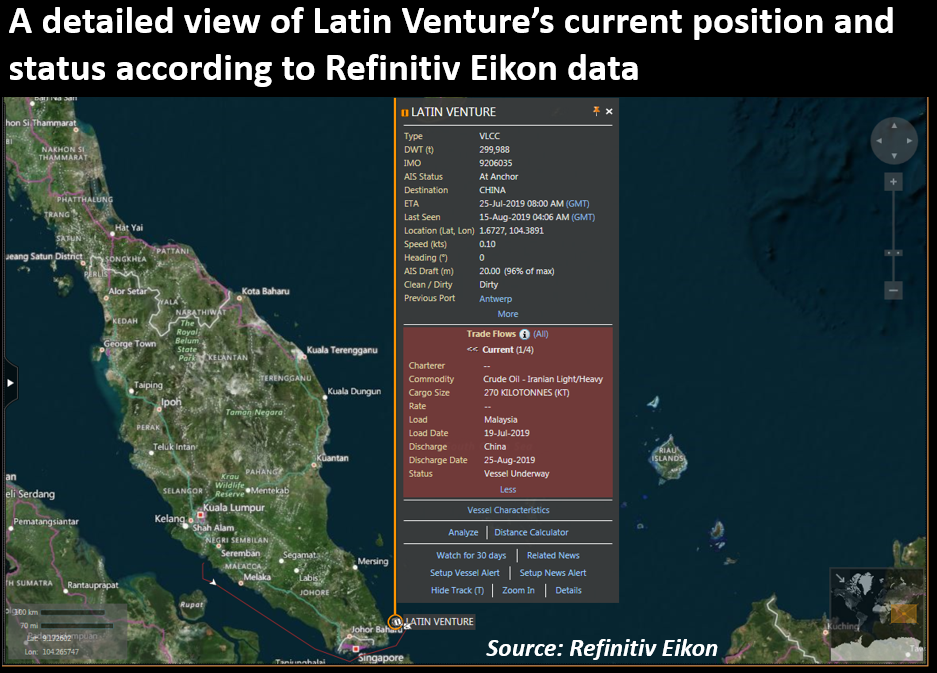 While operating as the Pacific Bravo, the ship’s transmission data showed that its cargo tanks were full before it turned off the transponder. When it reappeared 42 days later as the Latin Venture, it was empty, according to Refinitiv and VesselsValue data.

Reuters was not able to ascertain where or if the oil onboard the Latin Venture was offloaded.

According to a statement from the Marine Department Malaysia, the Latin Venture entered Port Dickson on June 29 for a crew change and departed on July 18. The statement said that no cargo was discharged.

The United States reimposed sanctions on Iran in November after pulling out of a 2015 accord involving Tehran and six world powers that limited Iran’s nuclear program. Aiming to cut Iran’s oil sales to zero, Washington in May ended sanction waivers given to some importers of Iranian oil.

While it was not aware of this particular situation, China has always opposed unilateral sanctions and “long-armed jurisdiction”, a Chinese Foreign Ministry spokesperson said in response to a Reuters request for comment.

“The global community, including China, is legally engaged in normal co-operation with Iran within the framework of international law, which deserves to be respected and protected,” the spokesperson said.

Responding to a Reuters request for comment on its reaction to the name change, a U.S. State Department spokesman said on Aug. 1: “We do not preview our sanctions activities, but we will continue to look for ways to impose costs on Iran in an effort to convince the Iranian regime that its campaign of destabilizing activities will entail significant costs.”

After departing Port Dickson, the tanker sailed past Singapore to the southeastern coast of Malaysia and on July 25 it transmitted that its cargo tanks were nearly full. As of Aug. 14, the ship remains there, ship-tracking data shows.

The origin of the oil cargo could not be determined.

(GRAPHIC – The track of the Latin Venture vessel from Iran to Malaysia: here)

Reporting by Roslan Khasawneh in SINGAPORE and A. Ananthalakshmi KUALA LUMPUR; additional reporting by Muyu Xu in BEIJING, SHANGHAI and BEIJING bureau, Jane Chung in SEOUL and Jonathan Saul in LONDON; editing by Christian Schmollinger