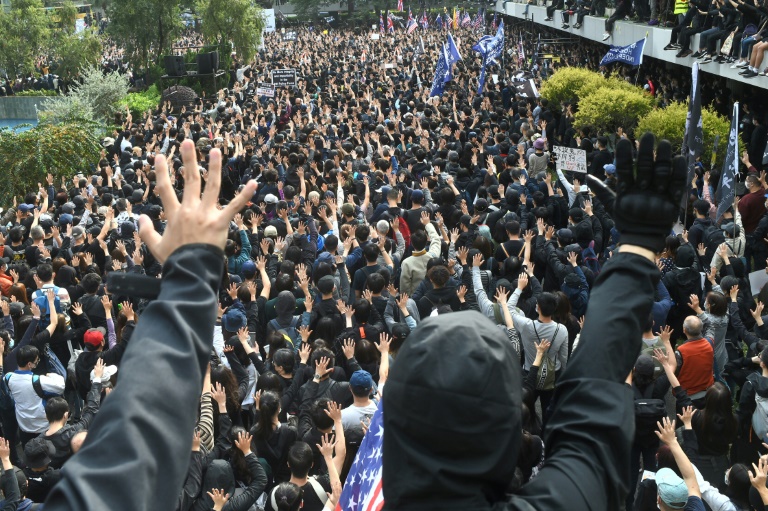 China warned Hong Kong protesters Wednesday it would not tolerate them “stirring up trouble again” in the semi-autonomous territory that was rocked by months of pro-democracy demonstrations last year.

Mass arrests of protesters and a ban on large gatherings due to the coronavirus outbreak in the financial hub have stifled the protest movement, but small demonstrations have been held in recent weeks as contagion fears ease.

“We noticed that the black violent forces slowed down a little when faced with the Hong Kong epidemic, but now they are stirring up trouble again,” China’s top body overseeing Hong Kong said in a statement, referring to the black clothing worn by many of the protesters.

“The central government will not sit idly by and watch these insane and wantonly destructive forces,” said the State Council’s Hong Kong and Macau Affairs Office, adding that protesters wanted to “drag Hong Kong off a cliff”.

The statement came after Hong Kong’s economy posted its worst-ever quarterly decline of 8.9 percent, pushing the territory deeper into recession.

Mass anti-government demonstrations began in June last year, triggered by opposition to a bill that would have allowed extraditions to mainland China where courts are controlled by the Communist Party.

But they have since grown to include demands for democracy and full accountability for police brutality.

Police have so far arrested 8,000 people and charged 1,365 over the protests, the latest official figures show.

Anger towards Beijing has been inflamed by the recent arrest of prominent activists on charges related to the demonstrations and senior Chinese officials announcing a greater say in how Hong Kong is run.