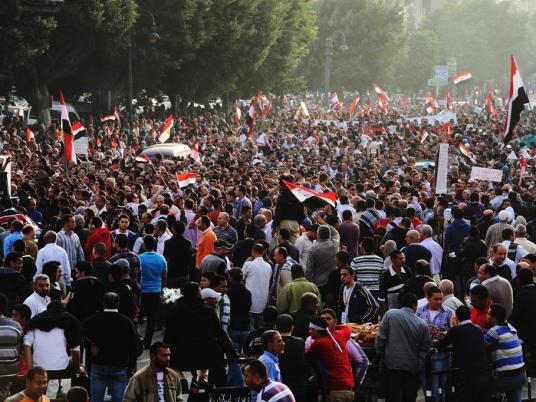 were overrun by violent clashes Friday, between protesters decrying President Mohamed Morsy, the Interior Ministry and the "Brotherhoodization of the state," and security forces and local residents.

Injuries in the coastal city were among the hundreds reported nationwide.

The day began with thousands marching from east Alexandria to downtown. The Muslim Brotherhood did not participate in the demonstrations, instead organizing charitable activities throughout the city. Calm prevailed in most neighborhoods.

In the morning, protesters blocked the corniche and the metro lines in front of Al-Qaed Ibrahim Mosque. The roads reopened again after they left.

After Friday prayers at the mosque, where controversial Sheikh Ahmed al-Mahalawy was absent this week, two more marches headed to the local council. Prominent political activists and several ultras youth participated, and were joined later by thousands more.

Some protesters headed to the court in the Manshiya district, chanting, "Go means leave, and don't say no," "The people want to bring down the regime," "The Interior Ministry remains the same: thugs, thugs," and "Down with the rule of the supreme guide."

In Manshiya, residents and shop owners clashed with protesters. Security officers closed the police station with iron chains and shot tear gas at the protesters, who retreated temporarily only to return in even larger numbers.

Security forces outside the criminal court fired gunshots into the air to disperse protesters who they said were attempting to storm the court.

Both groups threw rocks at each other, injuring many, until Central Security Forces separated the two sides. Protesters then joined their counterparts at the local council. Shop owners in the area closed their establishments.

The activists who had planned the council protest denied they had anything to do with the attempts to storm the court.

Masked youth dominated the scene both around the court and the council. It was unclear if they wore the masks to hide their identities or to avoid inhaling tear gas.

In the afternoon a massive march kicked off from Sharq al-Madina Mosque headed to downtown. They chanted slogans against the Muslim Brotherhood, the Interior Ministry and Morsy. They raised images of the martyrs of the revolution and demanded justice for their deaths.

The Black Bloc protesters besieged an apartment building in the Al-Qaed Ibrahim area where TV channel crews had set up their cameras. They demanded the Al-Jazeera Channel crew leave, accusing them of bias and distorting the truth. Residents in the building safely got the crew out of the building two hours later.

The Health Ministry reported several injuries from the clashes, ranging from respiratory damage due to tear gas, to cuts. They denied reports of injuries from birdshot or live ammunition. No deaths were reported.

The protests in front of the local council continued into late Friday evening, with the number of demonstrators steadily increasing.

He added that about 130,000 Alexandria residents would benefit from these campaigns.

"This is the difference between the Muslim Brotherhood's commemoration of the revolution, and other forces which claim to be civilian, but [commemorated] the revolution by burning and spreading violence and chaos," the statement said.

He accused the opposition of "political bankruptcy and attempting to stage a coup against legitimacy."