Alexandra Dive and Egyptian Tourism Authority celebrated World Tourism Day on Saturday with the Cleopatra Dream carnival, during which a performance team depicting Cleopatra’s Procession roamed the streets of Alexandria.

The performance is aimed to attract more tourists to the city and promote tourism in Alexandria, by showcasing the city’s civilization during the rule of Cleopatra and ancient Egypt in general. 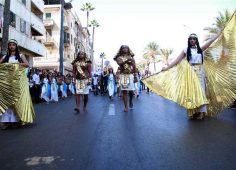 The Chairman of Alexandra Dive and organizer of the even, Ashraf Sabri, said that the idea for the celebration came in the context of World Tourism Day and the goal to promote Alexandria as a world tourism destination, but this time with the use of a historical figure linked to the city embodied through a carnival.

“The success of the Cleopatra Dream carnival, which is sponsored by the Egyptian Tourism Authority, is now driving me to make a new reason to organize a large carnival at the pyramids, where we may also use historical figures,” Sabri said. 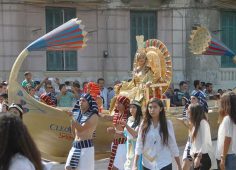 Director of the celebration, Fadi Nour, said that the budget allocated for this event amounted to LE1.2 million, only LE200,000. of which the Ministry of Tourism paid.

In statements to Al-Masry Al-Youm, Nour said that the Pharaonic costumes used in the show consumed a large part of the budget.

The director said that over 50 young actors and actresses participated in the show voluntarily without being paid, and received training for 17 sessions for the performance. 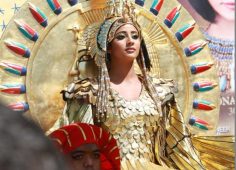 Nour added that Ministries of Antiquities and Tourism hindered an important section of the performance. The organizers had asked the ministry for cameras to do do an underwater scene shoot, but antiquities and tourism requested LE30,000 per camera for the priviledge .

The cut underwater portion of the show would have depicted Cleopatra juming into the water to dive to her underwater palace.