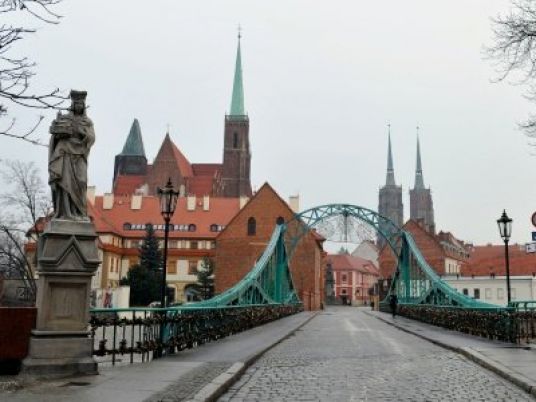 Long a symbol of Polish-German reconciliation, Poland's western city of Wroclaw will become a European culture capital this year highlighting its history at the crossroads of political upheaval in central Europe.
Formerly known as Breslau and part of Germany before the end of World War II, Wroclaw will share the limelight with fellow capital of culture San Sebastian on Spain's northern Basque coast.
Poland's fourth largest city with a population of 630,000, Wroclaw is an industrial center and university town whose complex identity spans a millennium and includes a myriad of influences.
The central European melting pot was over the centuries part of the Kingdom of Poland, Bohemia, Hungary, the Austrian Empire, Prussia and Germany.
The city's honor comes at a time when relations between Poland and Germany — both EU and NATO members — are strained over controversial legislation enacted by the new conservative government in Warsaw giving it control over the country's top court and public broadcasters.
The right-wing Law and Justice (PiS) party, which returned to power after eight years in October, has brought back anti-German rhetoric and euroscepticism.
Poland's justice minister referenced the 1939-45 war in response to a letter from German politician and EU Commissioner Guenther Oettinger, while a Polish pro-government magazine depicted EU leaders including German Chancellor Angela Merkel in Nazi uniforms.
The harsh Polish comments came after the new laws were notably criticized by the German head of the European Parliament, Martin Schulz, as constituting a "coup" and "Putinization of European politics".
But in Wroclaw there is no ill will, according to sculptor and longtime resident Amanda Rozanska: "We don't have a problem with Germans."
"We rather like them, ever since they've accepted that what happened is their fault," she told AFP, referring to Nazi Germany's occupation of Poland.
Historical kick-off
The culture capital festivities kick off this weekend, with dancers and musicians taking to the streets to offer a polyphonic account of the city's history, directed by Chris Baldwin, who had collaborated on the London Olympics celebrations.
"I believe this may be the most important year in the post-war history of Wroclaw," says Mayor Rafal Dutkiewicz on the city's website about the host of cultural events planned over the next 12 months.
"We want Wroclaw to be a very open metropolis on the map of Europe and the world."
One way to look at the city's history is the daily life in pre-war Breslau — its streets, restaurants, brothels — depicted in detail by local writer Marek Krajewski in his detective novel series featuring policeman Eberhard Mock, which has been translated into 18 languages including German.
Soviet bombing flattened 70 percent of the city in 1945 and most of the German residents left after the war ended.
Wroclaw was mainly repopulated by Poles from the city of Lwow — which became Ukraine's Lviv after the war — and also drew Jews and Greek immigrants.
The city's Jewish community is now one of the country's most dynamic, though incidents of anti-Semitism occur.
In November last year prosecutors opened a probe into an anti-migrant demonstration where protestors burnt a mannequin depicting a Jew.
Orange dwarves
In the 1980s, Wroclaw was the birthplace of a particularly radical wing of the Solidarity trade union that negotiated a peaceful end to communism in Poland in 1989.
The city was also home to the offbeat protest group Alternative Orange and its surreal antics which emerged after the regime imposed martial law in 1981.
The group's militants would dress up as dwarves and stage street demonstrations, shouting outlandish demands that baffled security forces.
To cries of "Freedom for Snow White!" and "Dwarves of the world unite!", they would distribute rolls of toilet paper — a luxury item at the time — to bewildered locals.
Though offbeat, its methods were credited with helping to break down the rigid censorship and police surveillance in force at the time and pave the way towards democracy.
Then came the "Flood of the Century" in July 1997, an event that truly cemented the identity of Wroclaw residents.
"Even hooligans came out to carry sandbags to block the water," said Grzegorz Roman, an advisor at the mayor's office.
"That marked the end of the process of assimilation in the city," he told AFP, adding there is now "a total acceptance of the German past".
In 2008, Wroclaw unveiled the Monument of Common Memory — a granite wall made of tombstones from German cemeteries razed under communism — where descendents of the city's former German residents can gather on visits to Wroclaw.