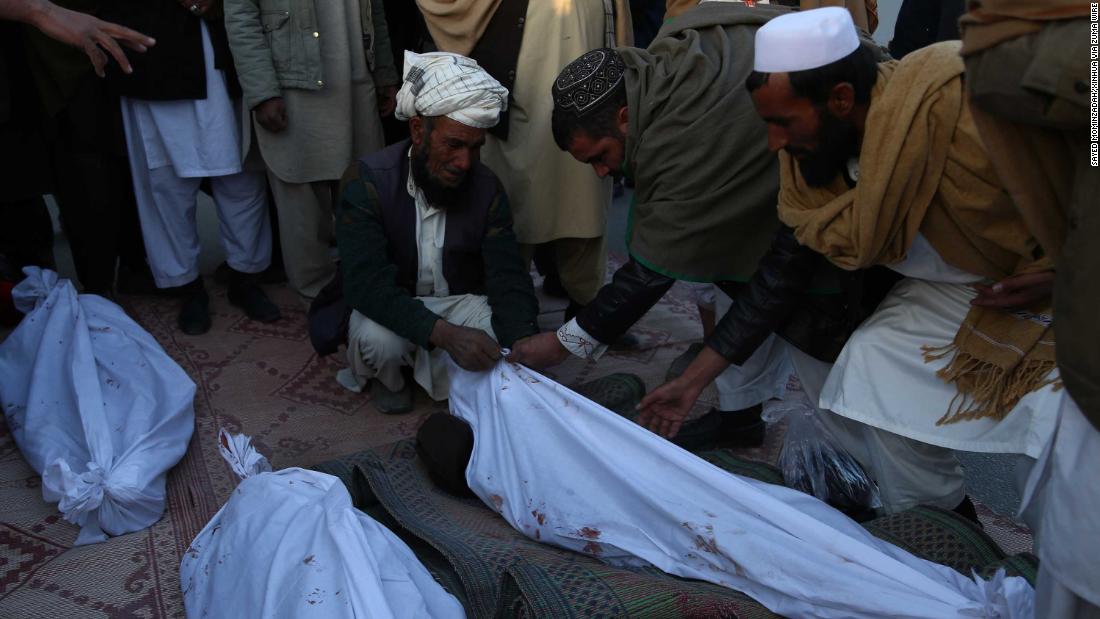 (CNN) – The number of civilians — mostly women and children — killed or injured by airstrikes in Afghanistan has risen a startling 39% year on year, according to UN figures released Wednesday, casting fresh scrutiny on the use of air power by the United States and its Afghan partners at a time of near-record bombing and increasing violence.

More civilians have been killed or injured in airstrikes so far this year than all of last, according to a United Nations quarterly assessment of civilian casualties. The rise comes after the departed US commander for the war promised a “tidal wave of air power” to combat a resurgent Taliban. US President Donald Trump has personally delineated a strategy for victory in Afghanistan, and vowed to “push onward to victory with power in our hearts.”

The UN report comes as the US ratchets up its involvement in what has become the country’s longest-running war. The US has boosted its support for the Afghan Air Force through training and weapons supply, raising concern over the air force’s use of US-supplied non-guided bombs that have taken a clear toll on civilian lives.

The UN report shows airstrikes, carried out by both US and Afghan aircraft, have killed or injured 649 civilians so far this year, 39% higher than the same first nine months in 2017, and more than the 631 killed or injured by airstrikes in all of last year. Sixty percent of this year’s casualties have been women and children, according to the report.

The report also says that total civilian deaths across Afghanistan — due to various violent attacks — stands at 2,798 for the first nine months of this year, slightly up on the same period in 2017.

US and Afghan aircraft are almost equally responsibility for the casualties, according to the report. US figures show its aircraft released a near-record number of bombs in July. They carried out the most airstrikes in one month since 2010, when the US had about eight times as many troops in the country, requiring constant air support at the height of the Obama administration’s surge there.

According to the UN report, anti-government elements are still responsible for the vast majority of civilian deaths and injuries, accounting for 65% of casualties overall so far this year.

The huge increase in bombing, however, relative to the 14,000 US troops now in country, will spark questions as to whether US forces have been given looser rules of engagement, in a conflict that has now run for 17 years.

In a wide-ranging speech on Afghanistan in August of last year, Trump said he had loosened “restrictions the previous administration placed on our warfighters,” yet the exact nature of the new rules hasn’t been made public.

In response to the report, US Forces Afghanistan spokesman Cmdr. Grant Neeley reiterated that anti-government elements were the main cause of civilian casualties.

“Indiscriminate targeting of innocent civilians through improvised explosive devices and deliberate suicide attacks has increased in both frequency and lethality. These actions expose the hypocrisy of Taliban who espouse a high regard for this country and its people while creating an environment of death and insecurity.”

While the varied use of US air power has at times put civilian life in greater danger, the scale and manner of the airstrikes undertaken by the Afghan Air Force is both relatively new and startling.

Figures given to CNN by the Afghan Ministry of Defense show more than 800 airstrikes since the end of June were carried out by the Afghan Air Force, a body of light aircraft and pilots trained and equipped over the past two years by the US. The Pentagon has asked Congress for $1.8 billion to train and equip the AAF in 2019.

The figures show thousands of insurgent deaths reported in under four months. Such official Afghan figures are often considered inflated by some experts, and the Afghan Ministry of Defense does not appear to publicly tally civilian casualties.

The airstrikes recorded include the use of machine gun fire and bombs by the Afghan Air Force’s planes and helicopters, which mostly deploy less accurate, non-guided munitions that are more likely to cause unintended civilian deaths.

Mohammad Radmanish, an Afghan Defense Mignistry spokesman, told CNN that the air force “rarely uses” guided bombs in their airstrikes, listing only four provinces in which they had been used, and saying they had no record of the total number deployed.

“Whenever there are civilian’s casualties, it happens from insurgents’ side. Either they plant bombs or they use civilians [as human shields] in their fight,” he told CNN.

In just the last month, the Afghan Air Force carried out 237 airstrikes, according to the defense ministry, which says it killed more than 1,300 insurgents in the strikes.

But the constant toll on civilians by this peak in air power is growing, and has been palpable in the past weeks.

On September 23, 10 civilians, including women and children, were killed when an Afghan airstrike hit a residential house in Jaghato district, in the province of Maidan Wardak, according to Akhtar Mohammad Taheri, head of the provincial council. Another 67 insurgents were killed in the strike.

On October 4, according to a statement from the Kandahar government, three women and a child were killed in an apparent Afghan airstrike when insurgents hid in civilian houses in the district of Maroof, after attacking army checkpoints in the villages of Khogyani and Ishaqzai. Eight other civilians were injured, and eight insurgents killed, the statement said.

Three women were killed by a US airstrike in Chardara district of Kunduz on September 25, according to Esmatullah Moradi, Kunduz’s provincial spokesman, during an operation against the Taliban. The husband and father-in-law of two of the three deceased, in emotional footage obtained by CNN of the victims’ bodies stacked in a truck, said: “I collected her body parts in a sack, we lost everything. My wife, my daughter in law were killed, and my son is in the hospital.”

A spokesman for US forces in Afghanistan disputed any US role in the above cases, and said they had even reopened their investigation into an earlier incident in Kunduz on July 19 this year, after receiving new information, so thorough were their procedures.

“We are keenly aware of the continued practice by insurgents to use close proximity of civilians, often by force, to prevent air strikes and counterattacks on their positions,” said Col. David Butler, US Forces Afghanistan spokesman. “When these situation are identified in time, our forces respond appropriately by choosing not to attack to protect innocent lives,” Butler added.

“We’re the most precise military in world existence. We train the Afghans to operate by the same standard. Though still in its infancy, the Afghan Air Force continues to grow in size and capability.”

This story has been updated to reflect that the 39% increase relates to civilians killed or injured by airstrikes.