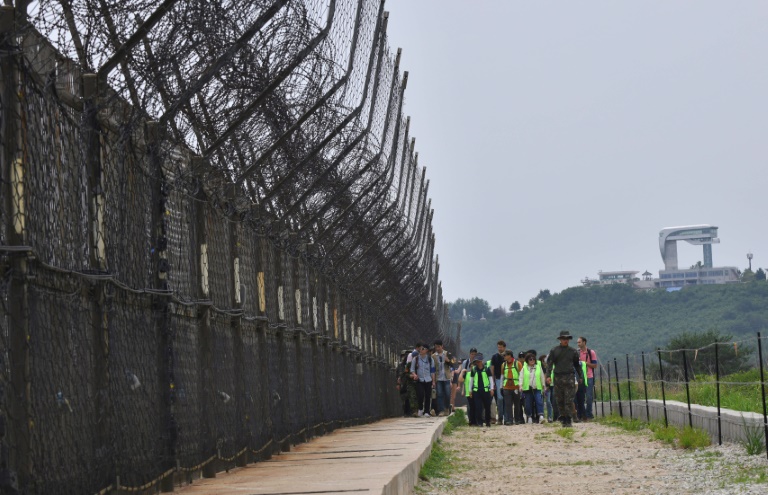 Donald Trump and Kim Jong Un shook hands at the Demilitarized Zone on Sunday, with the US leader becoming the first sitting president to enter the North when he stepped over the thin concrete line that divides the Korean peninsula.

Trump’s visit to the DMZ came just a day after he extended a Twitter invite to Kim to come and meet him at a place widely referred to as the world’s last Cold War frontier.

Here are some questions and answers about the Demilitarized Zone, which is based on the positions held at the end of the 1950-53 Korean War, where South Korean forces backed by a US-led UN coalition fought to a standstill with North Korean and Chinese troops.

The four-kilometer-wide DMZ runs for 250 kilometers (160 miles) across the Korean peninsula, around 50 kilometers north of Seoul and 200 kilometers south of Pyongyang.

At its center is the Military Demarcation Line (MDL), where the front line lay when the ceasefire stopping Korean War hostilities was signed in 1953.

Under the agreement both sides agreed to pull back their forces 2,000 meters. To the south, Seoul has established a further buffer zone of varying width where civilian access is restricted.

A barrier separating North and South, heavy weaponry is banned within the DMZ. Patrols are allowed but cannot cross the MDL and no more than 1,000 people from each side are permitted inside the zone at any one time. It is also littered with minefields.

The areas immediately outside it are some of the most highly fortified places on earth, bristling with artillery, military camps, and more minefields.

With the DMZ a “no man’s land” that has seen minimal human presence for more than half a century, much of the zone itself is lush forest, renowned as an ecological refuge for rare species of flora and fauna whose habitat elsewhere has been destroyed by development.

An Asiatic black bear was photographed there last October, according to Seoul’s environmental ministry.

Within the zone, watchtowers poke up from hilltops, and barbed-wire fences line its edges.

Who has been there?

The US and South Korea have been in a security alliance for decades and a trip to the DMZ is something of a ritual for visiting US leaders.

Then president George W. Bush went in February 2002, a month after he named North Korea as part of his “axis of evil”.

The last to go was Barack Obama in 2012, and US Vice President Mike Pence went to the border in April 2017 amid heightened tensions with the reclusive state.

President Donald Trump tried to visit seven months later but his helicopter was forced to turn back due to heavy fog.

Also known as the Joint Security Area (JSA), Panmunjom is a series of buildings centered on several blue UN meeting huts right on the MDL, which have become emblematic of the division of the peninsula.

The 1953 armistice was signed in a building on the northern side, and the JSA was the site of the 1976 “Axe Murder Incident”, when two US military officials seeking to cut down a tree that obscured visibility were hacked to death by North Korean soldiers.

It is the only place in the DMZ where soldiers from South and North Korea stand face to face, although under the terms of an inter-Korean agreement Moon and Kim signed at their third summit last year in Pyongyang, they no longer carry arms.