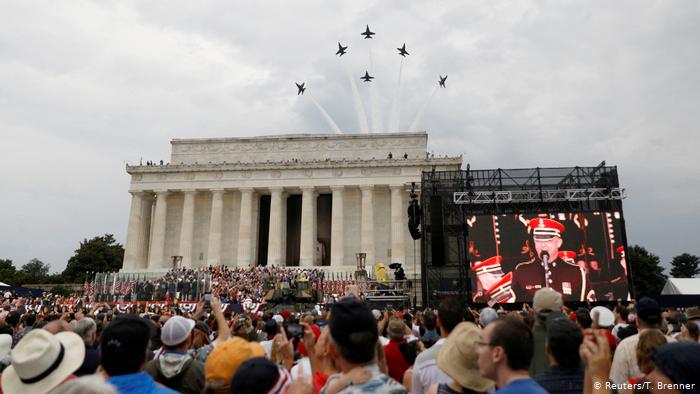 The US marked its independence day on Thursday, with President Donald Trump staging a large event dubbed “Salute to America” in Washington, DC.

Trump is the first president in nearly seven decades to address a crowd on Independence Day at the National Mall, a large open park that spans from the iconic Lincoln Memorial monument to the US Capitol.

President Harry Truman, in 1951, was the last president to hold such an event. He spoke before a large gathering to mark the 175th anniversary of the signing of the Declaration of Independence.

The 2019 celebration has been fraught with controversy. Trump has long expressed deep interest in staging a military parade in Washington, DC, but the idea had been widely criticized and estimated to be very costly.

Nonetheless, the US president succeeded in getting tanks and armored vehicles to be on display for his Fourth of July celebration. The US National Park Service diverted $2.5 million (€2.2 million) in park entrance fees to finance the event.

“Salute to America” was open to the public and drew many fans of the president. Top Republican donors and allies, as well as top military brass, were all in attendance.

In his speech, Trump called on Americans to “stay true to our cause.”

“We celebrate our history, our people, and the heroes who proudly defend our flag: the brave men and women of the United States Military,” Trump said.

The commemoration focused mainly on the US military, with Trump highlighting the most important US military achievements through the country’s history.  But the speech also mentioned important figures such as Martin Luther King Jr. and social movements in the US such as Civil Rights and Women’s Suffrage.

“Today, just as it did 243 years ago, the future of American freedom rests on the shoulders of men and women willing to defend it,” Trump said.

According to broadcaster CNN, approximately 750 to 800 military personnel took part in the “Salute to America” celebration.

A series of flyovers took place during the speech. The president paused each time a new set of aircraft would fly overhead so that onlookers could observe.

Critics accused Trump of politicizing the Fourth of July, a traditionally nonpartisan holiday. Protesters gathered under the Washington Monument, the large obelisk that sits in the middle of the National Mall, with posters and a 20-foot tall “Trump baby” balloon.

“We think that he is making this about himself and it’s really a campaign rally,” said Medea Benjamin, co-director of the anti-war organization Codepink.

“I wonder what Donald Trump will say this evening when he speaks to the nation at an event designed more to stroke his ego than celebrate American ideals,” Biden said prior to the president’s speech.

“This is what authoritarians do: @realDonaldTrump is taking $2.5 million away from our National Park Service to glorify himself with a spectacle of military tanks rolling through Washington,” he wrote.

Biden's support from black voters cut in half after debate: Reuters/Ipsos poll