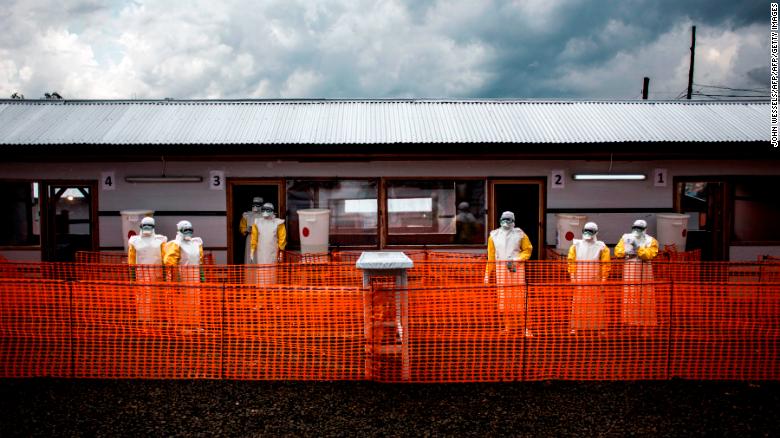 (CNN)–The Ebola outbreak in the Democratic Republic of Congo has reached a grim milestone, with 27 new cases confirmed in a single day — a record for the current outbreak.

The outbreak, which is the second deadliest in history, has proved difficult to bring under control because of community mistrust and violent attacks on health care workers.

“The increase in the number of new [Ebola] cases in the Democratic Republic of the Congo remains deeply concerning,” WHO said in its latest situation report.

According to the latest figures from the Congo health ministry, the total number of confirmed cases is 1,429 and 66 probable ones. In total, 984 people have died since the outbreak began, while 415 people have been cured.

WHO said that sporadic violence by armed militias, limited health care resources and difficult-to-access locations meant this “outbreak is taking place in one of the most challenging circumstances ever confronted by WHO.”

Last month, WHO epidemiologist Dr. Richard Mouzoko was killed by armed men while he and colleagues were working in Butembo, in North Kivu, a province grappling with a long-term conflict and dozens of armed groups causing intermittent violence.

“Dr. Mouzoko’s death moved me profoundly,” WHO Director-General Dr. Tedros Adhanom Ghebreyesus said in a statement this week after a visit to Butembo.

“I am also profoundly worried about the situation. Cases are increasing because of violent acts that set us back each time.”

The attack took place during a coordination meeting being held at the hospital Mouzoko was working at.

Doctors Without Borders (Medecins Sans Frontieres) staff have also been attacked, prompting the medical group to suspend work in some Ebola-hit areas.

In addition to the violence, the medical response has been hampered by widespread mistrust and misinformation.

A study in the Lancet medical journal published in March found that 25% of the 961 people surveyed in one of the Ebola-affected provinces believed “that the Ebola outbreak was not real.”

Many deaths are taking place in the community before medical workers have reached them. Of the 27 new cases reported Sunday, 13 were dead, according to the Congo health ministry.

Unlike the 2014 outbreak in West Africa that killed more than 11,000 people, there are now vaccines and experimental treatments to treat and prevent the spread of the disease.

Dr. Joanne Liu, international president of Doctors Without Borders, said in March that the response to Ebola had to be more community-based, treating patients as humans, “not as a biothreat.”

“People prefer to stay in the community, not go to treatment centers,” she said.

Unlike the 2014 outbreak that straddled a number of West African countries, WHO said last month that the outbreak did not constitute a “public health emergency of international concern.”

The Congo outbreak has affected North Kivu and neighboring Ituri province. The two provinces are among the most populous in the country and border Uganda, Rwanda and South Sudan.

“Whatever the official status of this outbreak is, it is clear that the outbreak is not under control and therefore we need a better collective effort. The virus has not spread to neighboring countries so far, but the possibility exists,” Gwenola Seroux, emergency manager at Doctors Without Borders, said after the decision.