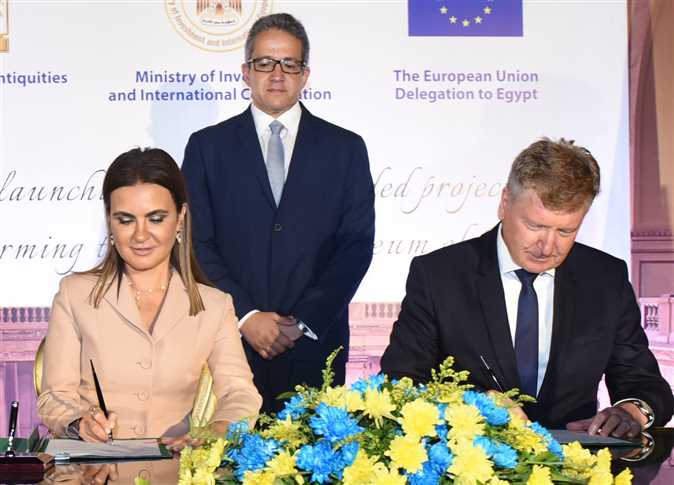 The Egyptian government announced on Monday the start of a project to develop the Egyptian Museum in Tahrir at a cost of 3.1 million euros.

The announcement came during a joint press conference at the Egyptian Museum in the presence of the Minister of Investment and International Cooperation Sahar Nasr, Minister of Antiquities Khaled al-Anany, and the Ambassador of the European Union to Cairo Ivan Surkos.

During the conference, Nasr signed with Surkos the project implementation agreement for an EU grant of 3.1 million euros under the overall economic growth program of 15 million euros.

The grant will be implemented in cooperation with European experts in museums and museum exhibition curation in order to enhance the Egyptian Museum and improve its efficiency and improve the experience of Egyptian and foreign visitors and to enhance the museum’s economic impact and place it on the UNESCO World Heritage List.

The project will be implemented over the next three years. A consortium of five European museums as well as the French Institute for Oriental Archaeology (IFAO) and the Central Institute of Antiquities will develop a strategic vision for the project within international standards.

Each museum will provide its expertise and scientific and international skills to present the best methods of museum science and ensure the implementation of the project with the latest scientific methods. A file for the Egyptian Museum in Tahrir will be prepared for submission to UNESCO for inclusion in the list of world heritage sites.

The Minister of Antiquities thanked the Minister of Investment and International Cooperation and the Ambassador of the European Union to Egypt as well as the ambassadors of 40 countries from all continents of the world and the representatives of UNESCO.

Surkos noted the importance of this project as it represents excellent cooperation and coordination between the EU and Egypt in the framework of the efforts of the two sides to protect and promote common cultural heritage.

He stressed that European expertise will work to raise the level of the Egyptian Museum to the highest international standards of museum science.