American financial aid to Egypt is not “eternal” and “distorts the nature of bilateral relations” between the two countries, Egypt's foreign minister said Wednesday.

“The relations should work in favor of Washington and Cairo, and not in favor of one direction; therefore, we have to build relations anew between the two sides,” Minister Mohamed Kamel Amr told a seminar titled “Egypt's Foreign Policy after the 25 January Revolution” at the American University in Cairo.

Washington should be aware that it is in the US's best interest as a major power to maintain smooth relations with Cairo, Amr said, adding that US aid to Egypt is only “interim.”

Amr said Egypt should develop a plan to cancel the aid it receives from the US, but according to an exact mechanism that would positively establish Egypt's future relationship with the US.

Amr also addressed the contentious issue of the Egyptian government's trial of NGOs accused of illegally accepting foreign funds, which has put a serious strain on the Egypt-US relationship.

“After the 25 January revolution, these organizations started to illegally intensify their activities inside the country.” he said. “And when [a government-appointed] fact-finding committee became suspicious of their work, it referred the issue to the judiciary.”

“As long as the issue has been referred to the judiciary, the [Foreign] Ministry has nothing to do with it,” Amr noted.

Amr maintained that despite the charges against the organizations in question, NGOs are an essential part of any democratic community and government decision-making process.

The assumptions that Egypt-US relations depend on maintaining the Camp David Accords and Israel's national security are outdated, Amr said. He stressed that because Egypt is on its way to regaining its prominent position in the region, relations with the US should be built anew according to principles of the 25 January revolution.

Amr also said that Egypt's national security will not be affected by the recent rise of Islamists in the government.

US President Biden will detail a proposal soon to further pressure Russian oligarchs. More than 20,000 Ukrainians have been processed at the US-Mexico border since mid-March 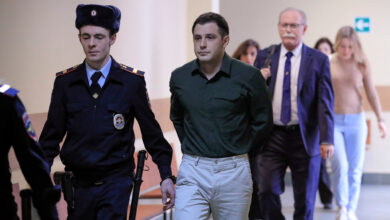 Trevor Reed’s release a result of “months and months” of work, US official says