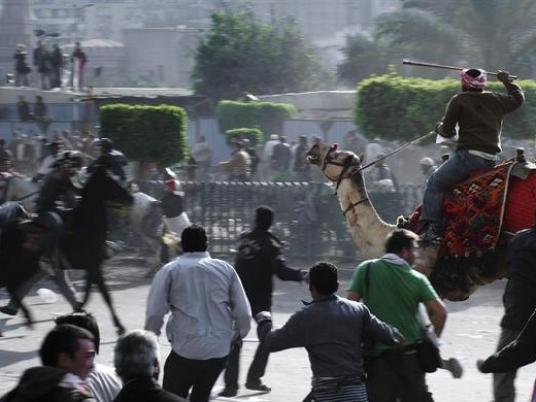 Rights activists maintained almost identical views when asked by Al-Masry Al-Youm: What is the situation of human rights and freedoms in Egypt six years after the January 25 Revolution, a period which also witnessed the 30 June uprising?

Activists who spoke to Al-Masry Al-Youm said Egypt is in a crisis amid a crackdown on freedoms and human rights, as successive governments since 2011 have not adhered to the Constitution.

They warned of the danger of this political scene and the consequences stemming from it, stressing that the Parliament is making the situation more dangerous by approving a number of laws that are inconsistent with the provisions of the Constitution.

And what increases the complexity of the scene, is the regime itself carrying out procedures that limit constitutionally guaranteed freedoms, including the expansion of detention in remand, and travel bans on its critics, which brings to mind the situation of freedom under the rule of former president Gamal Abdel Nasser in the 1960s.

Chairperson of the United Group law firm Negad al-Borai said that with the elections of former Muslim Brotherhood President Mohamed Morsi and after him President Abdel Fattah al-Sisi, "we live the atmosphere of the sixties."

"[Personal] freedoms are just of branch of human rights and the expansion of detention in remand, banning people from travel, putting others on the terrorism list, suppressing the freedom to protest, and punishing all oppositionists for their attitudes and opinions is a reflection of the real situation of freedoms in Egypt now," Borai said.

We see activists and oppositionists reside abroad fearing the brutality of the regime, which is something that hasn't happened for 40 years, Borai added.

Borai said the only solution to this crisis is for the government to adhere to the Constitution.

The chairperson of the Egyptian Organization for Human Rights, Hafez Abu Seada, said human rights and freedoms have seen significant declines especially in freedom of thought and expression.

He explained that the past period saw many TV programs taken off air, including Reem Maged, Yousry Fouda, Mahmoud Saad, and many others, the most recent of which is Ibrahim Eissa. Seada said the owners of these channels are under pressure to suspend those shows.

He said one of the implications of declining freedoms is the wiretapping of some political figures and then deliberately broadcasting the recordings, which poses a threat to people's privacy.

"The situation is worse in the field of economic and social rights in light of the application of economic policies that threaten the middle class because of the rising prices of basic commodities," Seada added.

The government justifies the decline in civil and political rights with the pretext of maintaining economic and social rights, but unfortunately no progress is being made in either of those, Seada said.

Chairperson of the Centre for Trade Union and Workers' Services (CTUWS) Kamal Abbas said that the government is doing exactly the opposite of the demands from the January 25 Revolution — which was the main reason for the revolution.

He added that the situation of freedoms is going from bad to worse; the Parliament passes "hostile laws and its members are more hostile [to the people] than government officials."

Abbas said Parliament approves laws that are inconsistent with the Constitution, rather than adhering to it. "This is one of the worst parliaments ever," he added.

Alaa Shalaby, secretary general of the Arab Organization for Human Rights, said the decline in the level of freedoms is evident in the issuance of the law regulating NGOs, which contains unacceptable provisions that restrict the organisations' public work.

He added: "there is another problematic issue represented in the continuation of civilians being tried before military courts. Though the Constitution limits this, what is required is for these trials [for civilians] to be abandoned altogether."

The government has recently pledged to amend the Protest Law after direct instructions from the president, and Shalaby said, "we hope to have the amendment according to the observations of the political forces."