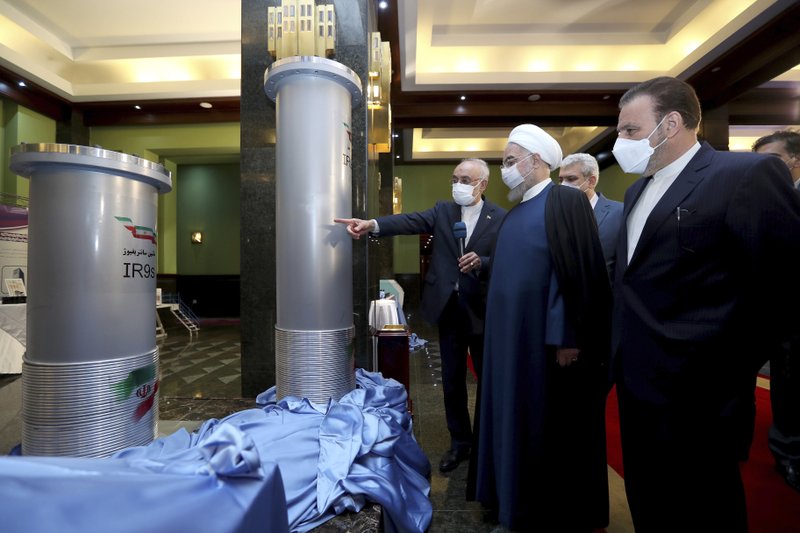 DUBAI, United Arab Emirates (AP) — Iran’s nuclear program has been targeted by diplomatic efforts and sabotage attacks over the last decade, with the latest incident striking its underground Natanz facility.

The attack Sunday at Natanz comes as world powers try to negotiate a return by Iran and the US to Tehran’s atomic accord. The sabotage threatens to upend those negotiations and further heighten regional tensions across the Mideast.

FROM ‘ATOMS FOR PEACE’ TO PROLIFERATION

Iran’s nuclear program actually began with the help of the United States. Under its “Atoms for Peace” program, America supplied a test reactor that came online in Tehran in 1967 under the rule of Shah Mohammad Reza Pahlavi. That help ended once Iran’s 1979 Islamic Revolution overthrew the shah.

Tehran insists its atomic program is peaceful. However, Iran “carried out activities relevant to the development of a nuclear explosive device” in a “structured program” through the end of 2003, the International Atomic Energy Agency has said. That’s an assessment shared by US sintelligence agencies and the State Department. Israeli Prime Minister Benjamin Netanyahu long has alleged Iran continues to want nuclear weapons to this day.

Iran struck the nuclear deal in 2015 with the United States, France, Germany, the United Kingdom, Russia and China. The deal, formally known as the Joint Comprehensive Plan of Action, saw Iran dramatically limit its enrichment of uranium under the watch of IAEA inspectors in exchange for the lifting of economic sanctions. The small stockpile of less-enriched uranium blocked Iran from having enough material to build a nuclear bomb if it chose.

Then-President Donald Trump unilaterally withdrew America from the accord in 2018, in part over the deal not addressing Iran’s ballistic missile program and its support of allied militant groups in the Mideast. Architects of the deal, containing provisions that expire over time, had said they hoped American officials could build on it for future agreements.

Since the US withdrawal, Iran has in response abandoned all the deal’s limits of its uranium enrichment. It spins advanced centrifuges, grows its stockpile and enriches up to 20 percent purity — a technical step away from weapons-grade levels of 90 percent.

President Joe Biden, who took office in January, has said he’s willing to re-enter the nuclear deal. Countries began negotiations in Vienna last week seeking to find a way forward. Israel, which under Netanyahu has vowed not to see the deal revived, is widely suspected of recently stepping up a shadow campaign targeting Iran.

With the sabotage of Natanz on Sunday, the head of Iran’s civilian nuclear program described it as “nuclear terrorism.” But it marked merely the latest attack targeting the Iranian program.

Natanz found itself first targeted by a major cyberattack in the late 2000s. Called Stuxnet, the virus attacked control units for centrifuges at Natanz, causing the sensitive devices to spin out of control and destroy themselves. Experts widely attribute the attack to America and Israel, as does Iran.

Another sabotage attack targeted Natanz in July. An explosion ripped apart an advanced centrifuge assembly plant at the site. Afterward, Iran said it would rebuild the site deep inside a nearby mountain. Satellite photos show that work continues. Suspicion widely fell on Israel for the blast as well.

Then there have been a series of assassinations targeting Iranian nuclear scientists over the last decade. The killings involved bombings and shootings. The most-recent killing saw the scientist who founded Iran’s military nuclear program decades ago shot in November by what authorities have described as a remote-controlled machine gun that later exploded. Iran blames Israel for those slayings as well.

SINGING AMONG THE CENTRIFUGES

The extent of the damage to Natanz remains unclear at the moment. Iran has yet to broadcast any images of the facility on state television, though an official said first-generation centrifuges had been damaged. It’s unclear if any of the damage will be able to be seen from the air as its centrifuge halls are all underground. NASA fire satellites detected no visible blasts at the facility either Saturday or Sunday.

The longterm effects on Iran’s atomic program as a whole also remain unclear. If the attack halts centrifuges at Natanz, they still spin at Fordo. Ali Akbar Salehi, the head of the Atomic Energy Organization of Iran, vowed Sunday to keep advancing the country’s nuclear technology.

The sabotage comes at a sensitive time for outgoing President Hassan Rouhani, whose administration is trying to claw back its signature diplomatic achievement through the Vienna talks. Term-limited from seeking office again, the relative-moderate Rouhani will bow out to whoever wins Iran’s upcoming June presidential election.

If Iran can’t regain the benefits of the deal, it could boost hard-liners within the Islamic Republic. Already, some media outlets demanded Monday for Rouhani to pull out of the Vienna negotiations.

The Natanz sabotage also further links Iran’s nuclear program to the propaganda aired by state television urging the country to resist outside pressure. Before the sabotage, state TV aired a segment showing men in white lab coats singing among Natanz’s silver centrifuges, some holding pictures of the scientists slain in the earlier assassinations.

“We are proud and victorious in science,” the men sang. “We believe in ourselves and don’t pin hopes to foreigners.”

The singers likely weren’t nuclear scientists, however. Iran since the killing has carefully blurred their images, worried about them being targeted again.

FILE – In this April 10, 2021, file photo released by the official website of the office of the Iranian presidency, Iranian President Hassan Rouhani, second from right, listens to the head of the Atomic Energy Organization of Iran Ali Akbar Salehi while visiting an exhibition of Iran’s new nuclear achievements in Tehran, Iran. (Iranian Presidency Office via AP, File)