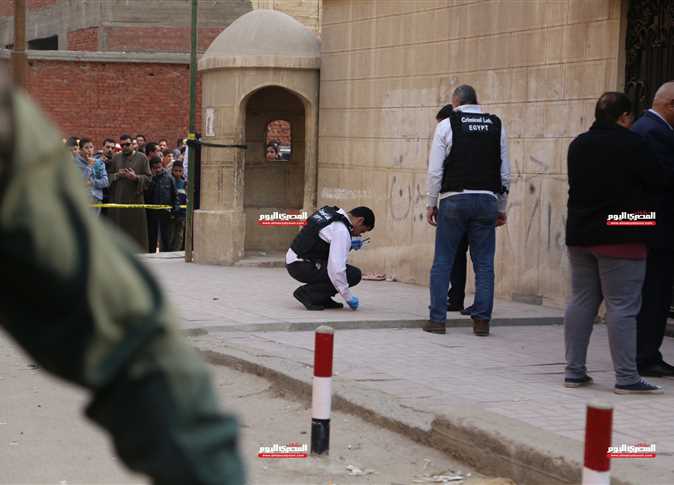 On Friday morning, 20-year-old Mina Nabil went to the Church of the Virgin Mary in Helwan to participate in the weekly prayers, but he did not know that that day would witness a terrorist attack against another church close by, leading to a number of deaths.

A few minutes after the prayers started in the Virgin Mary church, Mina noticed one of the women participating in the prayer slamming her face with her hands after receiving a very short telephone call from her daughter.

The daughter was praying in the church of Mar Mina, about a kilometer away. She shouted in the phone, “Help, mama, [someone is] shooting at the church and people died.”

“We used to pray every Friday in the church, but on Friday it was crowded with worshipers, it was the last Friday of the year, and the majority were eager to attend,” Mina said.

Once the worshipers heard the news from the shocked mother who was in a hysterically state, the worshipers went to the church of Mar Mina. Mina and his friend Ayman Fawzi were among those hurrying to Mar Mina church.

“Of course we had relatives and acquaintances [in the Mar Mina church],” Mina said. “We rushed to check on them. The police in the church asked the worshipers to leave.”

Mina talks about the first moments after the incident, saying “we were surprised by an unknown person walking in the western street, near the church of Mar Mina, with a short beard, wearing a jacket and trousers and carrying a small backpack, holding an automatic weapon in his hand and firing randomly at buildings and the street. He shot a lady who fell on a nearby pavement which was soaked in her blood.”

“To everyone he seemed to be the culprit, and the people in the street were afraid of him, until at least two policemen appeared in two different positions. They started firing at him until one of them shot him in the foot so he fell down on the ground, and the another one came from behind and restrained him,” Mina said.

“The policemen asked us to stay away from the terrorist, after it was clear that he had bombs. We were afraid that they may explode at any time. The policemen took him injured. Many policemen came to the place. We learned later that all the churches in the area were closed at instructions from the security,” he added.

For 10 minutes before the arrest of the terrorist, Atta, a man in his thirties, was following the scene from his window opposite to the Mar Mina church.

“I was in the house, and suddenly I heard a terrifying sound of gunfire. I went quickly to the window and I saw someone holding an automatic weapon. He attacked a police officer in the vicinity of the church, and randomly shot at some people on the street opposite the church,” Atta said.

“The terrorist shot at an old man walking with a crutch named Wadiaa al-Qamas, who lives next to us and has a shop near the church. He did not have mercy on him when he shot him in the head. It was clear that he was killing everyone suspected of being Christian. He moved toward the main western road,” Atta said. “The policeman, who guarded the gate of the church, had already prevented a disaster that would have occurred if the terrorist entered the church at the time while such [a large] number of worshipers were inside.”

After the incident, Interior Ministry officials began examining the circumstances of the attack and viewing the records of surveillance cameras of shops in the area called, while a team of prosecutors and auxiliary bodies conducted on-the-ground investigations at the scene of the attack.

Signs of random shots were visible on church walls, nearby roads as well as shots that hit at least six parked cars and traces of blood remained on the road.