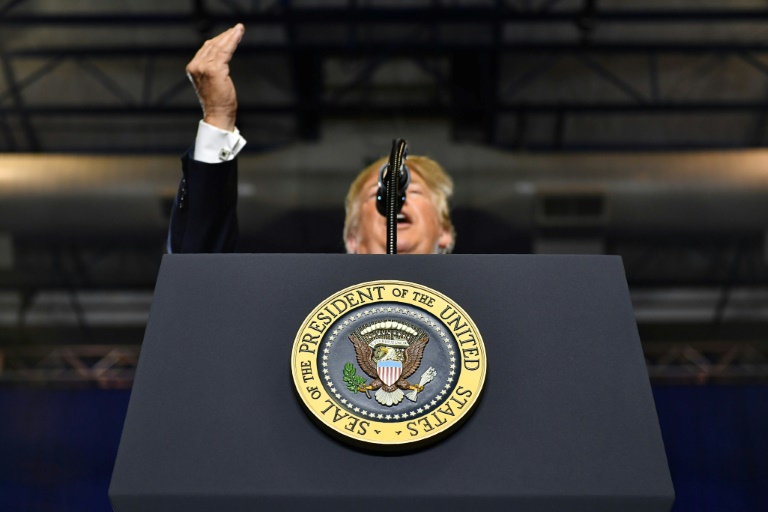 Since US President Donald Trump weaponized the term “fake news” during the 2016 presidential election campaign, the phrase has gone viral.

Increasingly it is used by politicians around the world to denounce or dismiss news reports that do not fit their version of the truth.

But as news outlets defend their work, false information is saturating the political debate worldwide and undermining an already weak level of trust in the media and institutions.

The term has come to mean anything from a mistake to a parody or a deliberate misinterpretation of facts.

At the same time, misinformation online is increasingly visible in attempts to manipulate elections.

The build-up to Trump’s 2016 victory, for example, saw numerous examples of hoaxes and false news stories: from Hillary Clinton’s alleged links to a child sex ring to a false report the Pope had endorsed Trump.

Misinformation had “a significant impact” on voting decisions, according to Ohio State University researchers, who questioned voters. But it was impossible to prove that false information swung the election for Trump.

As president, Trump still denounces any information that displeases him as “fake news”. Experts say his aides, meanwhile, have offered a mixture of truth and distortions, sometimes described as “alternative facts”.

Some studies even suggest that, as partisanship has risen, more people are willing to believe falsehoods. One 2017 survey, for example, showed 51 percent of Republicans still believed that Barack Obama was born in Kenya, despite the hoax having been debunked.

In 2018, the average level of trust in the news, across 37 countries, remained relatively stable at 44 percent, according to a poll by YouGov for the Reuters Institute for the Study of Journalism.

But false information spread by authority figures has not helped matters.

In Ukraine, for example, authorities staged the death of Russian journalist Arkady Babchenko at the end of May, to foil a real plot to assassinate him.

Reports of the fake death made in good faith by mainstream media were “a godsend for paranoid people and conspiracy theorists,” said Christophe Deloire, secretary general of media rights watchdog Reporters Without Borders.

Trust in traditional media remains higher than for social networks, according to the YouGov poll. Only 23 percent of those polled said they trusted the news they found on social media.

But a study released by the Massachusetts Institute of Technology (MIT) in March found that false news spreads more rapidly on Twitter than real news does.

Many believe Facebook is the main vehicle for false information.

It was forced to admit that Cambridge Analytica, a political firm working for Donald Trump in 2016, had hijacked the data of tens of millions of its users. Some critics of the Brexit referendum accuse Cambridge Analytica of having used that data to swing voters towards the “Leave” vote.

In the US, Special Counsel Robert Mueller’s investigation into Trump’s campaign links with Russia has targeted Facebook accounts and private pages managed by the Internet Research Agency, a Russia-based “troll farm”.

Such was the level of concern that Facebook boss Mark Zuckerberg has been questioned by the European Parliament and the US Congress.

The US giant in 2018 announced new measures to improve technology for tackling false information around the world.

Another country where Facebook has come under fire for spreading false information is Brazil, the scene of a giant truckers’ strike last May.

Most of the messages during the strike were spread on WhatsApp, a messaging service with more than one billion global users, owned by Facebook.

WhatsApp has also been accused of circulating false information. It came under immense pressure after the lynching of more than 20 people accused of child abduction in recent months in India, its largest market. They were sparked by false news reports.

WhatsApp took out full-page advertisements in Indian newspapers offering “easy tips” to identify fact from fiction. But the company stands by its policy of protecting the privacy of its users with encryption technology.

Google, also under pressure for spreading misinformation, announced in March that it was investing $300 million over three years to support a series of projects to tackle false information and support “credible” media organizations.

Its search engine promotes verifications carried out by fact-checking organizations.

Despite the creation of dozens of fact-checking initiatives in recent years, journalists have to run just to keep up as misinformation techniques evolve.

A relatively new development is deep fakes — manipulated videos that appear genuine but depict events or speech that never happened.

For now, deep fakes are technically difficult to create and have not yet had a big impact, but with progress they may further blur the online line between true and false.