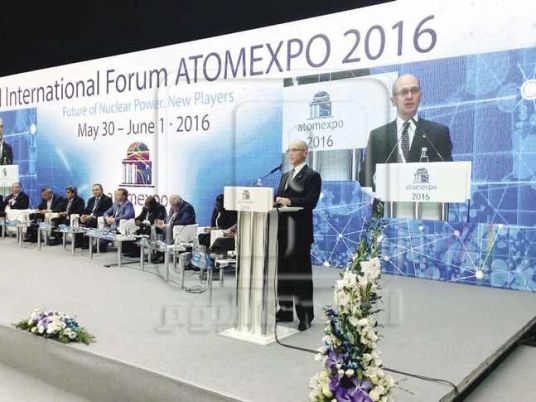 Electricity Minister Mohamed Shaker will hold final talks in Moscow in the next few days to set a date for the signing of contracts over the construction of a Russian-built nuclear power station in Dabaa, north Egypt.

Egypt has considered building a nuclear power station in Dabaa for several decades, and has been in negotiations with Russian nuclear firm Rosatom since 2015 over plans for the state-owned firm to fund and construct a plant in Egypt for completion by 2022, Reuters reported in November last year.

Shaker is in Moscow to settle all issues between the two sides before the contracts can be signed. Details of the construction, maintenance and operating of the station, as well as the fuel required to power it, are being covered, Al-Masry Al-Youm was informed.

Sources from the Nuclear Power Plants Authority, participating in the International Forum ATOMEXPO 2016 in Moscow that runs May 30 to June 1, revealed that the legal and technical matters that caused the delay in signing the contract have now been settled. An Italian consultancy firm revised the contract terms, they added.

A delegation including the heads of the Egyptian Atomic Energy Authority, nuclear stations and Nuclear and Radiological Regulatory Authority is currently on a one-week visit to Moscow to meet officials of Rosatom.

Speaking to Al-Masry Al-Youm, Rosatom General Director Sergei Kiriyenko said that in order for the agreement with Egypt to be finalized, numerous matters have had to be covered, such as the nuclear fuel supply to the reactors, the role of both sides during the operation, maintenance and repair of reactors, methods of treating nuclear waste, training the plant's workers and the improvement of standards and legislation within Egypt's nuclear energy and nuclear infrastructure sectors.

Rosatom, according to Kiriyenko, does not sign agreements with any country before having a full understanding of its legal system and infrastructure. Although the disposal of nuclear waste remains the biggest challenge, Kiriyenko said Rosatom ensures countries comply with proper methods of waste disposal and staff training through the signing of contracts.

Chairman of the World Association of Nuclear Operators (WANO) Jacques Regaldo said in his welcome address for the Moscow forum: “Nuclear energy is facing new global challenges today. Many new projects are being launched by newcomers to the industry whilst at the same time many countries have to deal with the issue of ageing plants.”

“There is a growing need for information and transparency with increasingly difficult economic conditions. In this global context, WANO’s role is to stay focused on nuclear safety fundamentals. Relying on a strong, united and vigilant community, WANO’s mission is to raise safety standards in operation all over the world. Safety is our first priority because it is the condition for the acceptance and development of nuclear energy,” he added during his speech at the forum, in which around 4500 nuclear experts representing 55 countries took part.

The general director of the World Nuclear Association, Agneta Rising, stated, “The need for access to affordable and reliable electricity supplies is growing as the global population increases and countries seek to develop their economies and improve the living standards of their citizens.”

“The World Nuclear Association has developed its own vision for the future of electricity: Harmony. Harmony envisages meeting the world’s growing demand for electricity with a diverse mix of low carbon generating technologies deployed in such a manner that the benefits of each are maximized while the negative impacts are minimized. Our target for nuclear energy is to provide 25 percent of electricity in 2050, requiring roughly 1000 GWe of new nuclear capacity to be constructed — depending on other factors like reactor retirements and electricity demand growth,” she added.

Russian Environment Minister Sergei Donskoi said that the world needs to begin eco-friendly nuclear engineering through electrical production that is free of carbon, adding that Russia is now working towards this goal.

Meanwhile, the Egyptian ambassador to Moscow, Mohamed al-Badry, told Al-Masry Al-Youm that embarking on the construction of the nuclear power station in Dabaa is of importance to the development of industry in Egypt. He added that negotiations with Moscow are ongoing ahead of the project's start.