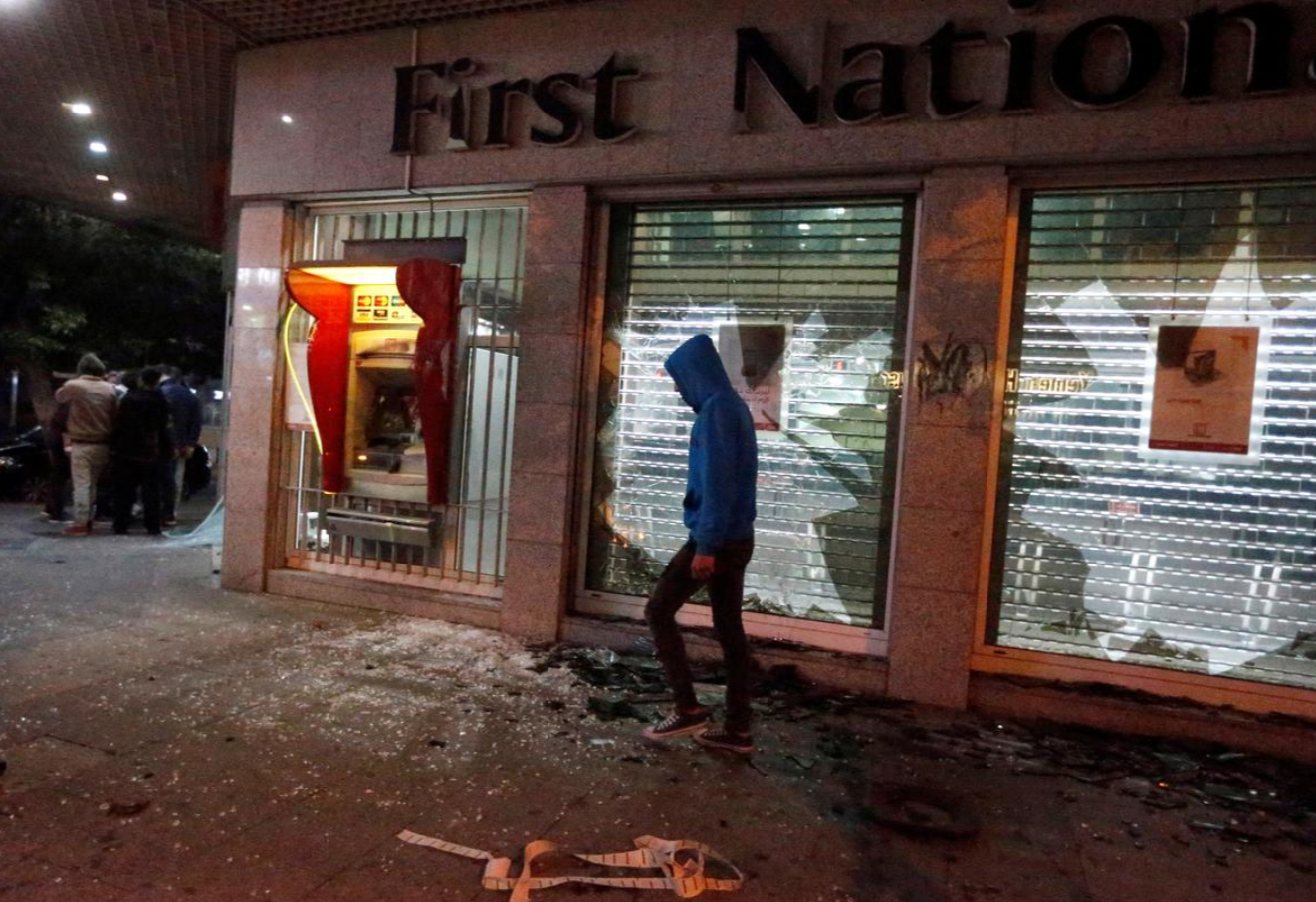 BEIRUT (Reuters) — As cash runs short at Lebanon’s banks, so has the patience of depositors. Hit by restrictions on withdrawals, some are taking extreme steps, occupying branches and in one case taking an employee hostage, to squeeze what they can from their accounts.

Lebanon’s financial crisis and dollar shortage have prompted commercial banks to impose strict caps on withdrawing dollars and a block on most transfers abroad, leaving Lebanese, many of whom are paid in dollars, strapped for cash.

Since protests directed at the country’s elite erupted on Oct. 17, commercial banks seen as bearing part of the blame for the crisis have been targeted, including in late-night riots which left bank facades smashed and ATMs destroyed in Beirut’s Hamra district.

With withdrawal caps set at a few hundred dollars per week, some depositors have tried to strong-arm their way to their cash.

Lebanon has seen 101 incidents at banks from Nov. 1 to Jan 13, ranging from scuffles and sit-ins to more violent assaults on bank branches, according to security sources.

“It’s like a snowball, growing each day,” said a security source. “It’s starting to reach a choking point and people are suffocating.”

When one depositor who identified herself only as Lama and five colleagues from the southern city of Sidon were denied $400 their bank had promised, they returned with 10 protesters in a show of force.

The group stormed the branch, Lama said, scuffling with security and bank employees before the branch manager agreed to give Lama and her colleagues $400 per week.

“What I discovered is that with pressure or fear from us … they give in,” said Lama.

When another bank in Sidon refused to cash Mostafa al-Bitar’s check this month he returned with his company’s forklift and two trucks and blocked its entrance. The branch manager cashed the check.

“We were forced to do this to get our rights … the situation is getting much worse,” said Bitar.

A heavier police presence and a hotline for bank employees to call in rapid support from security forces implemented after the unrest began has done little to deter outraged depositors.

Protesters on Jan. 3 took a Blom Bank branch manager in the northern region of Akkar hostage for several hours to demand dollars for a client, releasing the manager only when security intervened, according to a Blom Bank statement.

Banks across Akkar were hit by arson and vandalism. They shut on Jan. 3 and have remained closed.

“We’ve been working in the banking sector for a long time and this is something we’ve never seen before,” said a Tripoli-based bank employee.

Heavily indebted Lebanon has struggled since the government was toppled by the resignation of Prime Minister Saad al-Hariri in October as a result of protests against corruption and bad governance seen as root causes of the economic problems. The Lebanese pound has lost around half of its value.

Foreign donors have held back on releasing about $11 billion in support until a new government and reform agenda are in place.

After the unrest began in October lenders shut intermittently, the result of a bank staff union strike over safety concerns, paralyzing the economy and trade. They re-opened on Nov. 19 after an agreement to enhance security and police stand outside most branches.

“There’s always a policeman at the bank, but what is he going to do when 60 or 70 people descend on the bank?” said one Beirut-based bank employee. “I don’t know when the customer in front of me is going to rage on me.”

Image: Shattered windows are seen at a bank during protests against what demonstrators say is economic hardship and the lack of a new government, on January 14, 2020 (Reuters/Mohamed Azakir/File photo)

In rebuke to Lebanese leaders, U.N. says 'irresponsible' to leave country without government