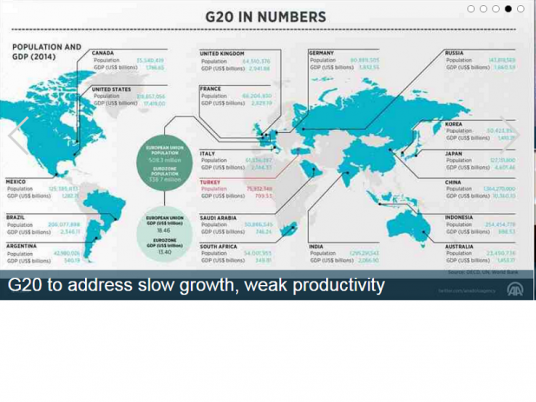 Turkey will welcome leaders of the world’s major economies to Antalya for the G20 Summit at the weekend.

The summit is dedicated to increasing growth and creating jobs around the world. With global growth expected at 3.1 percent according to the International Monetary Fund (IMF), the G20 will propose ways to stimulate economic activity and increase productivity.

Long-run potential output growth has fallen broadly across the world's economies since the financial crisis of 2008, according to the IMF.  These include crisis legacies in some advanced economies: High public and private debt, financial sector weakness, and low investment.

The Turkish G20 presidency has focused on investment, inclusiveness and implementation of G20 proposals. The G20 economies are committed to boosting global economic growth by an additional 2 per cent by 2018, which would boost the global economy by $2 trillion.

Under Turkey's G20 presidency, inclusiveness is aimed at ensuring that the benefits of growth and prosperity are shared across all parts of society. Small and medium-sized enterprises, women, youth employment are all part of this framework.

Three G20 members – China, the U.S. and the European Union — control over 50 percent of the global economy. The BRICS (Brazil, Russia, India, China, and South Africa) account for around 29 percent. Nine of the G20 members each account for under 2 percent. The G20’s Asian economies contribute around one-third of the world's economy.