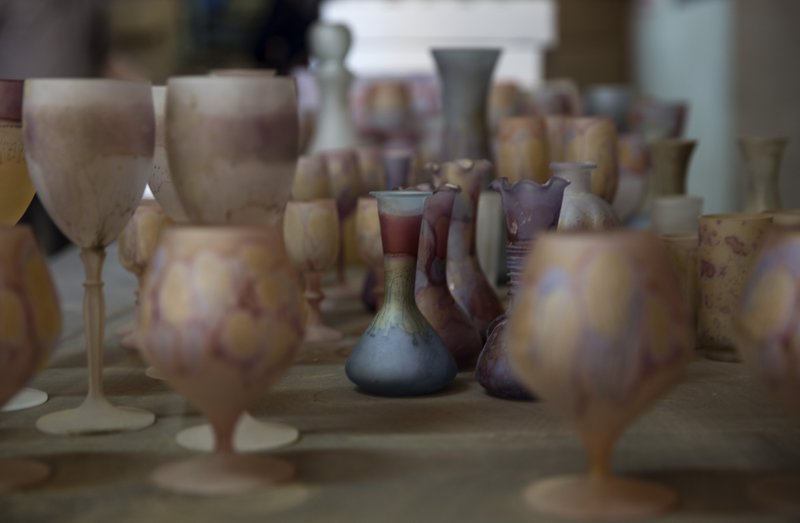 For decades, these traditional crafts defined the economy of the coastal Palestinian enclave, employing thousands of people and exporting across the region. Today, the industries are almost non-existent.

While such professions have shrunk worldwide in the face of globalization and Chinese mass production, Gazan business owners say Israel’s 12-year blockade of the territory has accelerated the trend.

“We have been economically damaged. We are staying, but things are really difficult,” said Abed Abu Sido, one of Gaza’s last glassmakers, as he flipped through a glossy catalog of his products.

At his quiet workshop, layers of dust covered the few remaining glass artifacts, requiring him to scrub them to reveal their colors. Cardboard boxes of unfinished products and materials were stacked floor-to-ceiling.

Abu Sido opened his business in the 1980s, selling many of his items to vendors in the popular marketplace of Jerusalem’s Old City. In his heyday, he said he took part in exhibitions in Europe.

That changed after 2007, when the Hamas militant group overran Gaza, and Israel and Egypt responded by sealing Gaza’s borders. Abu Sido laid off his 15 workers and ceased operations the following year.

Israel says the blockade is needed to contain Hamas and prevent it from arming. But the closure, repeated rounds of fighting with Israel and a power struggle with the rival Palestinian Authority in the West Bank have hit Gaza hard.

Israel has greatly restricted exports and limited imports of raw materials. With unemployment over 50%, demand from the local market is weak. Israel blames the situation on Hamas, an armed group that opposes Israel’s existence.

In recent months, Israel has launched a number of “pilot” programs to allow Gaza businesses to export. But business owners say that after so many years of being unable to export, they have lost their former business partners and cannot simply restart operations.

Its living room sets, recliners, dining tables and chairs were once shipped to markets in the West Bank, Israel, Persian Gulf and America. The business flourished from 1975 until the outbreak of the second Palestinian uprising in 2000.

Things worsened after the blockade, and owner Tareq Khalaf said he began laying off his 30 full-time workers. Now he has just five part-timers.

Though Israel has lifted the ban on some furniture exports, Khalaf said his clients moved to other suppliers long ago. Hamas taxes on raw materials have added another obstacle.

“This is a traditional Palestinian profession. The official authorities should make it a priority,” he said. “They have to support this industry.”

Thousands of unsold clay bowls, pots, vases and jugs sit in the yard of the Atallah pottery workshop. On a recent day, three employees shaped clay on the wheel, while two others mixed mud. Khairi Atallah, the pottery maker, said this is all that remains of the 50 workers he once employed.

Atallah said he can’t export to the West Bank and Israel, which absorbed up to 90% of his pottery before the blockade.

“The income is no longer enough to get by,” he said. He said he keeps operating because his father doesn’t want the generations-old business to close during his lifetime.

Mahmoud Sawaf, 73, believes he is the last weaver in Gaza. With the territory closed to tourists, international aid workers are the only people keeping him afloat. Cheaper straw mats have flooded Gaza, and local residents can’t afford his handmade carpets. But the foreigners still buy them.

“Even at this age I continue to work,” he said. “I will not give up and quit.”

By FARES AKRAM and KHALIL HAMRA

In this Saturday, July 6, 2019 photo, samples of hand-painted glasses are displayed on a table in a closed glass factory in Gaza City. Talk about old Gaza, and what pops up are images of clay pottery, colorful glassware, bamboo furniture and ancient frame looms weaving bright rugs and mats. As such professions could be dying worldwide, the pace of their declining is too fast in Gaza that out of its some 500 looms, only one is still functioning. (AP Photo/Khalil Hamra)