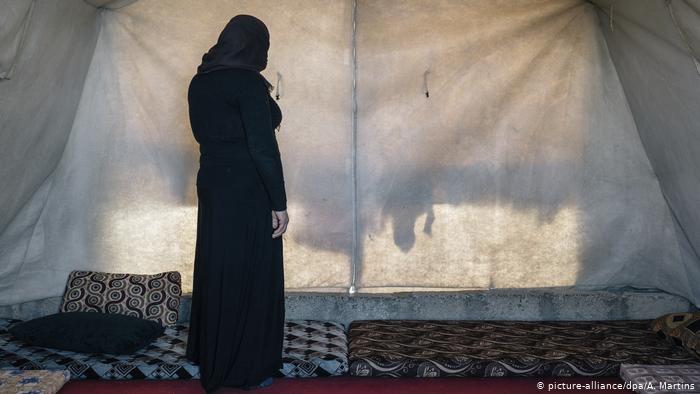 “Germany must not be a safe haven for war criminals.” It is a sentence police inspector Klaus Zorn repeats several times with conviction. He and his team are determined to collect as much evidence as possible ready to be used for any future prosecutions.

Zorn sits in a high-security concrete building in the quiet town of Meckenheim in southern North Rhine-Westphalia, Germany’s most populous state. The Federal Criminal Police Office (BKA) has operated a field office here since the late 1970s, when Germany was still a divided country. At the time, the force’s main purview was investigating terrorist activity carried out by the left-wing extremist Red Army Faction (RAF).

Zorn, too, investigates terrorists. He serves as deputy head of the War Crimes Unit, more officially known as the Central Office for Combating War Crimes under International Criminal Law (ZBKV). Currently, the detective and his colleagues are busy gathering evidence for history’s latest genocide: The mass killing of the Yazidis by the “Islamic State” (IS). The crimes in question happened five years ago in northern Iraq, almost 2,000 miles (3,200 kilometers) away as the crow flies. In early August 2014, IS fighters attacked the Yazidis, a heterodox ethnoreligious group of Kurdish heritage and language. Before the attack, about 500,000 Yazidis lived around their sacred mountain, Sinjar, which lies between the regional metropolis, Mosul, to the west and the Syrian border to the east. IS branded them “unbelievers” and “devil worshipers.” The jihadists targeted them systematically and mercilessly.

Nearly 10,000 people — mainly men and boys over 12 — were murdered. More than 70 mass graves have been discovered in the region. About 7,000 Yazidi women and children were abducted, sold as slaves, abused and raped. Hundreds of thousands fled — and only a few now dare to return home. Many survivors remain traumatized. This is especially true of the around 3,500 women and children who were able to escape their enslavement and today are important witnesses of the atrocities.

For renowned international criminal lawyer Lars Berster of the University of Cologne, the case is crystal-clear: The actions of IS against the Yazidis constitute genocide. The decisive factor, he says, is the perpetrators’ objective: “They must aim to destroy a national, ethnic or religious group, in whole or in part, and IS’ intention to exterminate was very visible.” In Germany, the International Criminal Code came into force in June 2002. Under its provisions, the German judiciary can always prosecute crimes under international law, such as those of the Yazidi genocide, even if they were not committed on German soil and neither the perpetrators nor the victims are Germans.

From survivor to witness: Nadia Murad

Many victims of IS barbarism  — and thus also potential witnesses — now live in Germany. Since 2015, more than 85,000 Yazidis from Iraq and Syria have sought protection in Germany. Of particular importance for the criminal investigations are the approximately 1,000 Yazidi women and children who have been brought to Germany since early 2015 under a special humanitarian program of the Baden-Württemberg state government. One of them is 2018 Nobel Peace Prize Laureate Nadia Murad. Now 26, she has testified extensively to German investigators and encouraged other women to do the same. The investigators have not released the contents of the interrogations, but a glimpse of the endless torments to which women like Murad were subjected was revealed in a June 2016 UN report that included the German investigations.

After being taken captive by IS, the women were traded for amounts between $200 (€180) and $1,500 and often sold several times over at slave markets and through online auctions. Rape and beatings were the order of the day. Even little girls were raped regularly. In order to keep the enslaved mothers docile, their children were abused and tortured. One witness reported that an IS fighter killed several of her children as a punishment for her trying to escape. Often, the IS fighters’ wives participated in the abuses. Some German IS followers belonged to the slaveholders as well.

More than 100 women have already testified for the War Crimes Unit, with about 100 more yet to do so. Zorn emphasizes that the Yazidi women are interviewed exclusively by female investigators, in a time-consuming process that encourages trust. Often an entire week is scheduled for a witness to arrive, build up a rapport with the investigators, testify and depart.

Testifying means that women have to discuss in very intimate detail the torments they suffered. They have often had bad experiences with the police in their home countries, so the German investigators try to convey a sense of security and to create an atmosphere for conversation that is as pleasant as possible. In the interrogation room, a tablecloth is laid out or a bouquet of flowers set up. The witnesses may also bring friends, relatives and caregivers. Often it is in this room that the witnesses describe their cruel experiences for the very first time. But if the judicial process then takes its course, the women must tell these experiences over and over again in court. Having to repeatedly relive such memories is very difficult for traumatized people. “Not every victim is up to the pressure of testifying in court,” says Zorn. The war crimes investigators want to bring the perpetrators to justice, “but not at all costs. Consideration is part of how we see our work,” Zorn underlines. The information collected is then used in consultation with the prosecutor only for the purposes of further investigation.

What Zorn and his colleagues find out ends up in the Federal Prosecutor’s Office in the southwestern city of Karlsruhe, which is responsible for the prosecution of international crimes. Since 2018, a prosecutorial team has been dedicated exclusively to the genocide of the Yazidis. The lawyers there have seen a great deal and heard even more — for example, while investigating the Rwandan genocide and atrocities committed in the Democratic Republic of the Congo.

But according to one of the prosecutors, the massive, systematic use of sexualized violence by IS is unparalleled. Like Zorn, he, too, speaks of the heavy traumas the witnesses have been forced to endure. This is evidenced by the fact that during the interviews many of the women have blacked out or fainted, evidently a self-protection mechanism of the body. He also underlines the cultural and linguistic issues the investigators encounter. “As prosecutors, we are very much concerned with facts and figures; our witnesses are not. There are always problems with times and quantities.”

Despite years of investigative work, only one indictment has been filed in Germany so far — against Jennifer W., a German woman accused of having traveled to Iraq to join IS. That trial, taking place in Munich, is the first in the world to deal with the IS extermination campaign against the Yazidis. Jennifer W.’s trial is the first time the IS crimes against the Yazidi have been at issue in a court case anywhere in the world

There are also two open arrest warrants for leading IS members on charges of war crimes, crimes against humanity and genocide. In addition, the German prosecutors are pursuing preliminary proceedings in several other cases. “In international criminal law you need to persevere,” says one of the prosecutors.

This may all sound paltry in comparison to the scale of the crimes. But for the Yazidis, it is enormously important that Germany has even taken up the prosecution, says German-Yazidi journalist Düzen Tekkal. She has spoken to many survivors in both Germany and northern Iraq, who told her: “We do not want to eat or drink. To recover, we need justice.”

Agony of Yazidi women torn between IS kids, or return home

Yazidi women seek acceptance for children born of IS rape