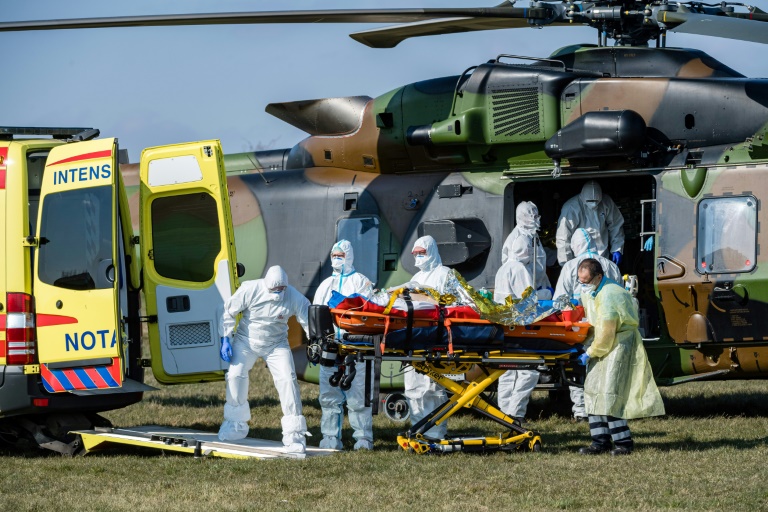 The number of confirmed coronavirus cases around the world has soared past one million and fatalities have topped 50,000 as the United States reported the highest daily death toll of any country so far.

Despite more than half the planet living in some form of lockdown, the virus is continuing to spread rapidly, and to claim lives at an alarming pace, with the US, Spain and Britain all seeing their worst days yet.

The economic cost of the pandemic is getting starker by the day, with new figures showing that an extra 6.65 million Americans signed on for unemployment benefit last week, taking to 10 million the number of people in the US who lost their jobs in the last two weeks of March.

And economists warned it was going to get worse.

“No words for this,” said Ian Shepherdson of Pantheon Macroeconomics.

“Total layoffs between the March and April payroll surveys look destined to reach perhaps 16 to 20 million, consistent with the unemployment rate leaping to 13 to 16 percent. In one month.”

Financial ratings agency Fitch on Thursday predicted that the US and eurozone economies would shrink this quarter by up to 30 percent as struggling businesses slash investment and unemployment dampens consumer spending.

The Asian Development Bank warned Friday the global economy could take a $4.1 trillion hit from the virus — equivalent to five percent of worldwide output.

World leaders have announced huge financial aid packages to deal with the crisis and the World Bank on Thursday approved a plan to roll out $160 billion in emergency cash over 15 months.

The United States now accounts for around a quarter of all known infections around the globe, and its death toll is rocketing up.

About 6,000 people have died in the US outbreak, according to a tally by Johns Hopkins University, more than 1,100 of them in the last day.

White House experts say between 100,000 and 240,000 Americans could ultimately die from the disease.

Disaster response agency FEMA on Thursday asked the US military for 100,000 body bags.

Around 85 percent of Americans are under some form of stay-at-home order.

In New York, the epicenter of the US outbreak, Mayor Bill de Blasio urged residents to cover their faces when outside and Vice President Mike Pence said there would be a recommendation on the use of masks by the general public in the next few days.

Europe has been at the center of the crisis for weeks, but there have been signs that the epidemic could be approaching its peak there.

Spain and Britain saw record numbers of new deaths in a 24-hour period — 950 and 569 respectively.

Italy and Spain together account for almost half of the global death toll, but experts say the number of new infections in both countries is continuing to slow.

“The data show the curve has stabilized” and the epidemic has entered a “slowdown” phase, Spanish Health Minister Salvador Illa said.

The virus has chiefly affected the elderly and those with pre-existing medical conditions, but recent cases of deaths among teenagers and even of a six-week-old baby have highlighted the dangers for people of all ages.

“The very notion that ‘COVID-19 only affects older people’ is factually wrong,” said Hans Kluge of the World Health Organization on Thursday.

Severe cases have been reported among teens and young adults, with some requiring intensive care and several deaths, he said.

In Britain, Prime Minister Boris Johnson vowed to “massively increase testing” as his health minister said the aim was 100,000 tests a day within weeks.

Johnson, who has himself tested positive for COVID-19, has been criticised for his government’s failure to provide widespread screening, particularly for frontline health workers.

Britain was also rushing to build field hospitals, with the government saying Friday it would erect two new facilities to cope with 1,500 extra patients.

In Russia, President Vladimir Putin extended paid non-working days until the end of April as the number of confirmed cases jumped by more than a quarter to 3,500.

Most of the Russian population is on lockdown, while Thailand became the latest country to impose strict measures with the introduction of a curfew from Friday.

The virus is beginning to get a grip on the developing world, where experts have warned of disasters among communities already ravaged by poverty.

In northeast Nigeria, aid workers say it could rampage through sprawling camps for 1.8 million people displaced by a decade-long Boko Haram insurgency.

“There is no health system to contain that virus… it will spread like wildfire and affect all involved,” said one United Nations worker on condition of anonymity.

“It is really scary.”

Image: AFP / JENS SCHLUETER German medics take care of one of two French patients infected with the novel Covid-19 upon arrival at a little airport near Nordhausen/Harz

Activists slam China's use of bear bile in virus treatment