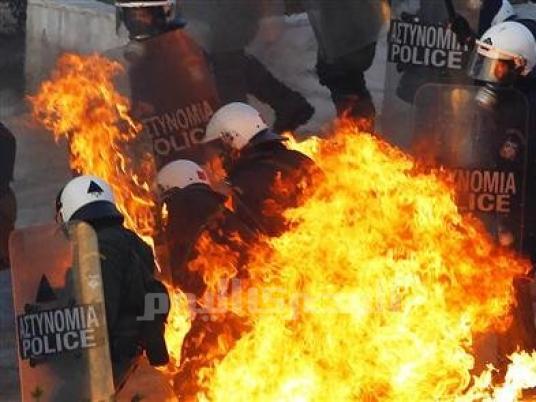 Cinemas, cafes, shops and banks were set ablaze in central Athens and black-masked protesters fought riot police outside parliament before lawmakers voted on the package that demands deep pay, pension and job cuts — the price of a 130 billion euro ($172 billion) bailout needed to keep the country afloat.

State television reported the violence had spread to the tourist islands of Corfu and Crete, the northern city of Thessaloniki and towns in central Greece. Police said 150 shops were looted in the capital and 34 buildings set ablaze.

Altogether 199 of the 300 lawmakers backed the bill, but 43 deputies from the two parties in the government of Prime Minister Lucas Papademos, the socialists and conservatives, rebelled by voting against it. They were immediately expelled by their parties.

Asian shares and the euro gained modestly Monday, relieved by the Greek parliament's passage of austerity measures that put the country a step closer to securing a much-needed bailout fund and avoiding a messy default.

MSCI's broadest index of Asia Pacific shares outside Japan edged up as much as 0.3 percent on the news.

The rebellion and street violence foreshadowed the problems the Greek government faces in implementing the cuts, which include a 22 percent reduction in the minimum wage — a package critics say condemns the economy to an ever-deeper downward spiral.

Papademos, a technocrat brought in to get a grip on the crisis, denounced the worst breakdown of order since 2008, when violence gripped Greece for weeks after police shot a 15-year-old schoolboy.

"Vandalism, violence and destruction have no place in a democratic country and won't be tolerated," he told parliament as it prepared to vote.

But he admitted that imposing the austerity measures  on a nation that has already endured several years of cuts would be tough.

"The full, timely and effective implementation of the program won't be easy. We are fully aware that the economic program means short-term sacrifices for the Greek people," Papademos said.

Greeceneeds the international funds before March 20 to meet debt repayments of 14.5 billion euros, or suffer a chaotic default which could shake the entire euro zone.

Outside parliament chaos reigned. A Reuters photographer saw buildings in Athens engulfed in flames and huge plumes of smoke rose in the night sky.

"We are facing destruction. Our country, our home, has become ripe for burning, the center of Athens is in flames. We cannot allow populism to burn our country down," conservative lawmaker Costis Hatzidakis told parliament.

The air in Syntagma Square outside parliament was thick with teargas as riot police fought running battles with youths who smashed marble balustrades and hurled stones and petrol bombs.

Terrified Greeks and tourists fled the rock-strewn streets and the clouds of stinging gas, cramming into hotel lobbies for shelter as lines of riot police struggled to contain the mayhem.

State NET television reported that trouble had also broken out in Heraklion, capital of Crete, as well as the towns of Volos and Agrinio in central Greece.

On the streets of Athens many businesses were ablaze, including the neo-classical home to the Attikon cinema dating from 1870 and a building housing the Asty, an underground cinema used by the Gestapo as a torture chamber during World War Two.

The EU and IMF say they have had enough of broken promises and that the funds will be released only with the clear commitment of Greek political leaders. The two institutions want assurances that lawmakers will implement the reforms no matter who wins a potential election in April.

Euro zone paymaster Germany ratcheted up the pressure on Sunday. "The promises from Greece aren't enough for us any more," German Finance Minister Wolfgang Schaeuble said in an interview published in Welt am Sonntag newspaper.

"Greece needs to do its own homework to become competitive, whether that happens in conjunction with a new rescue program or by another route that we actually don't want to take."

When asked if that other route meant Greece quitting the euro zone, Schaeuble said: "That is all in the hands of the Greeks themselves. But even in the event (Greece leaves the euro zone), which almost no one assumes will happen, they will still remain part of Europe."

The bill sets out 3.3 billion euros (US$4.35 billion) of extra budget cuts for this year alone.

It also provides for a bond swap to ease Greece's debt burden by cutting the real value of private-sector investors' bond holdings by some 70 percent. Greece would have missed a February 17 deadline to offer a debt "haircut" to private bondholders if the vote had not been passed.

Many Greeks believe their living standards are collapsing already and the new measures will deepen their misery.

"Enough is enough!" said 89-year-old Manolis Glezos, one of Greece's most famous leftists and a national hero. "They have no idea what an uprising by the Greek people means. And the Greek people, regardless of ideology, have risen."

Glezos is a national hero for sneaking up the Acropolis at night in 1941 and tearing down a Nazi flag from under the noses of the German occupiers, raising the morale of Athens residents.