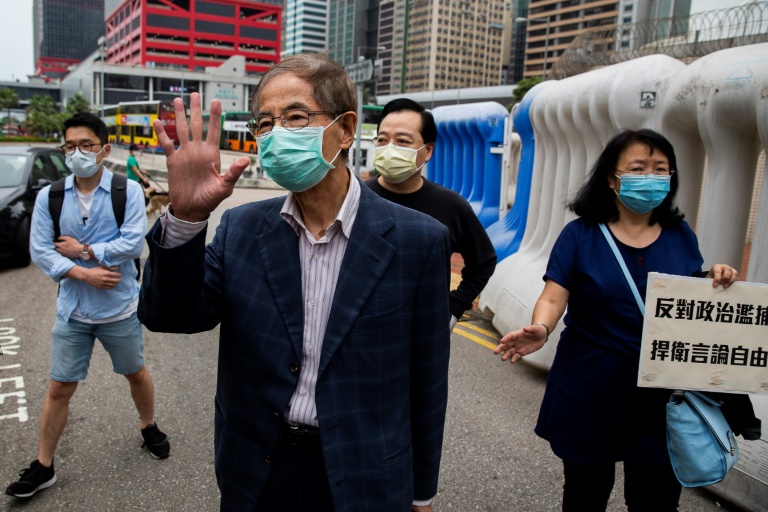 Among those targeted was media tycoon Jimmy Lai, 72, founder of anti-establishment newspaper Apple Daily, who was arrested at his home.

They are accused of organizing and taking part in unlawful assemblies in August and October, according to the police.

Five were arrested under suspicion of publicizing unauthorized public meetings in September and October.

“The arrestees were charged or will be charged with related crimes,” superintendent Lam Wing-ho said.

All 15 are due to appear in court mid-May.

Media boss Lai was previously detained in February over his participation in another August rally that was banned by police for security reasons.

“Eventually I’ve become a defendant. How do I feel? I’m very much relieved,” Martin Lee, known as the father of democracy in Hong Kong, told media after he was bailed.

“For so many years, so many months, so many good youngsters were arrested and charged, while I was not arrested. I feel sorry about it,” the 81-year-old barrister and founding chairman of the city’s first political party said.

He added he does not regret his actions and is proud to walk with Hong Kong’s youngsters in their fight for democracy.

The semi-autonomous city was shaken by widespread and sometimes violent street protests in 2019, sparked by a now-abandoned proposal to allow extraditions to the authoritarian Chinese mainland and its opaque judicial system.

“Today’s arrests of pro-democracy figures in Hong Kong is another nail in the coffin of ‘one country, two systems’,” China director at Human Rights Watch Sophie Richardson said, referring to the principle that guarantees freedoms in the city not seen on the Chinese mainland.

Last year’s rallies morphed into a wider movement calling for greater freedoms in the most concerted challenge to Beijing’s rule since the former British colony returned to Chinese sovereignty in 1997.

The protests and clashes with police have since died down, partly due to exhaustion and arrests but also because of the emergence of the deadly coronavirus.

China’s leaders have refused to accede to the protesters’ demands, which include fully free elections in the city, an inquiry into alleged police misconduct during the protests and an amnesty for more than 7,000 people arrested during the movement — many of them under the age of 20.

“They are doing whatever they can do to try to silence, to take down the local opposition, but then united we stand,” she said. “It’s so obvious they’re choreographing all their acts.”