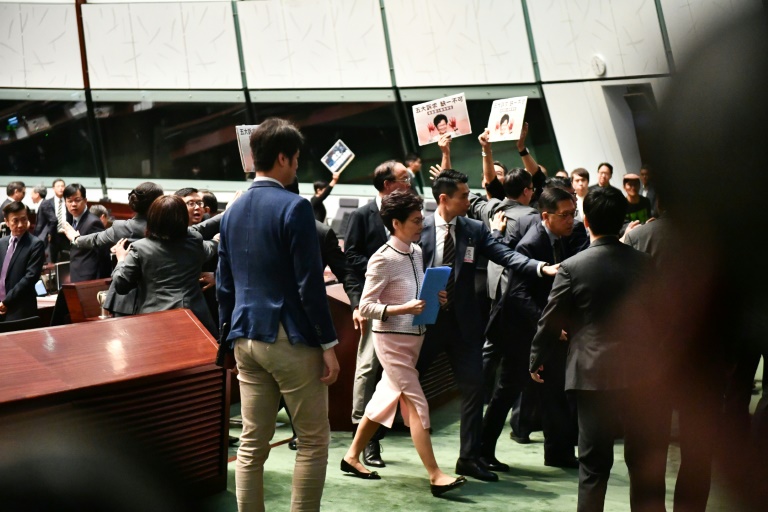 Hong Kong’s embattled leader abandoned a State of the Union-style speech on Wednesday after she was heckled by rowdy opposition lawmakers during chaotic scenes inside the city’s legislature.

The speech by chief executive Carrie Lam was billed as an attempt to win hearts and minds after four months of seething pro-democracy protests.

Instead, it laid bare the intense polarization coursing through the semi-autonomous financial hub after weeks of huge and increasingly violent rallies.

And it was swiftly dismissed by protesters who called for a new rally on Sunday.

Lam, who has historic low approval ratings, tried twice to begin her policy address inside the Legislative Council which had opened for a new session some three months after it was trashed by masked protesters.

But pro-democracy lawmakers, a minority of the pro-Beijing stacked legislature, shouted her down and called for her resignation.

Lam instead released a pre-recorded video, the first time a Hong Kong leader has been unable to deliver the annual address in person since the tradition began in 1948.

In it, she announced plans to increase housing and land supply in a city that has one of the least affordable property markets in the world, as well as various subsidies.

“I firmly believe that Hong Kong will be able to ride out this storm and move on,” she said.

But the announcement gave no concessions to protesters.

“So much has happened on Hong Kong’s streets over the past four months but Lam has been either hiding in her abyss or acting like a wax figure,” pro-democracy lawmaker Tanya Chan told reporters.

“We urge Carrie Lam to stop destroying Hong Kong, respond to the five major demands, and step down,” added the Civil Human Right Front, a non-violent protest group behind a series of huge marches earlier in the summer.

The CHRF said it was applying for a police permit to hold a new march on Sunday. Recent requests by the group have been rejected with more hardcore activists instead holding wildcat protests and quickly clashing with police.

Willy Lam, a politics expert at the Chinese University of Hong Kong, said Lam’s speech would do little to quell protests which are fuelled by years of anger over sliding freedoms and the inability of Hong Kongers to elect their own leaders.

“Carrie Lam is following instructions from Beijing,” he told AFP.

“Even the economic handouts do not seem to be particularly impressive and they take will take a few years to actually materialize.”

Millions have taken to the streets of Hong Kong, initially against a now-dropped bid by its leaders to allow extraditions to the authoritarian Chinese mainland.

But after Beijing and Lam took a hard line, the movement snowballed into a broader push for democracy and police accountability.

Activists say freedoms are being eroded by Beijing, contrary to a deal that outlined Hong Kong’s 1997 return to China from British colonial rule.

Protesters have said they will only end their huge rallies if core demands are met, including an independent inquiry into the police, an amnesty for the more than 2,500 people arrested and universal suffrage.

Both Lam and Beijing have repeatedly dismissed those demands and say Hong Kong’s freedoms are being protected.

Lam’s speech comes after the US House of Representatives passed a bill late Tuesday that aims to defend civil rights in Hong Kong and has drawn rare bipartisan support in a polarized Congress.

China, which has accused “external forces” of fueling weeks of unrest in the city, expressed its “strong indignation” over the bill and told Washington to “stop meddling”.

The Hong Kong Rights and Democracy Act would link the city’s special trading status with the United States to an annual State Department certification that authorities are respecting human rights and the rule of law.

It would also require the US president to identify and sanction the people responsible for the erosion of autonomy and serious abuses of human rights in Hong Kong.

The House also approved a related bill to prohibit the export of certain non-lethal crowd control items such as tear gas to Hong Kong.

Image: AFP / Anthony WALLACE There were chaotic scenes inside Hong Kong’s legislature as the city’s leader tried to deliver a policy address