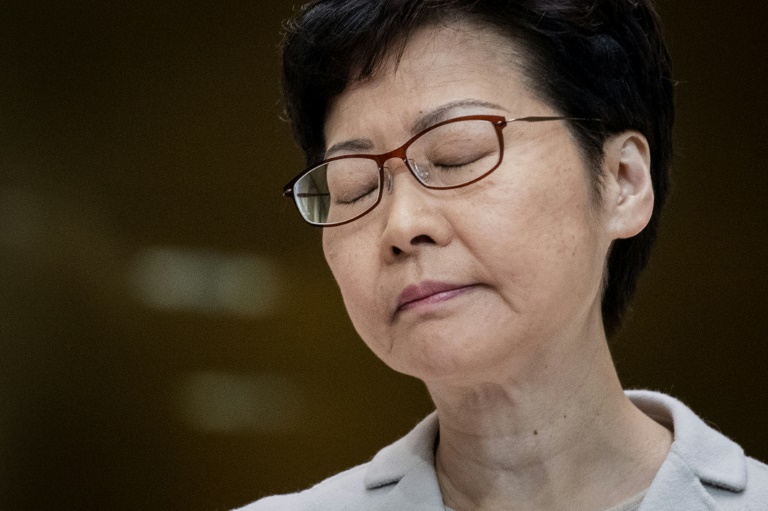 In China, state media sought to downplay and discredit the weekend ballot that delivered a stinging rebuke to the financial hub’s pro-Beijing establishment in what was widely seen as a referendum on Lam’s handling of the unrest.

The city’s chief executive pledged to “improve governance” in the wake of the district council elections, which she acknowledged revealed concern over “deficiencies in the government, including unhappiness with the time taken to deal with the current unstable environment.”

In a rout that stunned the semi-autonomous territory, candidates campaigning against greater control by China seized an overwhelming majority of 452 elected seats in the city’s 18 district councils, bodies that have historically been firmly in the grip of a Beijing-aligned establishment.

The result — the first vote held since protests engulfed the city — was a humiliating rebuke to Beijing and Lam, who has dismissed calls for political reform and repeatedly suggested that a silent majority supported her administration.

In the wake of the polls, pro-democracy politicians have stepped up calls for Lam to address the movement’s key demands — such as direct popular elections for the city’s leadership and legislature, and a probe into alleged police brutality against demonstrators.

But in Tuesday’s weekly press briefing, she sidestepped those calls, denouncing the street violence and repeating an earlier pledge to open a dialogue on the unrest, a proposal that opponents have dismissed as too little, too late.

Millions of Hong Kongers took to the streets earlier this year after Lam’s government introduced a bill to allow extraditions to China’s opaque judicial system.

Although it was eventually withdrawn under public pressure, the bill added fuel to growing fears that Beijing was tightening its grip on the city, unleashing broader public demands for reform and leading to violent clashes between police and protesters.

The public support for change indicated by the election result appeared to pour cold water on repeated claims by the chief executive and China’s government that the protests were the work of a violent radical fringe.

Lam’s latest comments indicated “no reflection, no response and no resolution” for Hong Kong’s ongoing crisis, said Lam Cheuk-ting, a lawmaker and leading figure in the Democratic Party, the city’s largest anti-establishment party.

“While the pro-establishment camp was finally awakened by votes, Lam still chooses to remain asleep, as deeply as in a coma,” he said.

China’s state media, however, cast doubt on the vote’s legitimacy, focusing on violence that marred campaigning.

The People’s Daily said “social unrest… has seriously disrupted the electoral process,” with an editorial in the English-language version of the China Daily said it was “skewed by intimidation” and “dirty tricks” that hurt pro-establishment candidates.

“External forces that have helped stoke the months-long anti-government campaign in (Hong Kong) also contributed greatly to damaging the election chances of pro-establishment candidates,” it said.

The result revived speculation that Lam might be dumped by Beijing, but a Chinese foreign ministry spokesman on Monday reiterated the government’s backing.

Questioned over whether China’s leaders had asked her to take responsibility for the rout, Lam said she had received such no communications from Beijing.

She also repeated calls for a small number of protesters holed up in a university campus surrounded by police for more than a week to come out peaceably.

Image: AFP / NICOLAS ASFOURI The result — the first vote held since protests engulfed the city — was a humiliating rebuke to Beijing and Lam