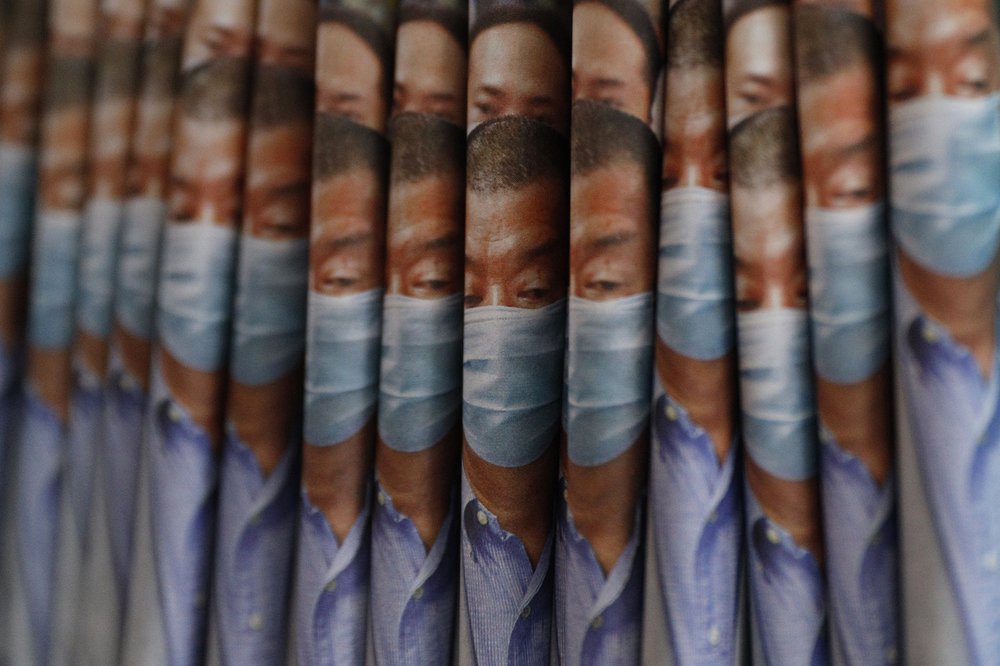 HONG KONG (AP) — Last year, hundreds of thousands of people took to the streets of Hong Kong to demand full democracy, many egged on by a tabloid newspaper critical of China’s ruling Communist Party.

On Tuesday, they lined up at newsstands across the city to buy that same paper, handing over 10 Hong Kong dollars ($1.25) a copy in a bid to help the Apple Daily — and press freedom — survive.

The public show of support came a day after police rounded up 10 people, including the paper’s founder, and raided its headquarters. The move reinforced fears that a new national security law would be used to suppress dissent in Hong Kong after months of anti-government protests shook the city’s leadership and the central government in Beijing last year.

Police have expanded their use of the law since it took effect six weeks ago, first arresting protesters with slogans deemed to be in violation and then activists over online posts. Media tycoon Jimmy Lai, the Apple Daily founder, and his Next Digital media group were the largest targets to date.

That people protested by buying a newspaper rather than by taking to the streets shows how much the climate has changed since the stormy protests last year. People also bought Next Digital stock to show support, driving its price up more than 300% on Tuesday,

The Apple Daily, known for its celebrity coverage as well as its condemnation of China’s authoritarian rule, remained defiant, printing 350,000 copies — five times its usual print run — after police investigators left Next Digital and told employees they could go back to work.

Lines formed at newsstands Tuesday in a public show of support, and Apple Daily said it would print an additional 200,000 copies. “Apple Daily will fight on,” the newspaper said on its front page.

“I do not like the way Apple Daily reports news but I think it symbolizes press freedom in Hong Kong,” Tiffany Chan said after buying a copy at a convenience store. “I cannot just sit and watch the government destroy press freedom. This is the least I can do.”

One newsstand operator said he had sold 200 of his allotment of about 300 papers by late morning. On a typical day, he sells about 100 copies, he said.

Hong Kong, and to a lesser degree Taiwan, have become battlegrounds for the competing world views of China and the United States. The US imposed sanctions on 11 Hong Kong and Chinese officials last week, including city leader Carrie Lam, over the security law. China responded Monday by sanctioning 11 Americans, including six members of Congress.

The Trump administration, which is feuding with China on multiple fronts, sent Health and Human Services Secretary Alex Azar to Taiwan this week for the highest-level visit by a US official since the United States broke off diplomatic relations to recognize Beijing as the government of China in 1979.

Taiwan Foreign Minister Joseph Wu, meeting Azar on Tuesday, said the self-governing island is fortunate to have US support at a time when “our life has become increasingly difficult as China continues to pressure Taiwan into accepting its political conditions, conditions that will turn Taiwan into the next Hong Kong.”

The fate of Hong Kong’s 7.5 million residents ultimately lies in the hands of the Communist Party leadership in Beijing.

“You can’t really worry about it, it is what it is,” said Anna Yuen, a retiree who said her family could leave if the situation really deteriorates. “But I can’t bear to leave Hong Kong. I think Hong Kong people are really admirable, especially the youth.”

The fear in Hong Kong, which has its own laws and courts and greater freedoms than mainland China, is that the Communist Party wants to mold the territory over time into a city similar to those on the mainland.

Press freedom is just one characteristic that separates Hong Kong from the rest of China.

“If they crack down on Apple Daily today, they will go down the list of media that do not support the Communist Party or the Hong Kong government, and what will be left is just news that sings the praises of the Communist Party,” Chan said.

By ZEN SOO and KEN MORITSUGU