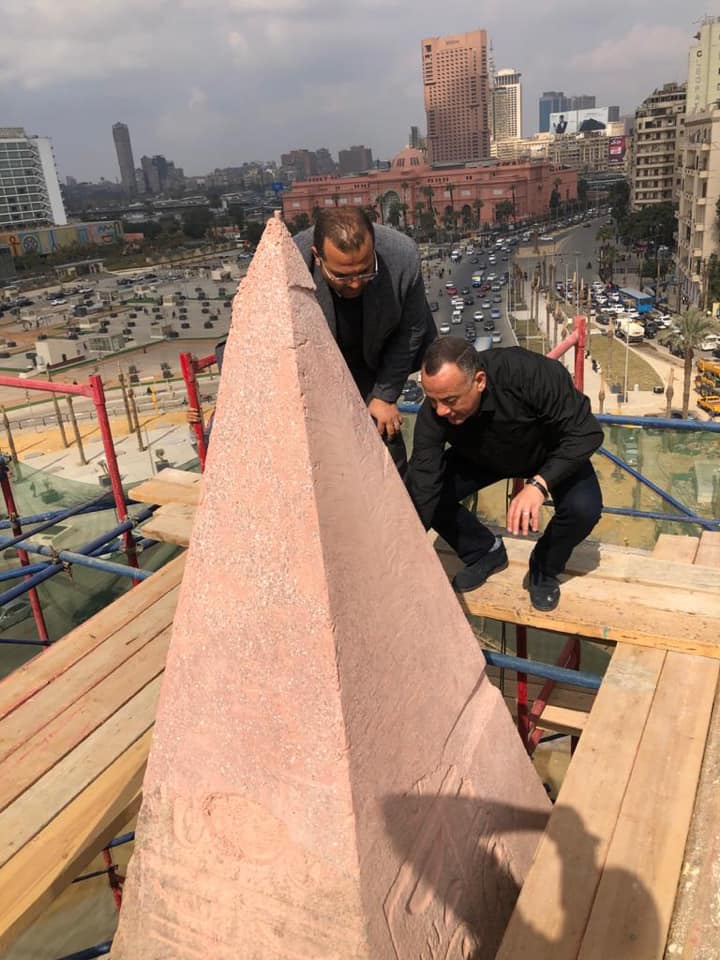 A Ramses II statue, parts of which were unearthed in Egypt last August, has been successfully reassembled and installed at the heart of downtown Cairo’s busy Tahrir Square, said Secretary-General of the Supreme Council of Antiquities Mostafa Waziri on Sunday, during a tour to inspect ongoing restoration work in the square.

The statue of Ramses II was then topped with the shape of a pyramid, similar to an obelisk, which bears the title of Egypt’s most iconic ancient king.

After the substructure was mounted, the rest of the statue was installed over the past few weeks after being refurbished and having its eight blocks reattached. Currently standing at a height of nearly 17, the King Ramses II statue weighs an impressive 90 tons and is made of pink granite, according to previous statements from Egypt’s Minister of Tourism and Antiquities Khaled al-Anani.

The step came as part of government efforts to revamp the iconic square and draw attention to Egypt’s rich ancient history, with Egypt’s Ministry of Antiquities having transported eight blocks of the statue unearthed in August 2019 at Zagazig, a city in Lower Egypt. The monument in its entirety was set to be showcased in the square after undergoing a restoration process.

Four sphinx statues from the Upper Egyptian city of Luxor’s Karnak Temple are also set to be displayed in the revamped Tahrir Square, in addition to the transfer of an obelisk from the same area.

Hariry pointed to the 7th article of the Venice Charter for the Conservation and Restoration of Monuments and Sites, which serves as the main reference for the UNESCO World Heritage Convention issued in 1974 and signed by Egypt.

The charter states that it is not permissible to move a monument or any part of it except for the purpose of preservation, according to Hariry, who argued that the removal of an authentic part of the archaeological site in Luxor was in violation of norms set by the international community.

Meanwhile, Egypt’s Minister of Tourism and Antiquities Khaled al-Anani claims that there was no danger in transporting the monument, explaining that the process took place under tight security that ensured the safety of the statues parts.

“We will not place a single brick in any location in Egypt if there is any risk in doing so. We are the protectors of the ancient Egyptian civilization and we won’t expose (artifacts) to any danger,” he asserted previously.