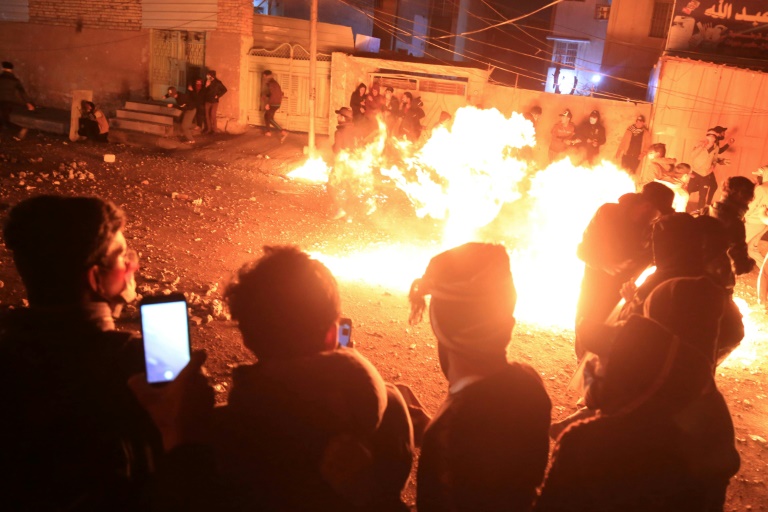 Iraqis kept up anti-government protests in Baghdad and the south on Saturday, unsatisfied with the premier’s vowed resignation and insisting on the overhaul of a system they say is corrupt and beholden to foreign powers.

Protesters have hit the streets since early October in the largest grassroots movement Iraq has seen in decades, sparked by fury at poor public services, lack of jobs and endemic government graft.

The decentralized demonstrations were met with violence from security forces and armed groups, leaving more than 420 people dead and 15,000 wounded according to an AFP tally compiled from medics and an Iraqi rights commission.

The toll spiked dramatically this week, when a crackdown by security forces left dozens dead in Baghdad, the Shiite shrine city of Najaf and the southern hotspot of Nasiriyah — the birthplace of Prime Minister Adel Abdel Mahdi.

Facing pressure from the street and the country’s top Shiite cleric Grand Ayatollah Ali Sistani, Abdel Mahdi announced on Friday that he would submit his resignation to parliament, due to meet on Sunday.

But demonstrations have not subsided, with crowds in the capital and across the Shiite-majority south sticking to their weeks-long demand of complete regime change.

“We’ll keep up this movement,” said one protester in the southern hotspot of Diwaniyah, where thousands turned out early on Saturday.

“Abdel Mahdi’s resignation is only the first step, and now all corrupt figures must be removed and judged,” he said.

Hundreds converged in the main protest camp in Nasiriyah’s city center and set tyres ablaze on three bridges spanning the Euphrates River, according to AFP’s correspondent.

Iraq’s second holy city Karbala was rocked by overnight clashes with young protesters and security forces trading fire bombs until the early hours of the morning.

Najaf was relatively calm on Saturday, according to AFP’s correspondent, but protests there usually swell in the afternoon and evening.

This week’s stunning turnaround was set off when protesters stormed and burned the Iranian consulate in Najaf late Wednesday, accusing Iraq’s neighbor of propping up the Baghdad government.

Men in civilian clothes opened fire on demonstrators and tribal fighters deployed in the streets to defend them in standoffs that sparked fears of open clashes.

Over two days, 42 people were shot dead in Nasiriyah, 22 in Najaf and three in Baghdad.

Iraq’s Supreme Judicial Council announced Saturday it had formed a committee to investigate the events, pledging to “punish those who attacked protesters”.

The chief justice, Faeq Zeidan, is among a list of names circulated as possible replacements for Abdel Mahdi.

The rising death toll sparked a dramatic intervention from Sistani, the 89-year-old spiritual leader of many of Iraq’s Shiites.

He had called for restraint and urged parties to get “serious” about reform for weeks but ramped up his rhetoric on Friday, calling on parliament to drop its support for the government.

Within minutes, leading political factions called for a vote of no-confidence, including one of the government’s key sponsors, the Saeroon parliamentary bloc led by firebrand cleric Moqtada Sadr.

Abdel Mahdi’s other main backer, the Fatah bloc, called for “the necessary changes in the interests of Iraq” in a departure from its usual statements of support for him.

By Friday afternoon, Abdel Mahdi announced he would submit a formal letter to parliament “requesting my resignation” in keeping with Sistani’s wishes.

The 77-year-old premier did not give further details but parliament is due to meet on Sunday.

If it passes a no-confidence vote, the cabinet would remain in place as caretakers until the president names a new premier.

Iraq’s constitution, drafted in 2005, does not include a provision for the resignation of the premier, so submitting a letter to parliament would trigger a no-confidence vote.

The bloodshed this week sparked criticism from the United Nations, which said the deaths “cannot be tolerated.”

The US called on leaders to address “protesters’ legitimate concerns”, but did not comment directly on the premier’s planned resignation.