Earlier this week, hundreds of Moroccans protested the death of Yassine Lekhmidi, a 25-year-old man in the city of Sidi Bennour.

In July, local police confiscated a food cart Lekhmidi was driving because he wasn’t wearing a face mask to protect against COVID-19. Despite paying a fine for the infraction, police refused to return his cart.

Distraught over the loss of an important source of income for his family, Lekhmidi set himself on fire. The young man was hospitalized with third-degree burns on July 28 and died of his injuries on August 6.

Over the past week, hundreds of locals in Sidi Bennour have taken to the streets to demand justice for Lekhmidi and his family. Moroccans elsewhere in the country were cautiously sympathetic to the cause.

“I think the citizens have the right to protest but they should do it legally,” Imad, a 27-year-old student from Rabat, told DW.

“There have been a few protests here recently. It’s the negative impact of the coronavirus,” added Abdullah, a 40-year-old clothing retailer from Salé. “The way I see it, that’s normal. People have a right to call for social justice.” 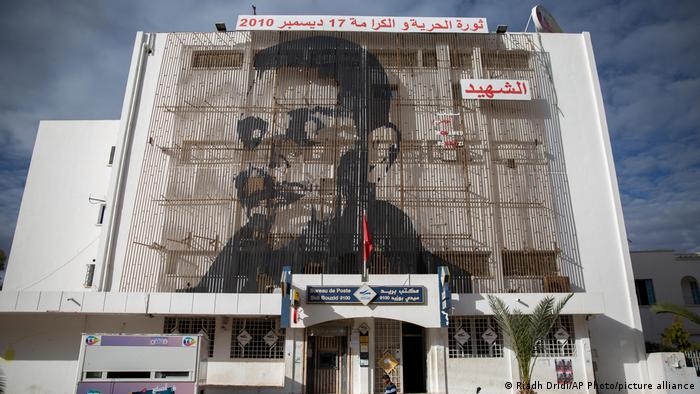 Return of the Arab Spring?

The protests in Sidi Bennour have subsided over the past few days. Still, international observers quickly wondered whether Lekhmidi’s death might spark wider protests, with many drawing parallels between his self-immolation and that of Mohamed Bouazizi.

A Tunisian street vendor, Bouazizi’s 2010 death in similar circumstances is widely believed to have ignited popular revolution against Tunisia’s dictatorship in 2011, which in turn inspired the so-called Arab Spring protests.

But in fact, Lekhmidi’s death is not the first such case in Morocco to have sparked anti-government protests. Over the past decade, there have actually been several incidents in which injustice after a brush with authorities brought Moroccans to the streets.

That includes 2012, when five unemployed university graduates set themselves on fire outside a Ministry of Education building during anti-government protests in the capital Rabat. One person died in the incident.

In 2017, thousands of Moroccans protested the deaths of two brothers trapped in an abandoned coal mine in the town of Jerada. The unemployed men had been extracting coal from the dangerous mines then selling it to local “coal barons,” some of whom held government positions. 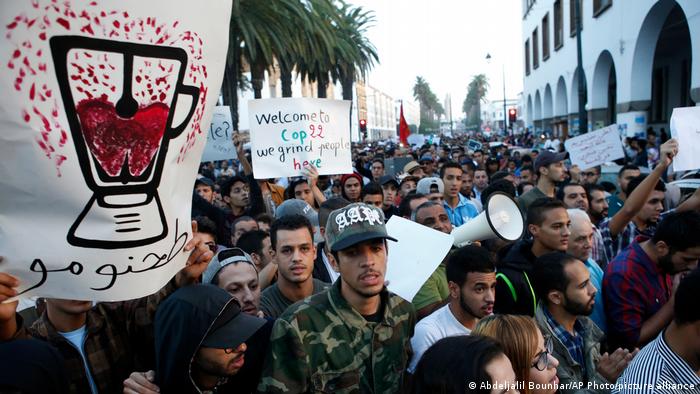 Possibly the best known — and most gruesome — event occurred in 2016, when police confiscated several tons of swordfish from a fishmonger, Mouhcine Fikri, in the coastal town of Hoceima.

Desperate to get his valuable wares back, Fikri jumped into the back of a garbage truck the fish had been thrown into.

Although local authorities later denied it, a government official reportedly told the operator of the truck to “grind him.” Fikri was crushed to death in the back of the vehicle while officials stood by.

In the days that followed, thousands of locals demonstrated for justice for Fikri and his death is thought to have started the local Hirak al-Shaʿbi protest movement in Morocco’s marginalized Rif region.

The thing these incidents have in common is “hogra,” which is defined as “a feeling of being the object of contempt, structural injustice and humiliation,” associated with “state officials who make life unlivable,” explains the Arab Studies Institute, a US-based think tank, in an online lexicon defining terms coming out of protest movements in North Africa. 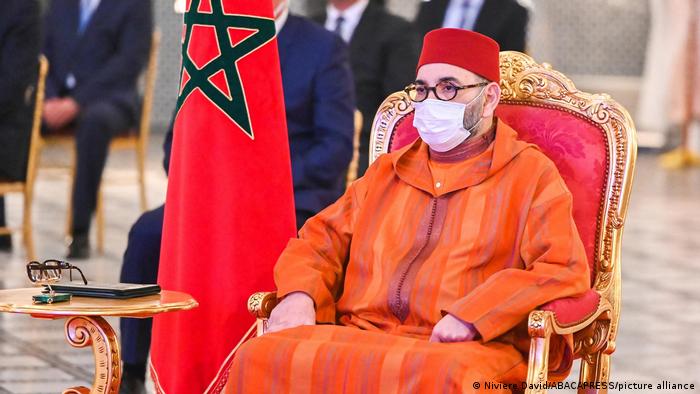 Morocco has an elected parliament and is a constitutional monarchy. But in reality, it is King Mohammed VI, who’s been on the throne for over 22 years now, who wields most political and economic power.

In the recent past, the country’s authorities have been quick to deal with anti-government protests and strikes. They allow some demonstrations to go ahead but react quickly to serious challenges. For example, in the case of the ill-fated fishmonger, the king promised an investigation. Within days, several alleged perpetrators had been arrested.

But then, in other situations, dissenting voices, investigative journalists and protesters are policed, sometimes harshly. For instance, in late 2017, following outrage over the fishmonger’s death, a law was passed that enabled Moroccan authorities to more ruthlessly suppress the Hirak al-Shaʿbi movement.

That is part of the reason related protests remain isolated in Morocco and have failed to grow into any kind of nationwide revolutionary moment according to locals.

“When you have a security system like this, it’s really hard to go on the street to protest or make demands,” a civil society activist in Rabat — who requested anonymity for fear of retribution — told DW. “Everybody knows somebody working in the security apparatus. It’s so widespread and so large. That really discourages people from going out on the streets.”

Additionally, the opposition is splintered. “It’s always difficult to know when a protest movement will escalate — or go nowhere,” said Jacob Mundy, a visiting fellow at the European Council on Foreign Relations and associate professor focusing on the Middle East and Maghreb at Colgate University in New York. “The last major wave of protests in Morocco became entangled in separatist ethnic issues in the north of the country, a politics that most Moroccans don’t share. If the protests in Morocco become widespread throughout the country, then that could be a sign that something is different this time.”

It has been suggested that the COVID-19 pandemic might be making that difference, as the health crisis is putting pressure on what observers describe as Morocco’s “benevolent authoritarianism narrative.” 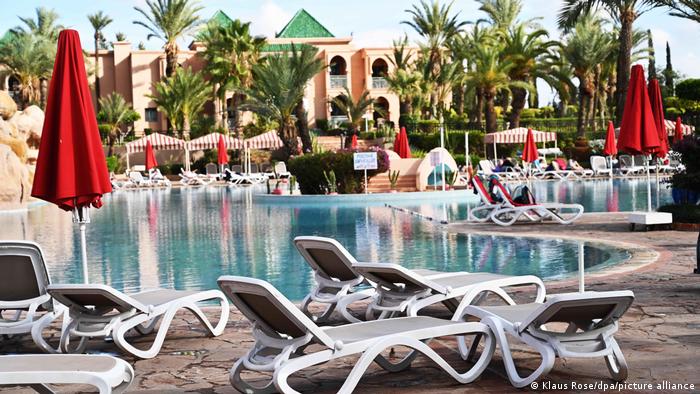 In 2018, Morocco had the highest income inequality in North Africa

Lockdowns, a lack of tourism and the resulting impact on the economy has widened pre-existing income inequalities, which, according to a 2018 report by the OECD, were already worse in Morocco than in any other North African nation.

As social pressure has built inside the country, locals say there has also been more suppression of dissenting opinion. They tout recent revelations about the Moroccan government’s use of the digital spyware Pegasus to target human rights lawyers and journalists as proof, as well as the arrest of independent journalists often on unrelated and disputed charges.

Morocco on a ‘slippery slope from bad to worse’

“The effects of the coronavirus pandemic risk diminishing the monarchy’s capacity to subdue the population and limit political dissent … politically, the health crisis has reinforced the regime’s authoritarianism,” experts at the Carnegie Endowment for International Peace confirmed in a July 2020 commentary. 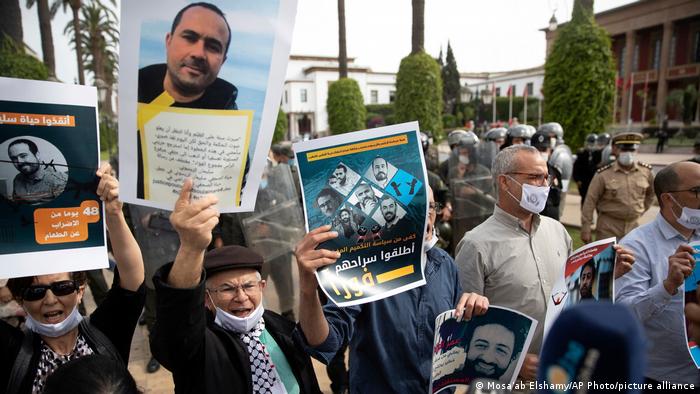 Moroccans protest against the incarceration of two journalists in 2021

“Even two years ago doing an interview like this would not have been a problem,” the Rabat activist concluded, “but now it’s much harder to voice demands, no matter who you are.”

“A lot of people here work in the informal economy or day-to-day, as laborers,” the activist told DW. “The pandemic has shut all that down. So it’s harder and harder for people to make a living. For the first time ever, I heard about people going hungry in some of Morocco’s bigger cities. And then there also seem to be systematic attempts not to let people speak about it openly. It feels like we are on a slippery slope,” the activist concluded, “and going from bad to worse.”