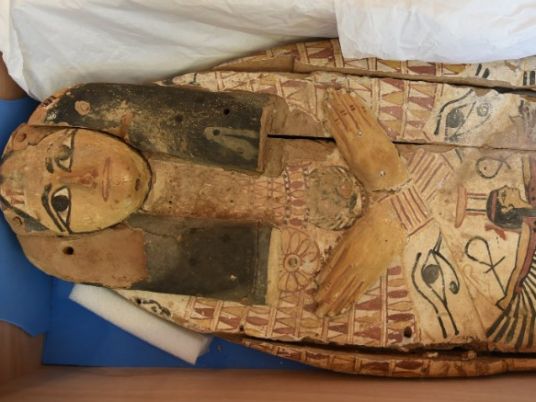 The paint has long since faded, but even some 3,000 years later the Egyptian sarcophagus covers radiate history and beauty. Now, the wooden covers from the times of pharaohs are home.

Israel returned two sarcophagus covers to Egypt on Sunday in a sign of warming ties between the two countries, the Israeli Ministry of Foreign Affairs said.
Each plaster-covered lid is in two pieces. One dates between 1600 to 1300 B.C., the other from 900 to 700 B.C. The lids are works of art in their own right, painted with faces and intricate decorations on the body.
The Israel Antiquities Authority kept the sarcophagus covers in climate-controlled storage. The lids were smuggled into Israel from another country at an unspecified time, according to the Ministry of Foreign Affairs. The Israel Antiquities Authority seized them four years ago, though it was not clear if they had been in Israel long before then.
Because of their age and fragile condition, the authority kept them in climate-controlled storage. After clearing several bureaucratic procedures, the sarcophagus lids were handed over to Egyptian Ambassador Hazem Khairat at Israel's Ministry of Foreign Affairs.
Dore Gold, director-general of the Ministry of Foreign Affairs, said he hoped the return of the artifacts would lead to further bilateral cooperation between the countries.
Following Egyptian President Hosni Mubarak's ouster in 2011, many Egyptians had called on their government to end diplomatic relations with Israel. Egypt and Israel signed a peace agreement in 1979.