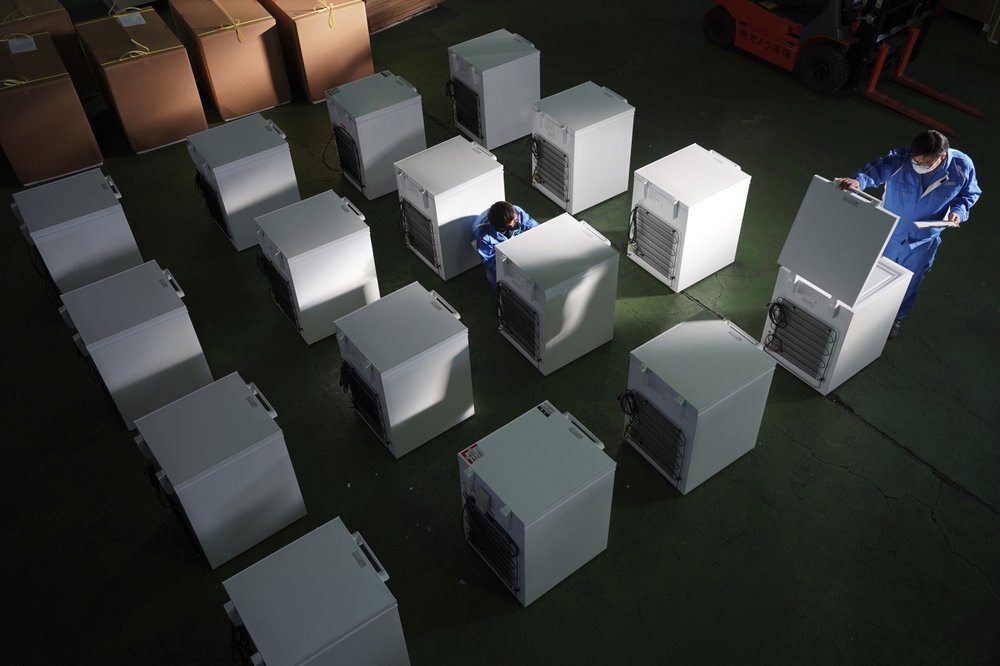 TOKYO (AP) — Japan is publicly adamant that it will stage its postponed Olympics this summer. But to pull it off, many believe the vaccination of its 127 million citizens for the coronavirus is key.

It’s an immense undertaking in the best of circumstances and complicated now by an overly cautious decision-making process, bureaucratic roadblocks and a public that has long been deeply wary of vaccines.

Japan hopes to start COVID-19 vaccinations in late February, but uncertainty is growing that a nation ranked among the world’s lowest in vaccine confidence can pull off the massive, $14 billion project in time for the games in July, casting doubt on whether the Tokyo Olympics can happen.

Japan has secured vaccines for all its citizens, and then some, after striking deals with three foreign pharmaceutical makers — Pfizer Inc., AstraZeneca and Moderna Inc. Its swift action was seen as proof of its resolve to stage the games after a one-year postponement because of the pandemic.

The country needs foreign-made vaccines because local development is only in its early stages.

Prime Minister Yoshihide Suga, in a speech this week, said vaccines are “the clincher” in the fight against the pandemic and vowed to start vaccinations as soon as late February, when health ministry approval of the Pfizer vaccine, the first applicant, is expected.

Suga pledged to provide “accurate information based on scientific findings, including side effects and efficacy,” an attempt to address the worries of vaccine skeptics.

Under the current plan, inoculations will start with 10,000 front-line medical workers. Then about three million other medical workers will be added ahead of high-risk groups such as the elderly, those with underlying health conditions and caregivers. The rest of the population is expected to get access around May or later, though officials refuse to give an exact timeline.

Japan is under a partial state of emergency and struggling with an upsurge of infections. There have been about 351,000 cases, with 4,800 deaths, according to the health ministry.

Many people are skeptical of the vaccination effort, partly because side effects of vaccines have often been played up here. A recent survey on TBS television found only 48 percent of respondents said they wanted a COVID-19 vaccination. In a Lancet study of 149 countries published in September, Japan ranked among the lowest in vaccine confidence, with less than 25 percent of people agreeing on vaccine safety, importance and effectiveness.

Many Japanese have a vague unease about vaccines, said Dr. Takashi Nakano, a Kawasaki Medical School professor and vaccine expert. “If something (negative) happens after inoculation, people tend to think it’s because of the vaccine, and that’s the image stuck in their mind for a long time.”

The history of vaccine mistrust in Japan dates back to 1948, when dozens of babies died after getting a faulty diphtheria vaccine. In 1989, cases of aseptic meningitis in children who received a combined vaccination for measles, mumps and rubella, or MMR, prompted lawsuits against the government, forcing it to scrap the mix four years later.

A 1992 court ruling held the government liable for adverse reactions linked to several vaccines, while defining suspected side effects as adverse events, but without sufficient scientific evidence, experts say. In a major change to its policy, Japan in 1994 revised its vaccination law to scrap mandatory inoculation.

While several Japanese companies and research organizations are currently developing their own coronavirus vaccines, Takeda Pharmaceutical Co. will distribute the Moderna vaccine and produce the Novavax vaccine in Japan.

Masayuki Imagawa, head of Takeda’s Japan vaccine business unit, said his company last year considered developing its own vaccine. But instead it decided to prioritize speed and chose to import Moderna’s product and make the Novavax vaccine at Takeda’s factory in Japan. He said the decision was not influenced by the Olympics.

Experts also worry about running into logistical challenges and bureaucratic roadblocks in staging a massive inoculation project that involves five government ministries along with local towns and cities. The government has budgeted more than 1.5 trillion yen ($14 billion) for the vaccine project.

Thousands of medical workers would have to be mobilized to give the shots, monitor and respond in case of any problems. Securing their help is difficult when hospitals are already burdened with treatment of COVID-19 patients, said Hitoshi Iwase, an official in Tokyo’s Sumida district tasked with preparing vaccinations for 275,000 residents.

While vaccines are considered key to achieving the games, Prime Minister Suga said they won’t be required.

“We will prepare for a safe and secure Olympics without making vaccination a precondition,” Suga said Thursday, responding to a call by opposition lawmakers for a further postponement or cancellation of the games to concentrate on virus measures.

Uncertainty over vaccine safety and efficacy make it difficult to predict when Japan can obtain wide enough immunity to the coronavirus to control the pandemic.

“It is inappropriate to push vaccinations to hold the Olympics,” said Dr. Tetsuo Nakayama, a professor at Kitasato Institute for Life Sciences. “Vaccines should be used to protect the people’s health, not to achieve the Olympics.”

Upcoming decision on Japan virus measures derided as 'too little, too late'