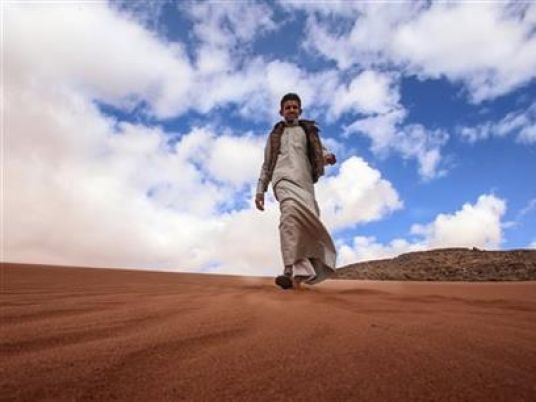 Jordan's "Theeb" has been nominated in the Best Foreign Language Film category at this year's Academy Awards, a first for the nation's film industry.

Jordan is not the only one making history in this year's Oscars race. Latin America, represented by Chile, also makes history with its first nomination as an animated short film.

The Jordanian film is about an orphaned Bedouin boy Theeb and his brother Hussein who live together in Hejaz province during WWI. The story begins when a British officer asks the Bedouins for a guide through the desert to the Ottoman train tracks.
The Bedouins recommend Hussein to the British officer, and Theeb follows his brother without his knowledge. Hussein is killed during a battle that pits Arab revolutionaries against Ottoman mercenaries and Bedouins. After witnessing his brother's death, Theeb decides to seek revenge.
"Theeb" is competing against four other nominees in the foreign language film race, including the Colombian film "Embrace of the Serpent", the Hungarian film "Son of Saul", the Danish film "A War" and the French film "Mustang".
Directed by Naji Abu Nowar, "Theeb" is Jordan's second submission in the famed Oscars race. The film won the Best Director award at the Venice International Film Festival and was also nominated for two other awards at the British Academy of Film and Television Arts (BAFTA) awards.
Abu Nowar, born to an English mother and a Jordanian father, was named 2014’s best Arab director by Variety magazine. His first cinematic experiment was in 2009 with his short film, "Death of a Boxer", which screened at several international festivals.
In “Theeb,” Abu Nowar navigates through the charming environment of the Jordanian desert, specifically Wadi Rum, going back to 1916 when the battle was heating up between the Ottoman Empire and Great Britain.
The film's nomination was hailed by cinema critics and Jordan’s Queen Rania Al Abudallah tweeted a “congratulations for Theeb’s nomination in the Oscars. I hope it wins”.

“It has been an overwhelming and joyous experience for the whole team. We are all very happy and the journey continues,” Abu Nowar told Al Arabiya News.
Chile's animated short film "Bear Story" was also nominated for an Oscar, marking a milestone in the history of Latin American cinema as the first animated short to receive an Academy Award nomination.
The Chilean film was directed by Gabriel Osorio, written by Daniel Castro and produced by Punkrobot Studio. It narrates the story of a kidnapped bear who is separated from his family and forced to join the circus.
The movie is based on the dictatorship of the Chilean military and was also inspired by the director’s grandfather-in-exile.
“I was inspired by my family history that has to do with the exile of my grandfather. He spent two years in prison after the military coup and then was exiled in 1975," said Osorio. "I grew up without knowing my grandfather and that gives me a starting point, an inspiration to address the issue of what happens when a family is separated."
The ten-minute film will compete against "Prologue", "We Can’t Live without Cosmos", "World of Tomorrow" and Sanjay’s "Super Team".