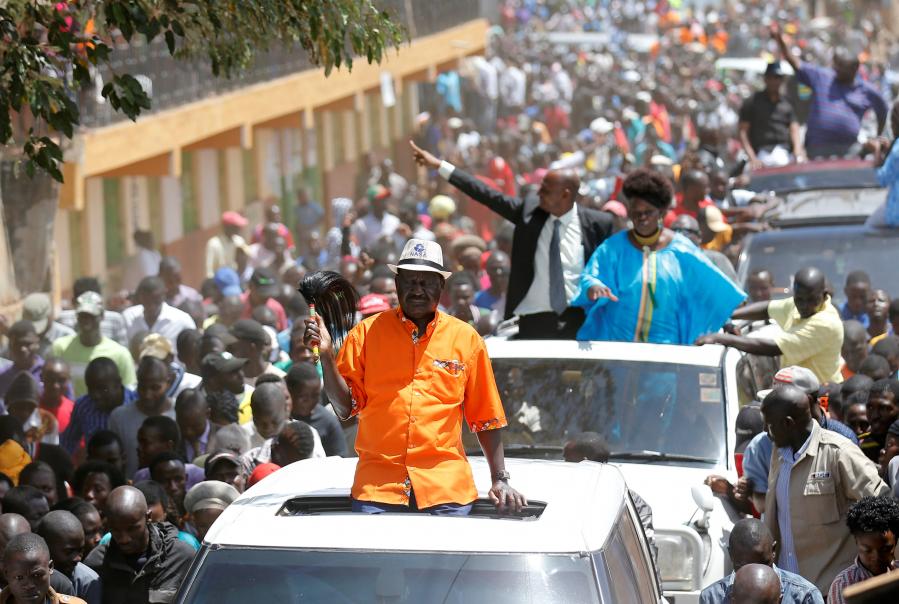 Kenyan opposition leader Raila Odinga called for calm on Sunday as he visited a slum in the capital that was hit by violence when a political stand-off over a repeat presidential election fed into rising ethnic tensions.

Clashes in Kawangware and in a village in western Kenya following Thursday’s vote were the first signs that face-offs between Odinga supporters and the police might eventually morph into neighbors turning against each other.

“A country cannot be ruled by the gun. Standing here in this church we want to condemn the militarization of politics in this country,” Odinga told residents in the Nairobi slum.

The veteran opposition leader had boycotted the re-run of an August presidential election that was nullified by Kenya’s Supreme Court on procedural grounds, leaving President Uhuru Kenyatta with an almost free run against six minor candidates.

On Friday, a day after the repeat vote was held in most of the country, ethnic violence in Kawangware saw dozens of homes and shops torched and one man killed. Most of buildings torched belonged to residents from the Kenyatta’s Kikuyu tribe.

One man from Odinga’s Luo group was killed overnight near Koguta village in the west of the country, after residents from two ethnic groups backing different candidates armed themselves.

If such isolated incidents become a trend, it could ignite large swathes of Kenya, as happened after a 2007 presidential election when weeks of violence left 1,200 dead. That sent ripples throughout East Africa, which relies on Kenya as a trade and diplomatic hub.

In his speech, Odinga condemned violence generally and did not single out any particular attack.

“We have come here to give consolation to those who were beaten and killed. We as NASA condemn what happened,” he told worshippers at a church in Kawangware, referring to his National Super Alliance, an opposition coalition.

Odinga boycotted Thursday’s vote because he said the contest would not be fair. Instead, he wanted the Oct. 26 contest dismissed and fresh elections held within 90 days.

His withdrawal means Kenyans are watching the turnout, rather than the result, for an indication of Kenyatta’s popularity for a second, five-year term.

Results published on Sunday by the election commission showed that Kenyatta had won slightly more than 98 percent of the vote with results in from 244 out of 291 constituencies.

Turnout for the constituencies counted so far was 43 percent. That figure is likely to decrease when it includes returns of 0 from least 23 constituencies where authorities were unable to open even a single polling station because of protests by Odinga’s supporters.

The election board planned to try to hold elections there on Saturday, but postponed the plan amid fears of further violence.