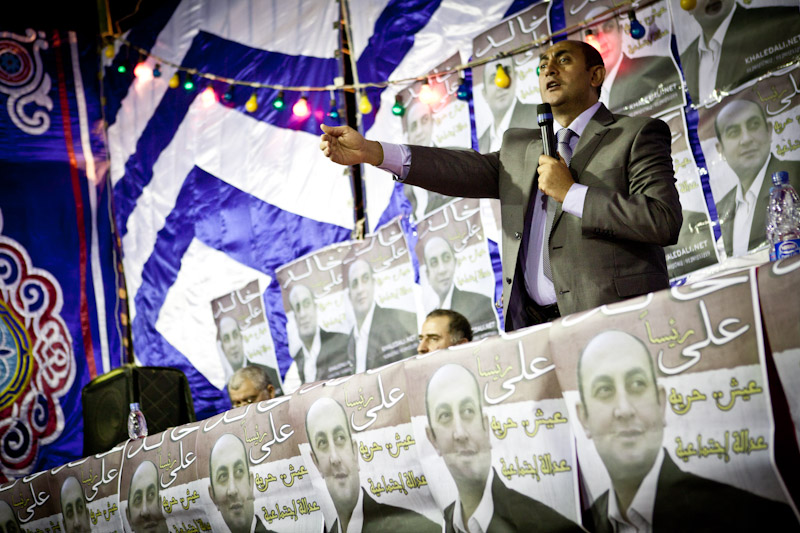 Presidential candidate Khaled Ali on Monday denounced the complementary constitutional declaration to be issued by Egypt's military rulers to define the role of the president and his powers in relationship to the powers of Parliament and the armed forces.

Media outlets had reported that the Supreme Council of the Armed Forces would issue a complementary constitutional declaration that stipulates the powers of the incoming president.

Last week, seven political parties met at the Wafd Party headquarters to discuss the complementary declaration. They decided to propose certain amendments to the 1971 Constitution to be included in it.

Ali suspected the proclaimed objectives of the declaration, and argued that the SCAF is aiming to secure their powers after a president is elected and to escape accountability.

“There is a power struggle and the SCAF generals want to protect themselves and their interests, and not that of the army as a whole,” said Ali in a press conference at his campaign headquarters on Monday.

“We are ready to protect our army and we want it to be powerful, but the army is one thing and the SCAF is another.”

Ali claimed that the current constitutional declaration is enough because it states that the current SCAF powers should be transferred to the president and Parliament once they are elected.

He compared the anticipated declaration to an earlier controversial supra-constitutional document proposed by the former deputy Prime Minister Ali al-Selmy which was rejected by most political forces.

The young candidate added that it’s unconstitutional for the SCAF to issue such a declaration and warned against its dangers.

“This will lead to a civil war because with these extra articles the SCAF will create a state inside the state,” he said.

Three other candidates, Abdel Moneim Abouel Fotouh, Abul Ezz al-Hariry and Hesham al-Bastawisi, reportedly planned to appear at the presser, did not attend. Ali explained that they had other obligations to attend to, but that they share the same sentiments.