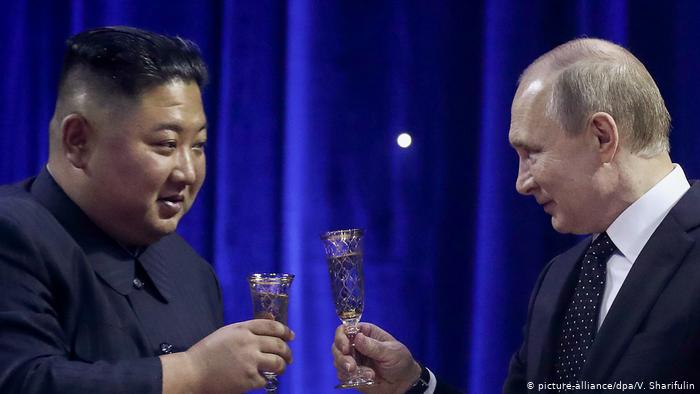 North Korean leader Kim Jong Un said goodbye to Russian President Vladimir Putin on Thursday after talks about regional peace and stability which he said were “candid and meaningful.”

The pair shook hands outside the venue of their meeting in Vladivostok, after holding talks that were rounded off with a reception toast.

“Ceaselessly bolstering and developing strategic and traditional relations between North Korea and Russia… is my and my government’s firm and unwavering position,” Kim said.

While meeting Putin a day earlier, Kim said the eyes of the world were glued to the developments on the Korean peninsula.

In turn, Russia’s president had said his country was backing Kim’s effort to normalize its relations with the US and South Korea.

Observers believed the two leaders would also discuss some 10,000 North Korean laborers who are currently working in Russia and are due to leave the country by the end of the year due to international sanctions against Pyongyang. The workers are an important source of foreign currency for the impoverished Asian country. Kim is likely to also ask Russia for more economic aid.

The Thursday meeting was the first ever face-to-face meeting between the two leaders and Kim’s first official visit to Russia. It came some two months after much anticipated talks with US President Donald Trump broke down in Vietnam.

Kim had arrived in the Russian border town of Hasan in his armored train on Wednesday before continuing his journey to Russia’s far eastern city of Vladivostok. He and Putin are meeting at the university campus on the city’s Russky Island.

Russia said it was unlikely both sides would issue a joint statement or sign any documents after the summit, but Putin is expected to address journalists after the Thursday talks. Kim is scheduled to leave Vladivostok on Friday. Parallel to Kim’s visit to Russia, Pyongyang slammed the ongoing US-South Korean airforce drills and threatened a “corresponding response.”

While North Korea regards China as its key ally, ties between Pyongyang and Moscow stretch back to the early Cold War, when North Korea was heavily reliant on support from the Soviet Union. Kim Jong Un’s grandfather, the first and “eternal” president Kim Il Sung, was installed as North Korean leader by the Soviet Union in 1948.

North Korea's Kim in Russia for first talks with Putin