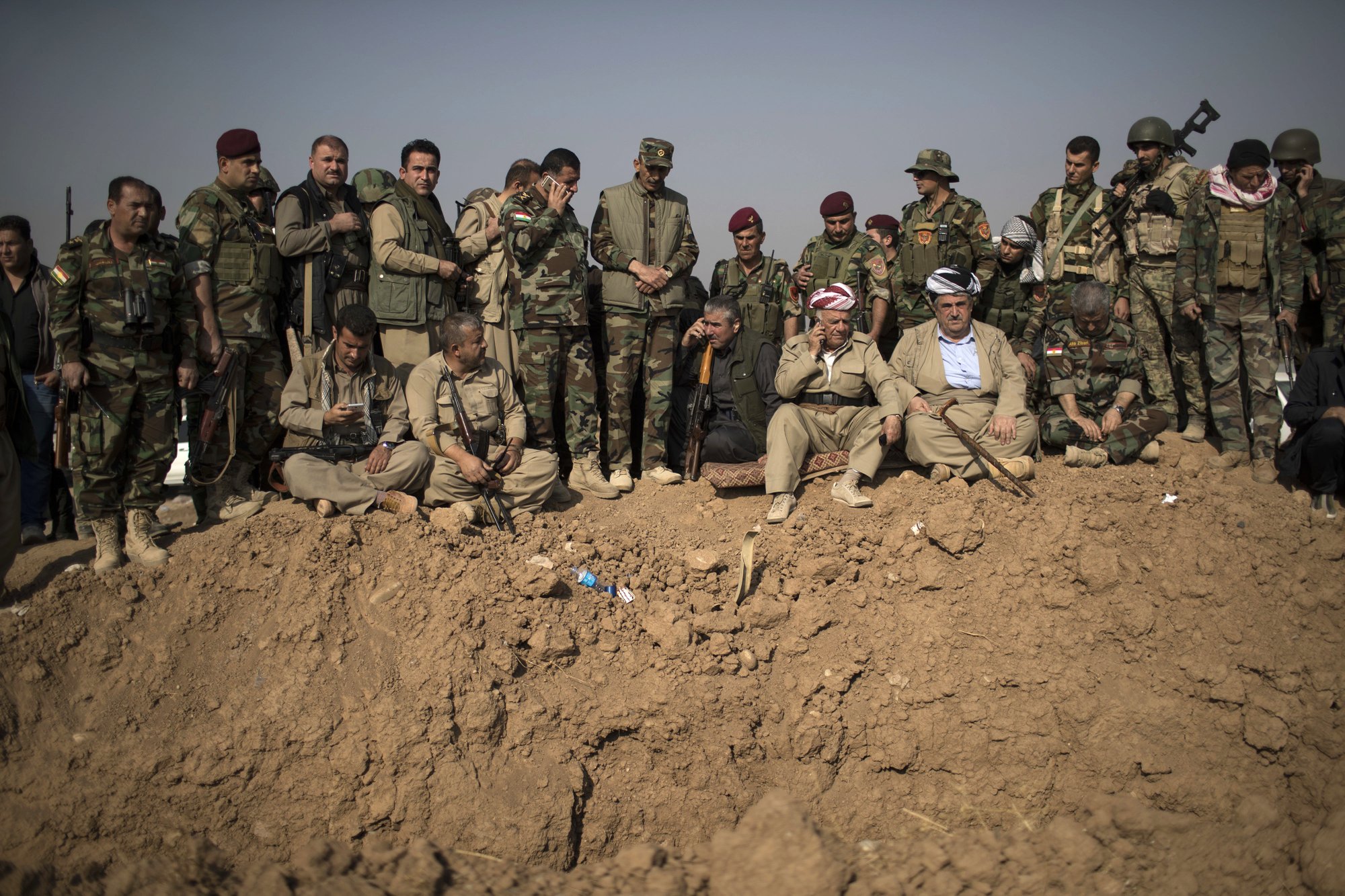 BEIRUT (AP) — They always anticipated US support would run out, but President Donald Trump’s abrupt decision to rapidly pull US forces out of northeast Syria has nevertheless stunned the Kurds there, who for the past three years have been America’s partner in fighting the Islamic State group.

A withdrawal will leave Syrian Kurds exposed to Turkish threats of an invasion from one side and Syrian government troops on the other.

It stung even more because the Kurds in the Middle East have been abandoned before by the United States and other international allies on whose support they’d pinned their aspirations.

What happens next is uncertain because of confusion in the US plans. Initially, Trump declared the pullout of the 2,000 American troops would happen “now,” but White House officials have since suggested it would not be immediate. Further muddling the policy, Trump’s national security adviser John Bolton, on a visit Monday, tried to win assurances from Turkey that Ankara would not harm the Kurds but was apparently snubbed.

Over the past century, Kurds have gotten close to setting up their own state or autonomous regions on several occasions, only to have their dreams shattered after being abandoned by world powers. An old Kurdish proverb reflects a history of disappointments: “We have no friends but the mountains.”

Here’s a look at that past:

WHO ARE THE KURDS?

The Kurds are an ethnic group numbering some 20 million people spread across four nations — 10 million in Turkey, 6 million in Iran, 3.5 million in Iraq, and a little over 2 million in Syria. They speak an Indo-European language, related to Iran’s Farsi, and are overwhelmingly Sunni Muslim.

The 191,000-square-kilometer (74,000-square-mile) Kurdish area arcs through a mountainous zone from southeast Turkey to the Zagros mountains in northwest Iran. They’re divided not only by borders but by tribal, political and factional splits that the regional powers have often used to manipulate them.

HISTORY OF STRUGGLE AND BETRAYALS

With the Ottoman Empire’s collapse after World War I, the Kurds were promised an independent homeland in the 1920 Treaty of Sevres. But the treaty was never ratified, and “Kurdistan” was carved up. A Kurdish state was briefly established with support from the Soviet Union in Mahabad, northern Iran, in January 1947, but it collapsed 11 months later.

Since then, there have been almost continuous Kurdish rebellions in Iran, Iraq and Turkey.

Over the following decades, two events have been burned in the Kurds’ memories as betrayals by Washington.

In 1972, the US helped arm the Iraqi Kurdish insurrection against Baghdad. It did so on behalf of Iran, then led by America’s ally, Shah Mohammad Reza Pahlavi, who was hoping to pressure the Iraqi government in an ongoing border dispute. Three years later, the shah signed a border agreement with Baghdad and shut off the weapons pipeline. Then-Kurdish leader Mustafa Barzani wrote an impassioned letter to US Secretary of State Henry Kissinger pleading for support, but the American help ended. The Iraqi government crushed the Kurdish rebellion.

Iraq’s Kurds rose up again, in the 1980s, with Iranian backing, during the Iran-Iraq war. Iraqi leader Saddam Hussein’s army waged a brutal scorched-earth campaign, using poison gas and forcibly resettling up to 100,000 Kurds in the southern desert.

The second event came in 1991, after the US-led Gulf War that liberated Kuwait from Iraqi forces. Then-President George H.W. Bush called on Iraqis to rise up against Saddam. The Kurds in the north and Shiite in the south revolted, at one point controlling 14 out of Iraq’s 18 provinces. Saddam responded with a brutal crackdown and while Bush had not explicitly promised support, Kurds and Shiites felt left in the lurch.

Still, a US-enforced no-fly zone over northern Iraq helped ensure a degree of Kurdish autonomy there. After Saddam’s fall in 2003, the US helped ensure that Iraq’s new constitution enshrined that autonomous zone. But Washington has drawn the line against Kurdish independence. In September 2017, a referendum in the self-rule region overwhelmingly backed independence. The US opposed it and the Baghdad government took over the zone’s border crossings and closed its airports for months, forcing the Kurds to back down.

IN SYRIA, EVERYTHING TO LOSE?

Syria’s Kurds have hoped for autonomy in the northeast corner of the country where their population is concentrated. The Damascus government has not allowed it, and Turkey is vehemently opposed to it. Ankara views the main Syrian Kurdish militia, which is linked to Kurdish insurgents in Turkey, as a terrorist group. During Syria’s civil war, as Damascus was busy in the fight against rebels, the Kurds succeeded in setting up a degree of self-rule that had been unthinkable before.

The US needed a partner on the ground to fight the Islamic State group after its takeover of the eastern and northern third of Syria, and found in the Kurds an effective, organized force. The US armed the Kurdish militia, along with some Syrian Arabs and Christian Assyrians, and backed them with US troops and airpower.

The Kurds had their own interest in allying with the Americans, hoping to give weight to their autonomy ambitions. It took more than a year of fighting, with thousands of Kurds killed, but IS was driven out of almost all the territory it once held.

Turkey sent troops into Syria in August 2016 to clear a border area from IS militants and limit Kurdish expansion. In early 2018 it overran the northwestern enclave of Afrin to oust the Kurdish militia, leading to the displacement of tens of thousands of Kurds while the US stood by and watched.

Now if the Americans leave, they stand to lose everything.

“So far it’s unclear what will happen, but the Syrian Kurds feel betrayed,” said Wladimir van Wilgenburg, an Iraq-based Kurdish affairs analyst. “They say they were the ones who sacrificed their sons and daughters in the fight against IS.”

The situation raises shades of Kissinger in the eyes of some Kurds, he said. “President Trump in the past praised Kurds as great fighters and great people,” said van Wilgenburg.

“Now he risks putting them in grave danger by pulling out … Turkey could attack them at any time.”

Kurds in Syria look to Russia after US withdrawal