Libya’s Prime Minister Fayez Sarraj will be representing only part of the country when he addresses the U.N. General Assembly on Wednesday.

His government has been battling for months to keep control of the capital, Tripoli, amid an offensive by forces aligned with a rival authority based in the country’s eastern portion.

Extremists, including those from the Islamic State group, have exploited the unrest to expand their reach.

With a long coastline on the Mediterranean, Libya also has become a major transit point for migrants seeking to escape conflict, persecution and poverty. Thousands are hoping to reach the shores of Europe despite reports of systematic abuse by traffickers in Libya, including beatings and sexual violence. A look at the devastation in Libya and its wider effects:

Sarraj’s U.N.-backed but weak administration holds Tripoli and parts of the west. The eastern government is aligned with Khalifa Hafter, the commander of the self-styled Libya National Army. Each side is supported by various militias and tribes.

Hifter, who was a military officer under Gadhafi before defecting in the 1980s, has presented himself as a strong leader who can unify the country. Yet, despite being the largest and best-organized force, the LNA hasn’t made significant progress in Tripoli.

Outside support adds fuel to the conflict. Hafter is backed by neighboring Egypt, the United Arab Emirates, Russia and France. Sarraj is aided by Turkey and Qatar, in addition to having the U.N.’s blessing.

Hafter’s surprise military offensive in April to take Tripoli has since stalled, raising fears of a protracted conflict descending into a new civil war.

Inspired by Arab Spring uprisings that swept the region, Libyans rose up against Gadhafi in February 2011. He responded with a fierce military crackdown and the rebellion quickly escalated into a civil war fueled by different militia groups.

NATO leaders from France, Britain and the United States stepped in with a bombing campaign against Gadhafi. He was eventually captured, beaten and killed by rebels in October 2011, with the bloody final moments of his life caught on video.

Libya held elections the next year, but the government was powerless to control the many militias, and the country’s democratic transition stalled. A loose alliance of militias seized Tripoli in 2014 after their rivals won disputed parliamentary elections. The new parliament relocated to eastern Libya and later allied itself with Hafter.

In 2015, the U.N. backed the formation of a transitional government in Tripoli led by Sarraj, a technocrat with no military experience. His government, which was forced to court powerful militias for its own protection, has proven incapable of achieving stability or of winning support from its rivals in the east.

Thousands have died in successive rounds of fighting since 2011. The World Health Organization said at least 1,000 people have been killed, including 106 civilians, since Hafter’s offensive on Tripoli began five months ago. By early August, the U.N. humanitarian agency said fighting for the capital had displaced more than 105,000 people

In a report to the UN Security Council last month, UN Secretary-General Antonio Guterres said Hifter’s offensive has “further polarized an already fragmented political landscape,” and he called for an end to the violence and the resumption of talks between the warring parties.

Libya continues to be a huge transit point for migrants attempting the dangerous sea voyage to Europe. The U.N.’s migration agency said 859 people have died in the Mediterranean as of Aug. 22, although not all of them set out from Libya.

Women who were held in detention centers before they reached Europe say they were systematically raped, and both men and women were sold to other traffickers for sex or labor. Victims described being whipped and beaten and given electric shocks, echoing allegations that government-linked detention centers in Libya are rife with abuse.

The battles among Libya’s factions add to the danger. In July, 53 people were killed by an airstrike on the migrant detention center in Tajoura, outside Tripoli. The center is still operating despite concerns about the arbitrary detention in appalling conditions.

About 5,000 men, women and children are being detained in Libya, including more than 3,000 who are in active conflict zones, according to the International Organization for Migration.

Meanwhile, the constant flow of those seeking a better life in Europe has fueled a rise of anti-migrant sentiments across the continent, and many governments have committed to reducing irregular migration. The European Union pays to train and equip the Libyan coast guard to intercept migrant vessels and return them to Libya.

By DREW CALLISTER and NOHA ELHENNAWY 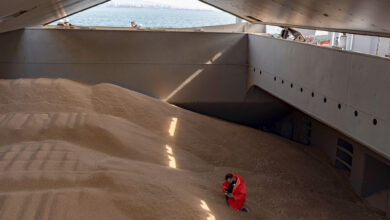