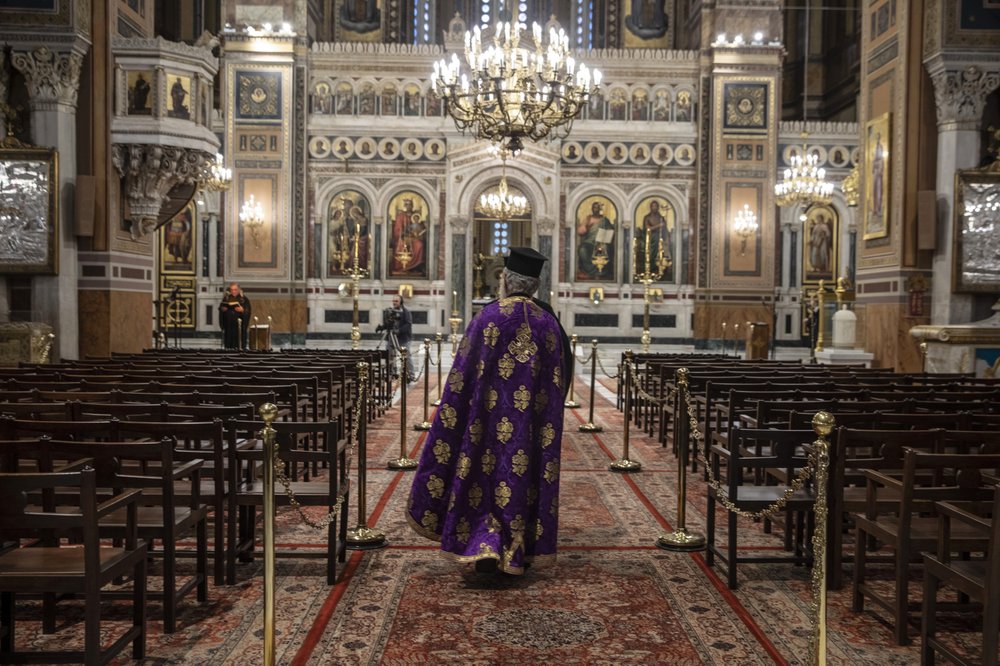 ATHENS, Greece (AP) — For Orthodox Christians, this is normally a time of reflection and mourning followed by joyful release, of centuries-old ceremonies steeped in symbolism and tradition.

But this year, Easter — by far the most significant religious holiday for the world’s roughly 300 million Orthodox — has essentially been cancelled.

There will be no Good Friday processions behind the flower-bedecked symbolic bier of Christ, to the haunting hymn of the Virgin Mary’s lament for the death of her son. No hugs and kisses, or joyous proclamations of “Christ is risen!” as church bells ring at midnight on Holy Saturday. No family gatherings over lamb roasted whole on a spit for an Easter lunch stretching into the soft spring evening.

As the coronavirus rampages across the globe, claiming tens of thousands of lives, governments have imposed lockdowns in a desperate bid to halt the pandemic. Businesses have been closed and church doors shut to prevent the virus’s insidious spread.

For some, the restrictions during Easter are particularly tough.

“When there was freedom and you didn’t go somewhere, it didn’t bother you,” said Christina Fenesaki while shopping in Athens’ main meat market for lamb — to cook in the oven at home in the Greek capital instead of on a spit in her ancestral village. “But now that we have the restrictions, it bothers you a lot. It’s heavy.”

In Greece, where more than 90 percent of the population is baptized into the Orthodox Church, the government has been at pains to stress that this year’s Easter cannot be normal.

It imposed a lockdown early on, and so far has managed to keep the number of deaths and critically ill people low — 105 and 69 respectively as of Thursday, among a population of nearly 11 million.

But officials fear any slippage in social distancing could have dire consequences, particularly during a holiday that normally sees people cram into churches and flock to the countryside. Roadblocks have been set up, and fines doubled to 300 euros (US$325), for anyone found driving without justification during the holiday.

Easter services will be held behind closed doors with only the priest and essential staff. They will be broadcast live on television and streamed on the internet.

One particularly complex issue is how to handle the “Holy Light,” the flame distributed throughout the Orthodox world each year from the Church of the Holy Sepulchre in Jerusalem to mark the resurrection of Christ.

Greek and Russian authorities have arranged to pick the flame up from Israel, but will not distribute it. Cyprus won’t even pick it up; there is “no need,” the island nation’s Archbishop Chrysostomos said.

“Today, faith is not at risk but the faithful are,” said Cyprus President Nicos Anastasiades.

Patriarch Bartholomew I, spiritual leader of the world’s Orthodox, has urged the faithful to adhere to government measures and World Health Organization guidelines. But keeping people out of churches has not proved easy.

In Serbia and North Macedonia, authorities imposed nationwide curfews from Good Friday through Easter Monday. Ethiopia, with the largest Orthodox population outside Europe, also restricted access to liturgies and deployed security outside churches. Liturgies are broadcast live, although several churches outside the capital, Addis Ababa, were violating restrictions, alarming authorities.

But in some Orthodox countries, such as Georgia and Bulgaria, limited church services will go ahead.

In Greece, after days of delicate diplomacy with the country’s powerful Orthodox Church, the government banned the public from all services after the church’s governing body imposed restrictions but not a full shutdown. Authorities also quickly scotched a Greek mayor’s plans to distribute the “Holy Light” door-to-door throughout his municipality just after midnight on Saturday.

Some priests have defied the shutdown. One recently offered communion — where the faithful sip from the same spoon — through an Athens church’s back door.

Closing churches during Easter has been hard on Russians used to attending services. Many have turned to the internet and video conference prayers.

“At first it was just a shock,” said believer Andrei Vasenev. “How is that possible – not go to church? But then we realized it was a matter of finding a way.”

Vasenev, two dozen others and a priest from his parish have started praying via Zoom and plan to do the same during Easter. For him, going to church is about community, and Zoom prayers keep this community together.

For Anna Sytina, another participant of the online prayers, the hardest part is being away from people and the warmth of human contact. “There’s a moment in a liturgy when you kiss each other three times,” Sytina said. “Now we see each other on monitors and displays.”

Both are prepared to pray at home for as long as it takes. “It is a sacrifice in the life of every believer, but it is necessary,” Sytina said.

It is a sentiment echoed in Greece.

“Each person has the church inside of them,” said Kleanthis Tsironis, who heads Athens’ main meat market. He will spend Easter at home with his wife and two daughters, and will miss the resurrection liturgy. But churches will eventually open, he said, and Easter traditions will return.

“Souls are being lost,” he said of the virus deaths across the world. “And we’re going to sit and cry because we didn’t roast on a spit? We’ll do that later, when the measures are over.”

By ELENA BECATOROS and DARIA LITVINOVA

Image: In this Monday, April 13, 2020, photo a priest takes part in a Holy Monday ceremony held without worshippers at the Athens Cathedral, in Greece, during a lockdown order by the government to prevent the spread of the coronavirus. For Orthodox Christians, this is normally a time of reflection and communal mourning followed by joyful release, of centuries-old ceremonies steeped in symbolism and tradition. But this year, Easter – by far the most significant religious holiday for the world’s roughly 300 million Orthodox – has essentially been cancelled. (AP Photo/Petros Giannakouris)

Pope to livestream Easter mass to locked down world